Is PARTY OF FIVE's Emily Tosta An Illegal Immigrant? I have never heard of Emily Tosta, but apparently she is a minor television actress in the nether world between real American television and the telenovelas (which are basically booby shows) in Latin America. Tosta is also not an American citizen or legal permanent resident. While that is not unusual in the acting business, her only claim to any “extraordinary ability” appears to be that she can sing, dance, and act, after a fashion, in both English and Spanish.

Tosta, full name Emilia Gabriela Attias Tosta, has been chosen for a politically correct remake of a television show I never saw, Party of Five. Originally about white orphans, now the story of anchor babies left in the United States after their parents have been deported. And how apt this is, as Tosta has her own immigration problems—as does the United States with immigration laws not being enforced.

“It’s definitely very fearful because you never know. You just never know what can happen,” Emily Tosta admits on an early January afternoon from a seat at the corner of the W Hollywood hotel bar. With its winding staircase and notice-me glam color palette of black-fuchsia-and-shine, this is a space made for boozy biz schmoozing. Tosta’s unvarnished honesty — and responsible-for-3-p.m. glass of water — stands in stark contrast with her surroundings.

The 21-year-old actress, whose new Freeform series Party of Five premieres on January 8, could easily be describing her reboot of the classic ‘90s family dramedy of the same name. The tragedy at the heart of the original Party — about five abruptly orphaned siblings — was a drunk driving accident that killed the innocent Salinger parents. While the 2020 version characters are analogues of the originals — Tosta’s Lucia is the new Julia (Neve Campbell), Emilio (13 Reasons Why’s Brandon Larracuente) is the updated de facto patriarch Charlie (Matthew Fox); Beto (Niko Guardado) is Bailey (Scott Wolf); Valentina (Elle Paris Legaspi) is Claudia (Mean Girls’ Lacey Chabert); baby Rafael is baby Owen — the updated of the story is painfully, necessarily topical. Death doesn’t separate the Acosta clan — borders and immigration laws do. Tostas’ [sic] straight-A student-turned-fearless social activist Lucia and her four siblings are left to fend for themselves after their parents (Fernanda Urrejola and Bruno Bichir) are deported by ICE. 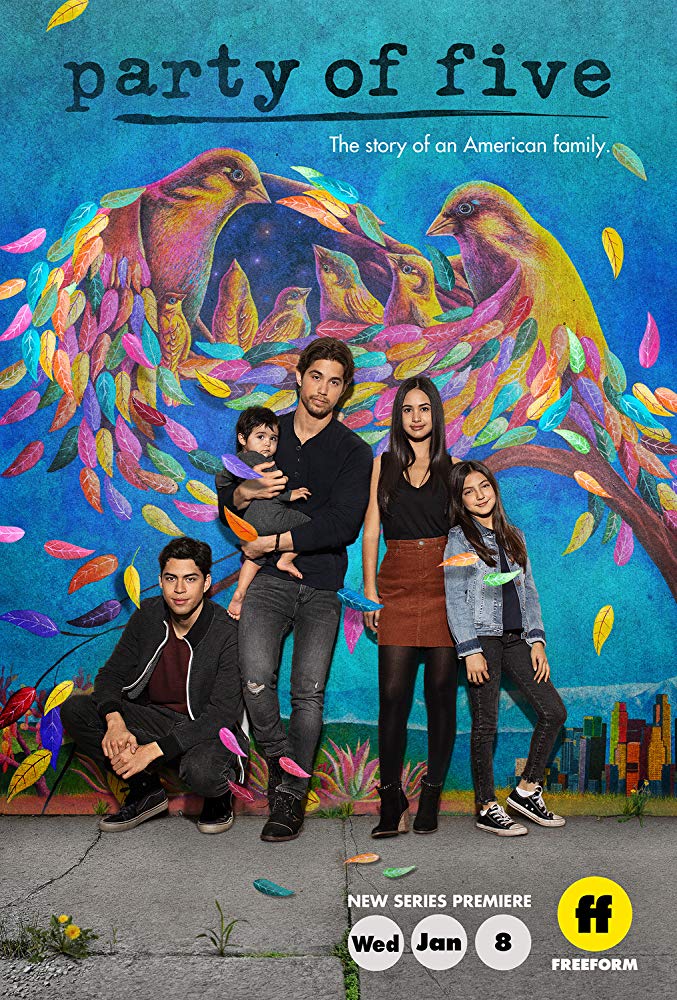 And she fears as well, and why? Because she is in the United States illegally herself, despite certain appearances of legality.

Tosta, a Dominican Republic-born actress with Venezuelan roots, came to the United States on a tourist visa almost a decade ago, hungry for the American dream. Now she can see her face splashed on billboards five stories high in Times Square for a drama proudly tackling the true-to-life fallout of American immigration policy. While many would grab that ticket to fame and silently ride it all the way to uncomplicated luxury, Tosta is sharing her story to make the world feel just a little less scary for everyone else — and she isn’t holding a single secret back.

Well, that is illegal. You cannot use a tourist visa to come to the United States to pursue the American dream. The B-2 Non-Immigrant Visa (NIV) is for tourists and other temporary visitors neither living in the United States or working. From the Department of State website on what B-2 NIV holders cannot do:

These are some examples of activities that require different categories of visas and cannot be done while on a visitor visa:

Study
Employment
Paid performances, or any professional performance before a paying audience
Arrival as a crewmember on a ship or aircraft
Work as foreign press, in radio, film, print journalism, or other information media
Permanent residence in the United States

Pursuing a career in music and acting is not one of those things one can legally do in the United States on a tourist visa. And that was her and her mother’s intent when she was brought to the United States.

Unfortunately, since then, she has been working illegally in the United States since her initial entry at the age of 12.

Emily then decided to expand her career and moved to sunny Miami, FL when she was 12 years old. Over there, Emily booked roles in short films such as ‘Just Do Good’ and ‘Trapped.’ She guest-starred in Telemundo’s ‘Dama Y Obrero’ and also booked a lead role on the web-series ‘United Families.’ Additionally, Emily did a news segment for Univision’s Generacion 23. However, it doesn’t stop there, she did her first professional singing gig at age twelve when she performed the National Anthem in a recognition act in the city of Miami for the Supreme Court Judge of The United States of America. That led her to continue her music career by singing at events such as The Pub Club Opening, events by the American Cancer Society Fundraiser, events related to the Venezuelan Elections, and many others.

You certainly cannot do a professional singing gig when in the United States on a tourist visa, nor may you act in films or television. It appears Telemundo is hiring illegals.

However, things are getting worse, for the principle of adherence by visitors to our immigration laws. It appears that Tosta has gamed the system and unlawfully obtained a second NIV, this time a 0-1B, an NIV for ” individuals with an extraordinary ability in the arts or extraordinary achievement in motion picture or television industry[.]” This NIV is for actors and actresses of the aforementioned “extraordinary ability.”

“I’m still [in the United States] on a work visa. I’m not even a resident,” Tosta, who also appears in FX’s Sons of Anarchy biker gang spin-off Mayans M.C., says over piquant pesto hummus. She arrived in Miami at age 12 with her mother Emilia Tosta. Neither women knew English at the time but were determined to make Emily’s acting ambitions a reality (Emilia still primarily speaks Spanish). Tween Emily soon acquired a work visa through an acting gig in the Florida city. Emily was then able to extend her visa to her mom, who still travels with her everywhere to this day.

While Tosta may be an actress, she is not of an extraordinary ability, but more importantly she was ineligible for that NIV without two important things, first a waiver of her previous unlawful presence due to intended immigrant status, i.e., she came not to the United States as a tourist, but intending to live here, and her illegal work, and second, is not in the United States temporarily as an actress, but is living here illegally, i.e. using an NIV to live here permanently.

It is fundamental principle of American immigration law that an alien entering the United States on an NIV must have an unrelinquished residence abroad, but Tosta is here permanently, using NIVs to live here illegally, first a tourist visa, now a temporary work visa, until she can finagle a green card. And she knows this, and she is afraid, very afraid her scheme will be found out, but she isn’t too bright, as she is telling the world. Perhaps she thinks she is above the law? Likely.

“It was definitely fearful at first because I was like, ‘Am I supposed to be talking about this?’ Especially in the current political climate that we live in,” Tosta says of speaking openly about her complex immigration journey. “But at the same time, you just have to have faith in yourself and try to be a voice for those people [in similar situations]. Honestly, I was like, Eff it. I’m just going to go for it, because I’m just going to be that person for other teenage girls. Hopefully it works out.”

And there it is, Tosta is giving all Americans the giant middle finger, she doesn’t care that she is here illegally. Especially note that O-1B NIV holders must depart the United States once any particular project is done. They cannot just hang around until the next job.

Let us address the “extraordinary ability” issue. While Tosta may be an accomplished actress, she is in no way “extraordinary” in her abilities. Thousands of Americans can sing, dance, and act in English and Spanish. She has never starred in a major motion picture or major Broadway production. Her performance as a child’s show co-hostess  is nothing unusual among Latin American actresses. I don’t know Liam Neeson’s immigration status, but he, and others like that, are what an O-1B NIV is for, and Tosta is no Liam Neeson.

Emily Tosta, Illegal Alien, Not Of An Extraordinary Ability

Tosta’s fraud scheme is not just this; she extended the fraud to her mother, obtaining presumably an O-2 NIV for her mother, though the story does not say which NIV her mother has. And note that parents are not eligible for an O-3 visa, which is for spouses and minor children of O-1B NIV holders.

Emily was then able to extend her visa to her mom, who still travels with her everywhere to this day.

O-2: individuals who will accompany an O-1, artist or athlete, to assist in a specific event or performance. For an O-1A, the O-2’s assistance must be an “integral part” of the O-1A’s activity. For an O-1B, the O-2’s assistance must be “essential” to the completion of the O-1B’s production. The O-2 worker has critical skills and experience with the O-1 that cannot be readily performed by a U.S. worker and which are essential to the successful performance of the O-1[.]

Now, what does mom do that is so essential to Tosta’s singing and acting? I can’t imagine anything other than the human equivalent of the companion animals that are so annoying on airplanes and in public now. In fact, the O-2 visa issued to Tosta’s mother is fraudulent, and a criminal act of visa fraud, prohibited by Title 18 United States Code, Section 1546, Fraud and Misuse of Visas. And Emily Tosta is the fount of that fraud.

Time for Ken Cuccinelli to get ICE SVU to make an arrest or two of the Tosta family immigration crime wave.