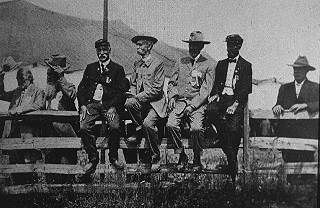 Re: Pat Buchanan's The Confederate Flag Is Not A Symbol Of Hatred–It Is An OBJECT Of Hatred

Y'all have probably already seen this, but just in case not, here it it.

Regarding the Social Justice Warrior campaign to purge all mention of anything Confederate, a contributor to American Renaissance wrote a fact-filled piece reporting how and why the Yankees who actually fought in the Civil War/War Of Northern Aggression respected Confederates.

A most informative and persuasive discussion.

What Happened to the Warrior’s Ethic?

Yankees respected Confederates. Why must we despise them today?

James Fulford writes: A 2002 column by Sam Francis is worth reading on this—Sam was responding to historian David Brion Davis's The Terrible Cost of Reconciliation, New York Review of Books, July 18, 2002.

By 1913, the 50th anniversary of the Battle of Gettysburg, surviving veterans of both sides met amicably in their uniforms as “the ultimate triumph of national reconciliation at the African-Americans' expense.”

“Try to imagine German veterans, in full Nazi uniform, shaking hands in 1994 with American veterans in uniform at the beaches of Normandy,” urges Mr. Davis.

Actually, you don't have to imagine it; such meetings have occurred, and why shouldn't they?