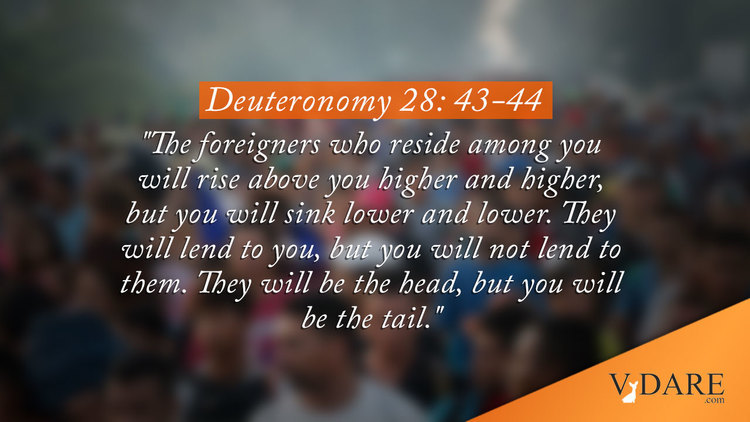 A Southern Reader Says There Are NO Arguments (Economic, Social, Or Scriptural) That Can Justify Mass Immigration

Re: James Kirkpatrick's blog post Replacement Migration In The Bible

There are no moral, social, economic or environmental reasons for the type and amount of immigration invasion we are now experiencing.

Harvard Professor George Borjas, as VDARE has written about several times, settled the economic argument. Any profits from immigration go to those who hire immigrants and the immigrants themselves.

The more diverse a community the less social capital and civic involvement causing the social structure to break apart.

Billionaire globalist David Gelbaum settled the environmental argument when he bribed the Sierra Club with $100 million dollars in 2006 to never mention the harm immigration does to the environment ever again.

That’s the Catholic view—Jeff Sessions, a Methodist, speaking as Attorney General, quoted scripture to explain why it’s moral for the US to enforce immigration laws.

Once you are clear in your head that there are no social, economic, environmental or moral reasons for the erasure and replacement of your people via massive immigration you no longer waste time listening to those who think they have some moral high ground on immigration. No one can guilt trip you. No one can make you doubt your own eyes.

Once immigration becomes a problem for those who are pushing it down our throats it will stop very quickly. Having a foundation for your immigration beliefs while waiting for that to happen is very helpful. Remember, there are no social, economic , environmental or moral reasons for what is happening. The Emperor has no clothes.