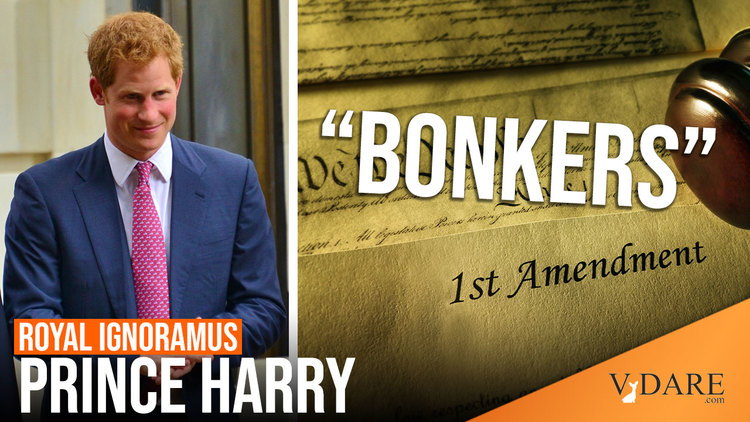 Harry, his camp follower in tow, (or is it the other way ‘round?) is proving he should have stayed in the Army where he did some good. He is even more vacuous than his great-great-uncle, the Duke of Windsor, who together with his strumpet at least didn’t whine as they gallivanted through high society and had sense enough not to make foolish comments about subjects of which they knew nothing.

Harry, on the other hand, can’t contain himself; he’s bursting at the seams to reveal his ignorance on a variety of topics, latest being the American Constitution which for him is as mysterious as the conjuring of Macbeth’s three witches. The young former Prince declared the First Amendment to the American Constitution to be “bonkers” [Prince Harry’s attack on First Amendment was 'calculated' - 'Should know better!', by Kyle Farrell, May 25, 2021].

The vagabond prince understands neither American history, nor English history. To wit: free speech arose from the religious disputes of the English Civil War. Freedom of religion and speech, they are tied together, was first enunciated in America by Roger Williams the founder of the Rhode Island colony.

The great blow for freedom of speech and press against the Common Law’s odious libel statutes was struck by Andrew Hamilton’s victory for the defense in Crown v. Zenger, which first set forth the principle that “truth was its own defense.” The struggle for freedom of speech and press was in gear in Britain, too, where there was fear that George III, the first Hanoverian to speak fluent English, could revert to an authoritarian tyranny, a fear felt acutely by the Whigs.

John Wilkes, the Whig pamphleteer and politician, and MP, was in the government’s sights because of his essay in 45 North Briton attacking the King’s speech, but too well known for them to act too radically. English liberties, laid down in Magna Carta, had been reinforced by the Bill of Right in 1689, which also recognized a right to own arms. Today, because of the malice of Labour and the gutless stupidity of the Tories free speech in Britain is critically ill and self-defense is a crime. Poor benighted Harry needs to brush up on his history.

He could start with that honorary American citizen who “mobilized the English language and sent it into battle,” Winston Churchill whose History of the English-Speaking Peoples would reveal to him why that “bonkers” First Amendment is the first guarantee of liberty.