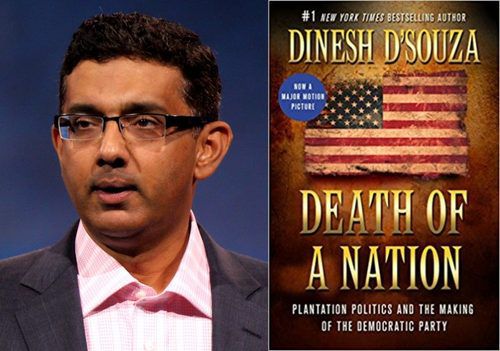 From: Bob Johnson [Email him]

Yesterday is went to the local movieplex to see the new documentary movie Death Of A Nation.

What caught my attention was Spencer’s reference to H-1b visas.

You can find read a discussion, excerpt at Fox News: Dinesh D'Souza: If you think Trump is a white supremacist, you should talk to a real one, By Dinesh D'Souza, July 27, 2018.

D’Souza: Would it be fair to say you are not just against illegal immigration but immigration, period?

D’Souza: Would you be happy with an immigration policy that said, we want people from New Zealand, Australia, white guys from Europe and South Africa. We don’t want people from Barbados or Bombay.

Spencer: Yes, and that was the immigration policy beginning in 1924 up until 1965. That period of time coincided with American greatness.

D’Souza: Now this seems very different than Trump. Trump was quoted in the paper saying, if there’s an Indian guy working in Silicon Valley and his visa runs out, and we have to send him home, that’s a loss. That’s something we should try to prevent. You disagree?

See how distant Spencer’s politics are from Trump’s? [Links added by VDARE.com.]

Unfortunately there was no discussion of the various issues and problems with the H-1b program.

And it appears Dinesh D’Souza failed to address these problems.