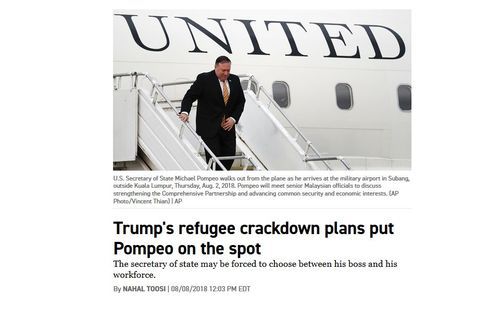 A West Coast Reader Says On Refugee Policy, Mike Pompeo Should Ignore State Department Staffers, And Listen To His Boss

From: A West Coast Reader [Email him]

It looks like it's crunch time over at Foggy Bottom and that Secretary Of State Mike Pompeo is going to have to decide who butters his bread. America First Patriot Stephen Miller is pushing for a lowering of the number of refugees we admit and this is setting the teeth of the Deep State stooges at State on edge. [Trump's Refugee Crackdown Plan Puts Pompeo On The Spot, by Nahal Toosi, Politico, August 8, 2018.]

Mr. Pompeo's choice is between siding firmly with the President's pro American policies and placating his pussyfooting work force. All bets are off and some have noted that Mr. Pompeo has "evolved" on some issues and that since becoming Secretary has adopted "a more global perspective" and has "bureaucratic turf to protect".

I can say with assurance that immigration patriots are against all instances of "evolving" and don't care a flip either about foreign perspectives or bureaucratic turf. And when Noah Gottschalk [Email him] of Oxfam America tosses out the parade of horribles including a "world crisis" if Pompeo doesn't buckle and truckle we remain studiously indifferent—we are concerned only about America's crisis. As a congressman Mr. Pompeo was fairly hardline on refugee admissions and here's hoping he remains a stalwart. Given the political mood of the President's base his political future may depend on it—not to mention America's.