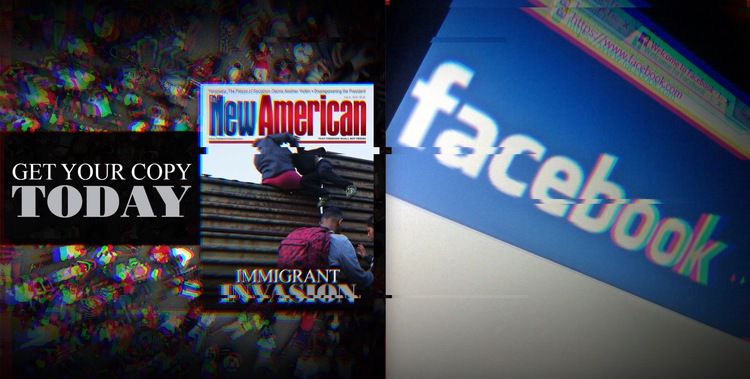 See, earlier, A Reader Says We Should Actually Read The New American

From: A John Birch Society Fan [Email him]

So now, the words “immigrant” and “invasion” are “hate speech,” particularly if used with a news photo of illegal aliens scaling a border wall.

The SJWs wrote that the cover “goes against our Community standards on hate speech.”

Zuckerberg’s minions probably didn’t read the piece, but merely melted down when they saw the cover. But even if they had read it, as I did, they wouldn’t have found anything “hateful” in it. Then again, according to them, opposing Open Borders is hate speech.

And blocking that one “offensive” post wasn’t enough. Facebook fortified its penalty by blocking “ad breaks” that monetize videos as well, which means JBS lost a revenue stream for 30 days, and then warned that “that the restriction will be extended to three months if JBS has another Community Standards violation within 90 days.”

The venerable conservative group, which Bill Buckley famously smeared, is interested in myriad issues, most notably globalization, how the Left is using the climate scam to impose socialist tyranny, and the transnational elitist conspiracy—via such nefarious actors as the Bilderbergers, the Trilateral Commission, and Council on Foreign Relations—to control and manipulate the world economy and U.S. foreign policy to usher in the brave New World Order. In other words, One-World Government.

Otherwise, JBS focuses on issues little different than those of concern to the Family Research Council or any garden-variety patriotic group: traditional morals, Cultural Marxism, limited government, and the perversion of the Constitution.

The idea that JBS or its magazine publishes “hate speech” is absurd, but shows just how far down the tracks the tech totalitarians’ train has gone.

James Fulford writes: This, like the attacks from the Left on Yoram Hazony's National Conservatism conference, is an example of how there's no point in giving in to the Left's "moral high ground" on hate. From the official John Birch Society website's "Myths vs Facts" section:

Myth: The JBS message is hate-filled.-

Fact: There never has been any hate in our agenda and it will never be employed as a tactic. From the outset, membership in JBS has been strictly denied to haters and, should any member adopt a racist or anti-Semitic attitude or behavior, the membership of such a person will be permanently revoked.