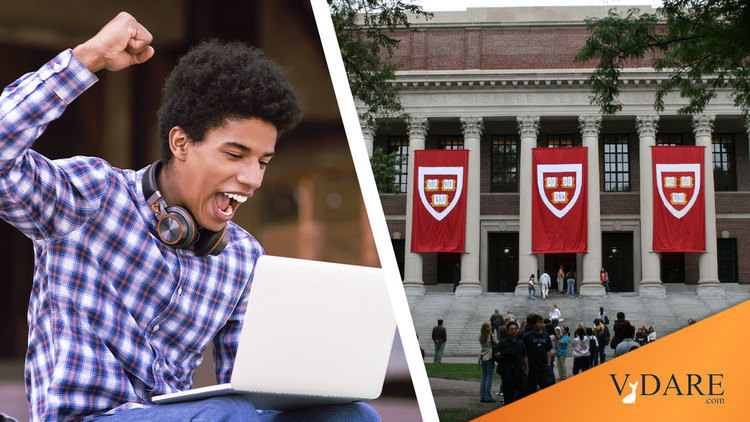 "While about 8 percent, or about 530, of Harvard's undergraduates were black, Lani Guinier, a Harvard law professor, and Henry Louis Gates Jr., the chairman of Harvard's African and African-American studies department, pointed out that the majority of them — perhaps as many as two-thirds — were West Indian and African immigrants or their children, or to a lesser extent, children of biracial couples.

"They said that only about a third of the students were from families in which all four grandparents were born in this country, descendants of slaves. Many argue that it was students like these, disadvantaged by the legacy of Jim Crow laws, segregation and decades of racism, poverty and inferior schools, who were intended as principal beneficiaries of affirmative action in university admissions."

This is a rare example of black leaders protesting one of the strangest wrinkles in American social policy: the rarely-mentioned fact that immigrants benefit from affirmative action policies invented for the descendents of slaves … and virtually nobody objects. (At least in public.)

After all, the ancestors of native-born African-Americans didn't ask to be dragged here. But immigrants chose America, presumably warts and all.

Why they should receive racial privileges as well?

Yet opponents typically attack at quotas' strongest emotional point—that they are somehow compensation for the lingering effects of slavery and Jim Crow—rather than their weakest point—the Bizarro World aspect of giving privileges to newcomers as soon as they get off the plane.

The personal motivation of Gates, who has risen to be (as he likes to joke) "the head Negro in charge" of African-American studies in this country, is straight-forward.

He's one of the few members of the black academic elite whose background is typical for the average middle-aged African-American. Gates' father was a millworker in West Virginia.

The background of Guinier, whose nomination to a high post in the Clinton Administration was famously killed by Clint Bolick's skewering her as a "quota queen," is more complicated. She is exactly the kind of dubious affirmative action beneficiary she is protesting.

Guinier looks like she could be the late Gilda Radner's half-sister because her mother was Jewish. Her Jamaican-born father Ewart Guinier was a prominent Communist Party USA labor leader. Much of her career has been an extrapolation of themes from his life. For example, she advocates the kind of complex multiple voting schemes that helped the CPUSA elect two New York City councilmen during her father's heyday, before the CIO expelled his union for being a Stalinist front.

Most black activists are purely race-oriented. They don't care whether quotas benefit rich or poor, as long as they're black. But Guinier's Marxist upbringing must make her feel guilty about class. She knows that affirmative action at Harvard doesn't do anything significant for poor blacks, from here or abroad. Even Harvard's American black students tend to come from well-to-do families. (One rumor is that, many years ago, Harvard decided not to accept any more ghetto kids after some unfortunate incidents.)

Paradoxically, although Gates and Guinier are protesting affirmative action for black immigrants, they offer no complaints about quotas for Hispanic immigrants.

Why are black leaders silent about immigrants benefiting from preferences - which often annoys their constituents? Likewise, why do elite blacks support mass Hispanic immigration—although the black man in the street is downright suspicious of it?

Harvard is a good case study of how the mechanics of quotas drive the politics of immigration.

The University has a relatively fixed quota of 8 percent for blacks. So, if a newcomer from Nigeria's wa-benzi elite or from Jamaica's mulatto middle class gets into Harvard, that means a black American won't get in.

It's a zero-sum game.

For the same reason, casino-owning Indian tribes often engage in brutal internal struggles over how many slices of the pie they must hand out. Since Congress allows each "nation" to build one casino, it has become common for the dominant faction in tribes to expel members to increase the gambling rake-off for those remaining.

Native born blacks compete with black immigrants to get into Harvard, but not with Hispanic immigrants. They enjoy a separate quota. So black activists have generally supported massive Latino immigration, even though it undermines the wages of unskilled black workers. What black "civil rights leaders" care about is delivering affirmative action pork. They think the growth of the Hispanic vote means more political support for quotas. Recall how the Hispandering Bush Administration filed a brief in the Grutter case that signaled to Sandra Day O'Connor that she should vote to preserve quotas at the U. of Michigan.

But in the long run, the growth of Hispanics does threaten racial preferences—by exacerbating the costs that individual whites pay.

The current liberal dispensation is built on the assumption that the white majority will graciously allow quotas for the black minority—because the cost per individual white is small. 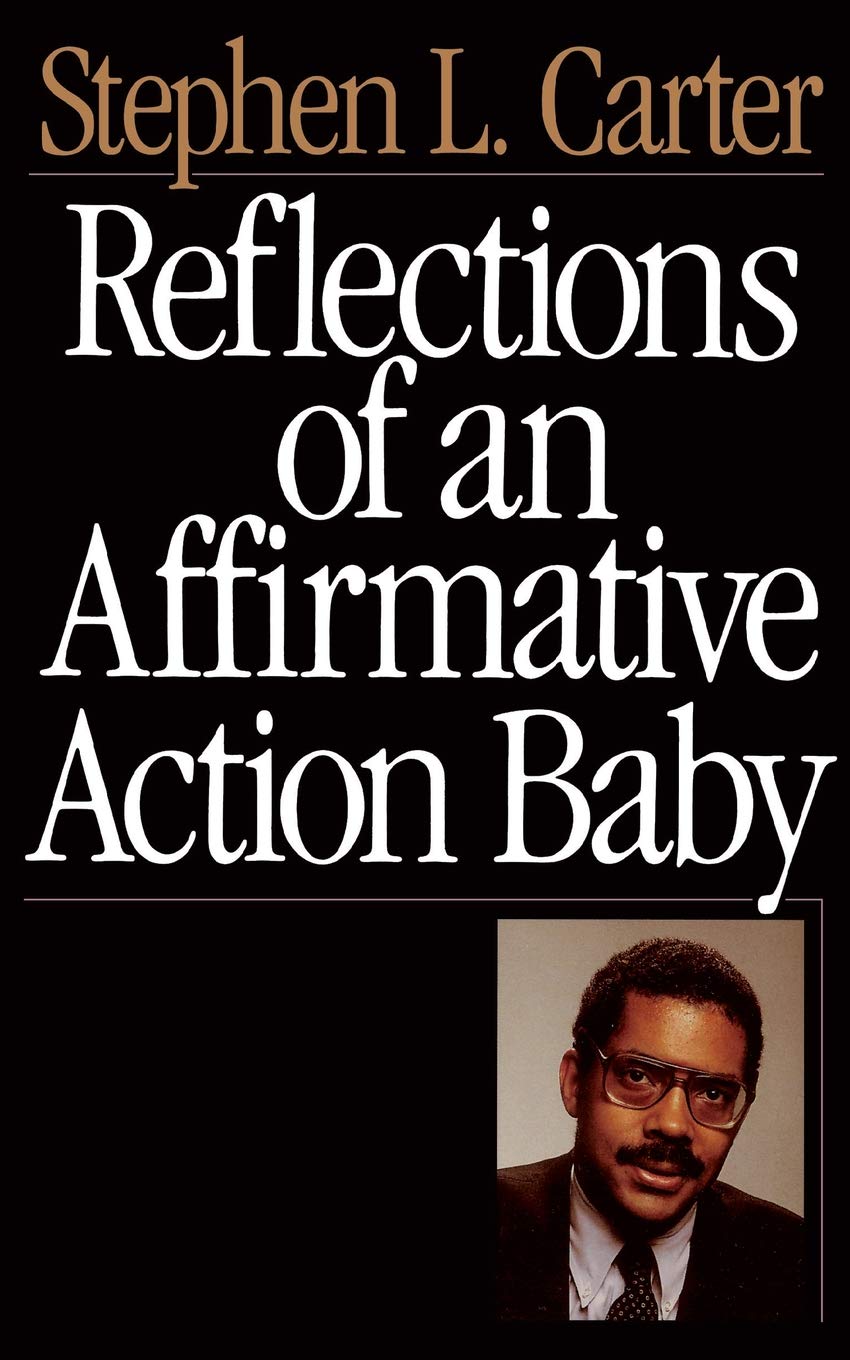 However, as black Yale law professor Stephen L. Carter, author of Reflections of an Affirmative Action Baby, caustically wrote in his massive and impressive detective novel The Emperor of Ocean Park,

"Last year, I greatly upset the students in my seminar on Law and Social Movements by suggesting to them the following proposition: 'Any white person who truly believes in affirmative action should be willing to pledge that, if his or her child is admitted to a Harvard or a Princeton, he or she will at once write to the school saying, "My child will not be attending. Please hold the slot for a member of a minority group."'

"The consternation among my students confirmed my belief that few white people, even among the most liberal, support affirmative action when it actually costs them something. They like it precisely because they can tell themselves that they are working for racial justice while pretending that the costs do not exist.

"But it is not their fault: who believes in sacrifice these days?"

And Hispanic immigration is overwhelming what once seemed like a demographically stable black-white understanding.

The key variable is what I have called  the 'racial ratio.' This measure refers to how many whites there are to shoulder the cost of preferences, relative to each "protected" minority member. As the proportion of whites to other races shrinks due to immigration-driven demographic change, the higher the cost to the individual white. As the burden of preferences grows, white Americans will feel increasing resentment.

As the size of quotas reserved for Hispanics rises, due to immigration, it will become ever harder for liberal whites to kid themselves that they and their children don't have to pay a price.

Due to Hispanic immigration, by 2100, the cost of affirmative action per white person in jobs and college admissions foregone is likely to be about an order of magnitude greater than when quotas were initiated 35 years ago.

In response, the country will increasingly divide politically over affirmative action and multiculturalism. The trend is already well underway. In the 2002 House races, 92% of the GOP's vote came from whites (up from 90% in 2000), while only 69% of the Democratic voters were white (down from 71%). As the percentage of white voters in the overall electorate falls toward 50%, the Democrats will become the Nonwhite Party and the Republicans the White Party.

Politics will become more volatile and ugly as disputes over ideology—like today's stem cell issue, which is the kind of benign moral controversy we will look back on with envy—are shunted aside by Yugoslavian-style grappling over the red meat: which races get which government goodies, and which races pay for them.

This heightened racial tension won't be good for the average black. But it will benefit the careers of black leaders for a while longer.

America, of course, will be torn apart.