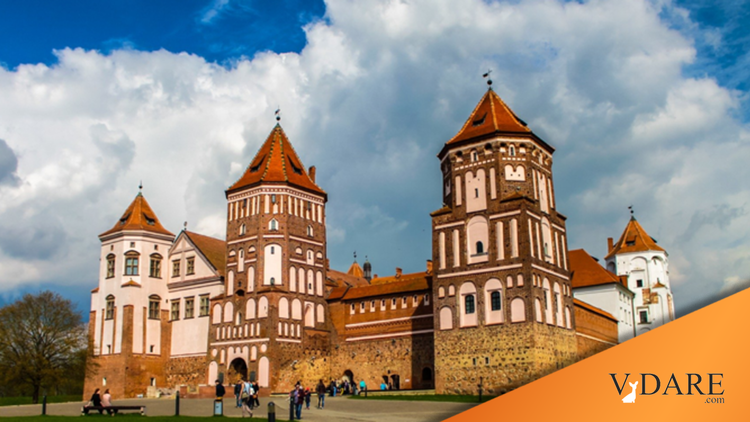 An Australian Reader Describes His Non-Lockdown Experience In Whitopian Belarus

[John Derbyshire had a brief segment about Belarus in the August 14th Radio Derb, at 32m40s here. It prompted the following letter from a listener.]

From: An Australian Reader [Email him]

Thanks to John Derbyshire for his piece on Belarus, where I recently spent four weeks.

I'm Australian and found myself stuck in the US for several months longer than I intended. I was given 60 days extension of my Electronic System for Travel Authorization (ESTA) visa from early April, so I had to leave by June 10th. Basically, I had to find a country that would let me sit out the virus for a month or so before others relaxed their immigration rules. I could have returned to Australia but am very glad I didn’t. I would now be under house arrest in my home town/prison of Melbourne [Coronavirus: Melbourne lockdown to keep a million workers at home, BBC, August 3, 2020].

My other no-lockdown option was Sweden but the Swedish authorities politely explained to me that if I turned up at Stockholm Airport, I had only a 50-50 chance of being admitted, as I don’t have any business or family ties to the country.

So I booked a flight to Minsk and an apartment in the city center. There was effectively no quarantine. Shops, bars, restaurants and hotels were all open and life was completely normal. During the four weeks I was there, I didn't wear a mask once.

Minsk is a city worth visiting. And here are my five reasons to go.

1. The architecture is amazing. The city was almost completely destroyed in WW2, so when the Soviets took control again in 1945, they decided to reconstruct it as a tribute to Soviet Realism, which meant ramrod straight, very wide avenues, huge buildings and lots of statues and bas-reliefs glorifying the workers and peasants. You can still see a few examples of this in other Eastern European cities, such as Warsaw or Bratislava but, Minsk is absolutely monumental in the amount of Soviet grandeur it displays and I spent my whole stay there marvelling at it all.

2. It is now very easy to gain entry. Westerners can stay visa-free for up to 30 days and during the coronavirus scare, you can extend this to up to 90 days. Belarus is the least-visited country in Europe and they would love to have a viable tourist industry. While I was there, I met or saw not a single foreigner. If you like to discover places off the beaten track, Minsk is ideal. Bring a Russian phrase book with you (or put iTranslate on your phone and download the Russian dictionary). Hardly anyone speaks English.

3. It is clean and safe, in fact, the cleanest city I have ever visited. On my walks through the city every day, I looked for but never found a single cigarette butt anywhere. Reason why? Those babushkas you mentioned are armed to the teeth with buckets and mops and keep the streets looking pristine. Yes, it's rather regimented but the results are so welcome and different from the filth and garbage I see on the streets of NYC anytime I'm there.

4. It is fantastically inexpensive. My luxury apartment was very well appointed and cost me around $30 a night. I ate out most evenings and usually paid around $10 for a three-course meal with a glass of excellent Georgian wine. The food is generally very good. Service too. Don’t worry about Chernobyl. That happened a long time ago and the Belarusians carry out stringent tests on local food products.

5. It is 100 percent white. For race realists like us, it is a nice place to be. And you’re right about the women—not as glamorous as the Poles or Hungarians but well dressed, well presented, no purple hair, piercings or tattoos.

Fortunately, I left before the “election” and all the unrest started. I sympathize with the Belarusian people, who are friendly and were willing to chat with me as I am obviously an unthreatening foreigner. The phrase I heard very often was “I love Belarus, I don’t like my government.” Lukashenko is a thug and a crook with little to say in his favor apart from maintaining stability (until recently) and handling the coronavirus problem in an exemplary fashion. Even those who bitterly oppose him admit this. However, I still think he should resign and retire to a dacha somewhere close to his mate Vladimir. We shall see how things work out.

James Fulford writes: A search for Belarusian women, mentioned above, brings up equal parts dating sites, and Belarusian women in the latest protests. The latter look much nicer than the average white female antifa protesters:

My report from the last few days in Minsk.

In 15 years of covering protests & revolutions in various former-Soviet countries I've honestly never seen anything quite like it, both the sinister nature of the repression & the extraordinary public response. https://t.co/mUeoYNByEw