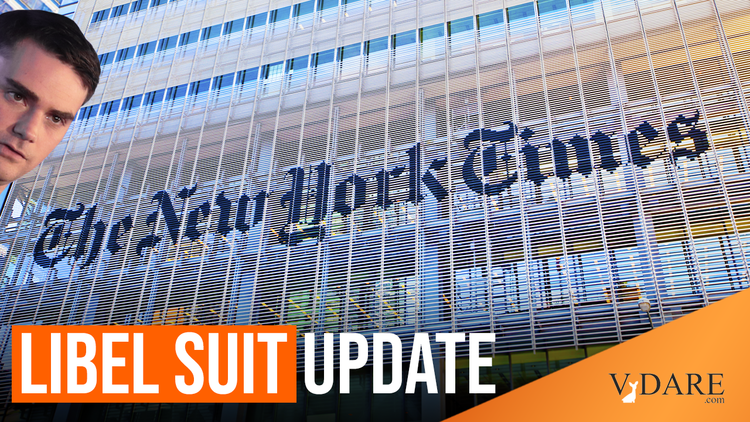 Re: Peter Brimelow's BRIMELOW vs. NEW YORK TIMES: We Respond To Motion To Dismiss—And Find Out The Use Of Ben Shapiro

From: Milkshake Duck [Email him]

As the New York Times noted in its motion to dismiss VDARE's lawsuit, Conservatism Inc. darling Ben Shapiro has accused VDare of being a "white-supremacist site." He does not explain his reasoning for this claim, but I think it can be inferred from a speech he made last year at Stanford in which he claimed that there is no link between race and political preference, that "voters are malleable," and that anyone who thinks otherwise is "identical to the identity politics left."

I remember back in 2014, when he made a video espousing those exact views he now decries as white supremacist. To my surprise, it has not been removed from YouTube.
Caption:  "Establishment Republicans believe that Hispanic immigrants are a natural conservative constituency just an amnesty vote away from joining the GOP. Ben Shapiro takes a look at the polls to disprove this notion" [Ben Shapiro: Amnesty Will Destroy Conservatives, November 4, 2014].