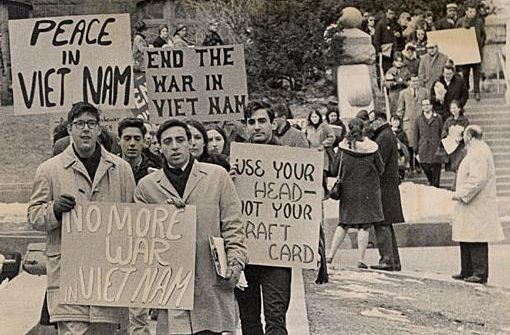 A Reader Defends (Retrospectively) Opposition To The Vietnam War, Even By MLK; Peter Brimelow Comments

An Anonymous Anti-War Reader [Email him]

The plain fact is that King was a Man of the Left and American radicals are quite right to complain that he has been stolen from them. Thus, given that Leftist agitations are much more organized than the MSM cares to report, it might very well turn out that King'?s decision to come out in opposition to the Vietnam War in April 1967 was ultimately at the behest of America?s foreign enemies.

I can tolerate a fair amount of ideological difference, but if you think that opposition to the war in Vietnam was inherently traitorous, you will lose this reader for good.

While I am too young to have any meaningful recollection of the Cold War, I have read about it in more detail than younger people. I do know the USSR was a real existential threat to us (and we to them).

But I don't think the Domino Theory ever had the overwhelming evidence behind it that would allow Brimelow to call a man a traitor for opposing a horrifically bloody war in a small country on the other side of the globe. Even if King was avowedly pro-Communist, opposition to a war of imperialism is never "traitorous."

Peter Brimelow responds: Of course, my point was not that all opposition to the war was traitorous, but that it was coordinated by the Left much more than was reported by the MSM at the time (compare, for example George Soros’s financing of both Ferguson “protests” and the 2006 Los Angeles Amnesty marches) and that if it turns out that MLK came out against the war (which he did quite late) at the behest of Communists, it's going to look very bad.

On my own campus at the University of Sussex, I remember a radical leader quite openly explaining that the timing of one key demonstration was because the North Vietnamese had insisted on it. Of course, this was in the UK and the issue was less sensitive, but the leader was an American—Mike Klein, he probably has tenure somewhere now. (But at least he doesn't have a federal holiday named after him).

Ironically, of the small group of student conservatives I knew who supported the war at the time, many have now concluded it was a mistake. However, I think this is an emotional projection from subsequent U.S. wars, which they tend to oppose for Buchananite reasons. (Buchanan was called a traitor too, of course).

Personally, I still think the Vietnam War was justified and could have been won, like the Malayan  Emergency—and that it was only through the grace of God (and Ronald Reagan) that the U.S subsequently won the Cold War. But I also think that it was a prudential issue and that reasonable men can disagree on it.