The Washington Post has a report that New York University waited months to tell police that a Hispanic student set fire to a bed with a girl in it—and recorded video of it on Snapchat.

The Post report is raceless and says nothing about immigration status, but does mention the assailant's Hispanic name, Jaime Castano, which I also heard in radio reports.

NYU waited months to tell police that a student allegedly set fire to a bed with a girl in it, By Susan Svrluga, January 21, 2015

A New York University student set fire to the bed in his dorm room — where a 19-year-old woman was fast asleep and intoxicated, according to the New York Daily News. The attacker allegedly filmed this all on Snapchat, singing as the flames spread, the newspaper reported.

And university officials waited months before reporting it to police.

John Beckman, a spokesman for NYU, said that the university took the case very seriously from the outset. Once notified a few days after the incident in August, “we rapidly pursued a disciplinary case that promptly led to the expulsion of the defendant.”

Beckman said the university typically gives considerable deference to a victim’s wishes when deciding whether to involve law enforcement. When the student, who suffered burns, asked to talk with police, university officials accompanied her.

The Daily News reported that two months passed before the incident was reported to police. Jaime Castano, the former student accused of setting the fire, was arraigned Tuesday and ordered held on $50,000 bail.

Beckman said, “In retrospect, at least when the facts became clear, this case clearly should have been reported to the police, notwithstanding the reluctance of the victim. We are conducting a full investigation as to how a different decision was made in this case and clarifying our decision-making process so that cases like this are reported to the police immediately in the future.”[More] 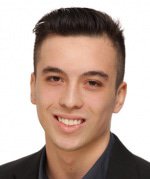 The business of "deference to a victim’s wishes" is wrongheaded in general and particularly here, where the victim's forgiveness will do little good to the next girl set on fire. It's the same kind of thinking that lets universities set up kangaroo courts for sexual assault.

A real estate website did some crafty archive.org research and got a photo and his place of birth.

He's a Colombian white Hispanic , and there's no way of knowing whether he's illegal or not, because the NYPD, the MSM, and now, under Obama, the Department Of Homeland Security, just don't care.

Castano’s broker profile has been deleted from the Citi Habitats website. But an archived page of his agent bio seen by The Real Deal shows that Castano was representing rental properties in Greenwich Village and Chelsea. His biography said he was born in Colombia, raised in Miami, and is a quadruplet. Ex-Citi Habitats broker allegedly set fire to NYU student — and then Snapchatted it

Suspect was singing as he recorded the grisly video, authorities say