A Nebraska Reader Reports US Justice Department Sending A "Mediator" To Address An Outhouse In Norfolk, NE

From Dale Gribble [Email him]

In the Norfolk Nebraska 4th of July parade the honorable mention winners were the "Norfolk Odd Fellows" whose float depicted a zombie like character standing outside an outhouse titled the "Presidential Library". 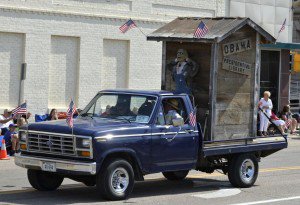 Democrats and coffee house Marxists squealed at the latent racism.  The float designer countered that the float expressed his anger at the Veterans Administration scandal.

The dog whistling was loud enough to catch the attention of the US Justice Department.  Nebraska Watchdog reported that a "mediator" from the Us Justice Department Civil Rights Division visited the Norfolk City Government and after productive meetings the city will organize a multicultural group to discuss racism and getting along.

The White House website claims that civil rights division mediators visit communities to quell racial tension after hate crimes have occurred, such as when a lunatic shot up a Sikh temple a few years ago in Wisconsin.  The Justice Department credits the 1964 civil rights act and the Matthew Shepard and James Byrd, Jr. Hate Crimes Prevention Act of 2009 for establishing and expanding this program.

I could see some role for mediators when real hate crimes occur, say between African American thugs and Asian store owners.

But here all that happened was a float went down the street during the 4th of July that criticized the Administration.

Let’s see if the multicultural focus group somehow gains a veto on parade entries next year.