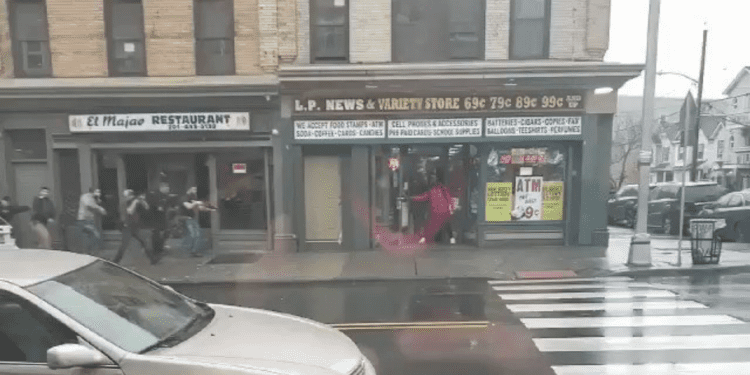 Today’s shooting in Jersey City sent SWAT teams scrambling and left one cop dead and two wounded. One of three suspects was identified as black, but not the other two suspects, one male, one female. But the location is a tip off,  "Martin Luther King Drive ...”

WABC (NY) reported that the incident began at the Bay View Cemetery when at least one shooter opened fire on a police officer, striking them in the shoulder. Other deaths were reported. The shooting was supposedly tied up with a drug deal. For a change the shooters were reported as using rifles, odd if it’s just a bad drug deal. Could be a terrorist connection and an early report says the cops were ambushed.

Jersey has tough gun regulations, but as in other states with similar laws, the perps didn’t feel themselves constrained  by gun laws. I’m sure the press will find some way to blame whitey.

James Fulford writes: When a black Muslim killed a white fellow employee in 2014, I wrote a column headed Alton Nolen Not A Muslim Terrorist, But An American Phenomenon—116 People, Mostly Whites, Have Been Killed By 18 Black “Disgruntled Employees” In The Last 40 Years.

In it, I wrote that

The beheading of a white woman in a Western state by disgruntled African-American employee who had been fired for proselytizing the Muslim religion and for advocating the stoning of women reminds us that not everything is terrorism.

Or to put it another way, in black-on-white crime everything is terrorism.

What I mean by that is that blacks commit anti-white hate crimes on a regular basis for racial reasons...and the media doesn't want to know.