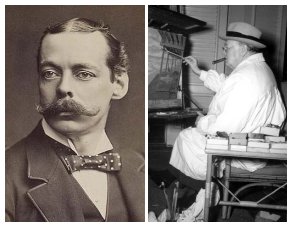 I mentioned my Dad in some recent VDARE piece; and having done so, I recalled a curious little piece Winston Churchill wrote about his Dad.

The piece was written—I know not for whom—in 1947, when Churchill, 73 years old, was out of office and relieving his boredom with painting and fugitive journalism, and with giving the occasional throwaway speech.   I know it from the 1991 The Oxford Book of Essays

edited a bit quirkily (how did Ruskin get left out?) by the late John Gross.  Gross took it from vol. viii of Michael Gilbert's Winston Spencer Churchill, according to his Acknowledgments.

Incredibly, as weird-history blogger "Beachcombing" says, Churchill's piece is nowhere on the internet, when everything else seems to be.  I can't believe copyright is an issue at this distance in time, so I have rectified the absence by scanning in all ten pages of the piece from the Oxford Book.

Here is Winston Churchill in an imagined conversation with his brilliant but tragic father, 52 years after the latter's death.  (Churchill himself, by the way, died 70 years to the exact day after his Dad.)