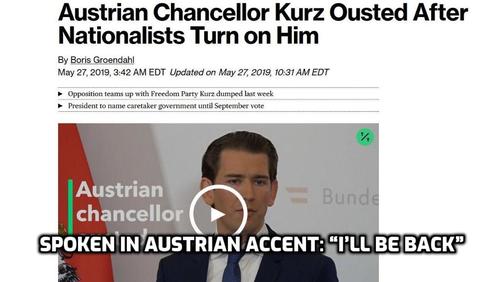 The current chaos in Austria shows that partnership between “center-right” and national conservative parties in Europe has limits. Chancellor Sebastian Kurz’s government, a coalition between Kurz’s Austrian People’s Party and the National Conservative Freedom Party, collapsed after nationalists rebelled against Europe’s “youngest leader”. [Austrian chancellor Kurz outsted after nationalists turn on him, by Boris Groendahl, Bloomberg, May 27, 2019] Of course, Kurz started it by overreacting to a Leftist media hit job on his coalition partners. Now Kurz may find himself out of power for the foreseeable future—or possibly strengthened, depending on how   Austrian elections in September turn out. Either way, European and American patriots should learn the moral: any coalition with the “center-” a.k.a. Respectable Right will likely end in betrayal.

The crisis began with a sophisticated sting operation: Freedom Party leader Hans Christian-Strache’s secretly-filmed honeypot meeting (in 2017!) with the supposed “niece of a Russian oligarch.” They discussed obtaining control of a major newspaper and getting “access” to public contracts. [Austria Vice-Chancellor Heinz-Christian Strache resigns over video scandal involving Russian fixer, Agence France-Presse, South China Morning Post, May 18, 2019] Strache, thinking he was in private, spoke stupidly, but it’s important to note he didn’t actually do anything. He claims it was just a political hit job and also used illegal methods. But he fell on his sword anyway.

It’s unclear who was behind the video. And Main Stream Media journalists/ activists, rejoicing at Strache’s downfall, will probably never investigate. [Austria scandal: Mystery of the honey-trap video, by Bethany Bell, BBC, May 24, 2019]. Theories range from rival Austrian parties to Russian oligarchs themselves, though the man whose name was used, Igor Makarov, says he wants to find out who was behind the “unauthorized use of my name”. [Russian Oligarch Denies Links to Video That Brought Down Austria’s Government, The Moscow Times, May 20, 2019] One former German spy claims it was the Mossad, acting to take out a nationalist party that had supposedly fueled anti-Semitism. The former spy was then himself accused of anti-Semitism. [German Ex-Spy Chief: Mossad Behind Video Leak That Led to Austria Gov’t Collapse, Sputnik, May 28, 2019]

But no matter who was behind the sting, it was essentially a successful version of the American Establishment’s Deep State Coup that has long been underway, and is still underway, against President Donald J. Trump

And whatever the truth, Kurz, out of cowardice, opportunism or both, called for the resignation not just of Strache, but of Interior Minister Herbert Kickl of the Freedom Party.

MSM journalists rejoiced. “When he took power in 2017, Austria’s Sebastian Kurz became the European Union’s youngest head of government,” chortled the Washington Post’s Jonathan Tirone. “Now he’s also the shortest-serving in Austrian history and the first to be thrown out of office since the country was reconstituted after World War II.” [How a Secret Video Felled Austria’s Wunderkind Leader, May 29, 2019] The MSM is also currently congratulating itself that the caretaker Chancellor will be a female. [First female chancellor, Brigitte Bierlein, to head interim government in Austria, Reuters, May 30, 2019]

Kurz is embarrassed, but he may not be really weakened. His party won the recent EU elections. The Freedom Party took a hit, but not as badly as you might expect, losing only a couple points. And amazingly, despite being put in last place on the party list (which means he was practically guaranteed to get no seat) Strache actually won an MEP seat because enough voters declared their personal preference for him, even after the scandal. [Austria’s Strache wins EU Parliament seat despite scandal: reports, by Judith Mischke, Politico, May 27, 2019]

What this means: the Austrian People’s Party is likely to win the next Austrian national elections, but that the Freedom Party is still a factor. Kurz can argue that he was the victim of political intrigue by both the opposition center-left Social Democrats and the “far-right” Freedom Party. [Terminated Sebastian Kurz will be back, by Matthew Karnitschnig, Politico, May 29, 2019] If the EU elections are indication, the strategy will work.

The question: who can Kurz form a partnership with?

Unless he wins an outright majority (unlikely), or can cobble something together with minor parties, he’ll need to go back to either the Social Democrats or the Freedom Party, the two parties that just united to remove him. It’s hard to imagine he’ll turn to the Freedom Party, seeing as how he destroyed his government in order to purge them. If such a government is formed, the two sides would distrust each other so thoroughly it would be hard to see how anything gets done.

More likely, Kurz will try to show he’s more “moderate” and will form a government with the Social Democrats in the minority (unless the center-left somehow gains unprecedented momentum in the next few weeks).

But if he does that, the Freedom Party will likely bounce back more quickly from this scandal, because it will become clear it is the true opposition to the Austrian political class. Indeed, Vox reluctantly admits:

The far right may also play up their victimhood—after all, they were targeted in a sting operation — to regain their previous strength within the next few months

What’s to be learned from all this? To the center-Respectable Right, nationalists are always the real enemy. If they are eliminated, the “center-right” thinks it will become the only game in town.

The same dynamic can be seen in a different way in Germany, where Angela Merkel continuously condemns the “Far-Right” but does nothing about rampaging Leftist mobs. Merkel has ruled out “categorically” any governing coalition with the Alternative for Germany in any area of Germany. [Merkel ‘categorically rules out coalition with far-right AfD, Reuters, September 27, 2018]

But given what’s happening in Austria, that might be a good thing. It enables patriotic Germans to build up their own power base and present a real alternative to the present System.

And, of course, the same pattern is also on display in America, where Conservatism Inc. mostly defends the deplatforming of nationalists and continues to purge anyone who raises hard questions about immigration, race, and the political leanings of the corporate elite. The Trump campaign was supposed to provide an alternative to Conservatism Inc. But following his victory, President Trump rewarded Never Trumpers and Beltway Right bureaucrats with staff positions. Not surprisingly, they keep betraying him.

What’s the alternative? As always, look to Italy and Europe’s most successful party, Matteo Salvini’s Lega. Lega actually ran as part of a conservative coalition during the last national elections. However, after overperforming in the election, Salvini formed a partnership not with Silvio Berlusconi’s Forza Italia, but the populist and idiosyncratic “Five Star Movement.” With no “center-right” to worry about, Salvini has been able to take an aggressive stand on immigration issues and is now overshadowing his populist partners.

Salvini’s party is marching from strength to strength, and won decisively in the most recent EU elections. Meanwhile, the traditional conservative parties are just following in his wake. Forza Italia supporters have been reduced to breathing a sigh of relief that FI did better than expected in EU elections—meaning that Silvio Berlusconi will likely be a junior partner if Matteo Salvini is able to form a new government of the right after Italy’s next national elections in 2023. [The biggest winners and losers in Italy’s EU election results, The Local Italy, May 27, 2019]

The moral of all this: nationalists have to operate as an independent political force--not simply the “more extreme” conservatives. This means having a political program that is truly independent of and in some ways opposed to that of the “center-right.”

Dependence on the center-right guarantees betrayal. The Freedom Party learned this the hard way. Let’s hope they can build enough strength over the next few weeks that Chancellor Kurz will learn he shouldn’t cross them again.