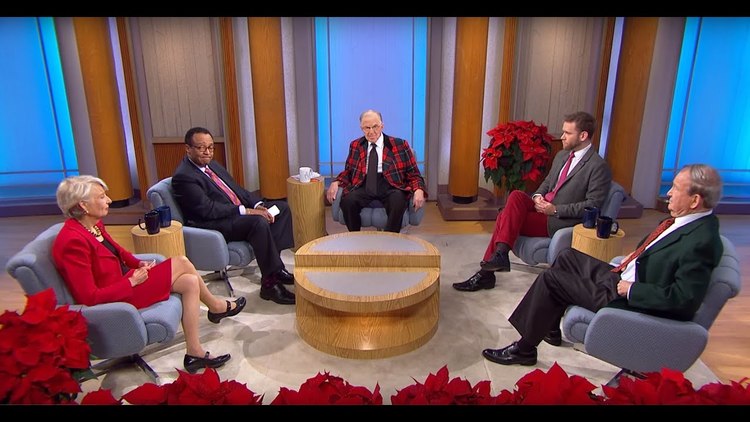 Each year, “The McLaughlin Group,” the longest-running panel show on national TV, which began in 1982, announces its awards for the winners and losers and the best and the worst of the year.

Rereading my list of 39 awardees [Full Transcript] suggests something about how our world is changing.

As “Person of the Year” and “Biggest Winner,” the choice was easy, Donald Trump. American Pharoah, Triple Crown winner of the Kentucky Derby, the Preakness and the Belmont Stakes, was my runner-up.

But three selections tell another side of the story of Trump’s triumph. My “Biggest Loser” was the Republican establishment. As “Most Overrated,” I chose Republican governors as presidential candidates. As “Worst Politician,” I chose Jeb Bush, son and brother of presidents, who began as the GOP front-runner with $100 million in the bank and is now hovering around 3 percent.

In the run up to 2015, the GOP field was dominated by governors and ex-governors: Scott Walker, Jeb Bush, Rick Perry, Chris Christie, John Kasich. It was called “the strongest field since 1980,” when Ronald Reagan, George H. W. Bush, and Bob Dole competed.

And governors, with executive rather than legislative experience, were said to be the ideal choice for chief executive.

Yet, before year’s end, Walker, Perry, and George Pataki were gone and support for Bush, Kasich and Christie together did not come close to that of Trump. Trump’s main rival was Ted Cruz, the scourge of the Republican establishment in the Senate.

Why have Republicans and conservatives rallied to candidates who relish bashing the elites of their own party?

Establishment Republicans have lost what the Chinese used to call the mandate of heaven. Despite their blather, they never secured the border in 25 years. They talk populism at election time but haul water in Washington for corporate America by signing on to trade treaties, like NAFTA, GATT and TPP, that workers detest and that send U.S. jobs overseas and cause U.S. wages to sink.

And they have plunged us into unnecessary wars they knew not how to end or win. The Bush era in the Republican Party is over.

Americans could be at a watershed moment when Sen. Lindsey Graham, an articulate voice for deeper intervention in the Middle East, is forced to drop out with less than 1 percent in the polls.

A second issue that dominated the McLaughlin Group awards was, regrettably, the deepening racial divide.

“The Enough Already Award” I conferred on Black Lives Matter, a movement marked by confrontations, the invasion of stores, hassling of citizens, and blocking of streets to protest what BLM claims is rogue police misconduct against black people.

That was said to be the plea for his life by Michael Brown in Ferguson, Missouri. Only it never happened. It was a lie, a concocted slander against Officer Darren Wilson who shot Brown only after a fight over Wilson’s gun and Brown had charged the cop when told to halt.

My choice for “Most Underreported Story” was “The Ferguson Effect.” This was most prominent in Baltimore, where cops, to avoid charges of racial harassment, stopped doing the preventive police work that produced a near-miraculous reduction in murders and violent crimes since the 1990s.

The “Most Underrated” for me was the revelation that, under Obama, gun sales have doubled to 18 million a year. For 2015, one estimate is 20 million guns sold, and 185,000 on Black Friday alone.

There are more guns now in the USA than there are people.

My choice for “Best Government Dollar Spent” was for first responders, especially the cops who risk their lives.

Taken together, these stories underscore the “Black vs. Blue” conflict in America, where some black folks believe the lives of their young are less valued, while other Americans look on cops as the first line of defense for their families in increasingly dangerous times.

The racial divide we thought had closed has returned to re-poison our politics. And with the crime rate not only higher in the African-American community, but rising, there are inevitably going to be more and more black vs. blue collisions on which Americans take sides.

My choice for “Most Defining Political Moment” — the Paris and San Bernardino massacres — and “Worst Political Theater” — the ISIS beheadings and executions — may also point to what is coming.

From Virginia Tech to Tucson, from Ford Hood to Sandy Hook, from Columbine to Aurora, and from the Washington Navy Yard to Charleston, we have seen the enormous coverage garnered by the premeditated atrocities of our homegrown mass murderers.

Others seeking that same publicity will almost surely follow their example. So, too, the international attention that Charlie Hebdo and San Bernardino reaped will likely prove to be irresistible magnets to new ISIS and al-Qaida suicide bombers and killers.

But, as ever, we shall persevere. Happy New Year!