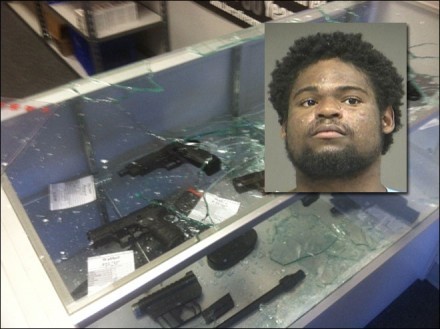 Above is the stock photo of a white man with a baseball bat, from Cracked.com's "Dumb Crook" story about a man who tried to rob a gun store while armed only with a baseball bat. [8 Criminals Who Took Dumbassery to Staggering Heights, By Felix Clay January 18, 2014 ]

Below is the stock graphic used for all Slate.com "Dumb Crook" stories, which is the story Cracked.com is linking to. [Ladies and Gentlemen, This Guy Might Be the Dumbest Dumb Criminal of Them All, By Justin Peters, August 1, 2013]I believe it's supposed to represent a white guy, although with mask and gloves, it's hard to tell. And here is the actual photo of the man who "brought a bat to a gun fight": Derrick Mosley. Guy tries to rob a gun store with a baseball bat, fails miserably

Well how about a bat? Apparently, that doesn't work too well either - just ask 22-year-old Derrick Mosley.

Sheriff's deputies say Mosley walked into Discount Gun Sales on Southwest Beaverton-Hillsdale Highway around 4 p.m. Thursday with a bat in hand and smashed a display case.

But they say when Mosley tried to steal a gun, the store manager simply pulled out his own personal firearm and pointed it straight at the would-be-robber. The manager then yelled some orders at the guy and got him to drop the baseball bat, the gun he had tried to take and a nine-inch long knife he had on him.

When sheriff's deputies arrived, they found Mosley on the floor being held at gunpoint by the manager. They handcuffed Mosley on the spot and took him into custody on charges of first-degree robbery, first-degree theft, unlawful possession of a firearm and second-degree criminal mischief. Bail was set at $250,000.

As Babe Ruth rained down holy hell on a display case of unloaded guns at the store, the shopkeeper, who was packing a fully loaded one, put Mosley in his place in a way only an angry man with a lethal weapon facing down a moron with a stick can. When police arrived, Mosley was face down in some broken glass with a gun pointed at him, because obviously he was.

KATU.com reports that, last week, Mosley allegedly grabbed his trusty baseball bat and decided to go out and rob a store. Unfortunately, the store he allegedly decided to rob was a gun shop. “The guns they sell aren’t loaded,” he might have been thinking, which, while true, fails to account for the likelihood that those who work in gun stores might be gun enthusiasts who like to take their guns to work. And, indeed, when Mosley allegedly barged into Discount Gun Sales and smashed a display counter with his baseball bat, “the store manager simply pulled out his own personal firearm and pointed it straight at the would-be-robber.”

As everyone who’s ever played rock-gun-baseball bat knows, gun always beats baseball bat. When the cops came, Mosley was on the floor, being held at gunpoint, presumably covered in glass fragments and shame.

All of which is loads of fun if we're talking about the guy at the top—but we're not, we're talking about Derrick Mosley, a black criminal who may actually have a low IQ. These guys are being racist, and either they don't know it, or they're concealing it.

In recent months every “Dumb Criminal of the Week” column has been accompanied by a drawing [See above] of a confused thief who cannot find the eye holes in his ski mask—a quintessential “dumb criminal” mistake. Well, going forward, I will lobby to replace that drawing with a mugshot of Derrick Mosley, an Oregon man who may well be the dumbest of all the dumb criminals I’ve profiled thus far.

So far he hasn't.

P.S. If you're in the Beaverton area, support Discount Gun Sales! They've got loads of good stuff.