The Main Stream Media predicts Donald J. Trump will appeal for “national unity” in his Inaugural Address this Friday, but they’ve been mistaken before. One way he could wrong-foot the Narrative: by announcing an immediate pause in “refugee” admissions, currently surging, to be followed by a zero quota for the next fiscal year—something that, by a legal quirk, he has absolute authority to do. There would be hysteria, in which the major Jewish organizations would, almost certainly, join. My question: why would they do that? 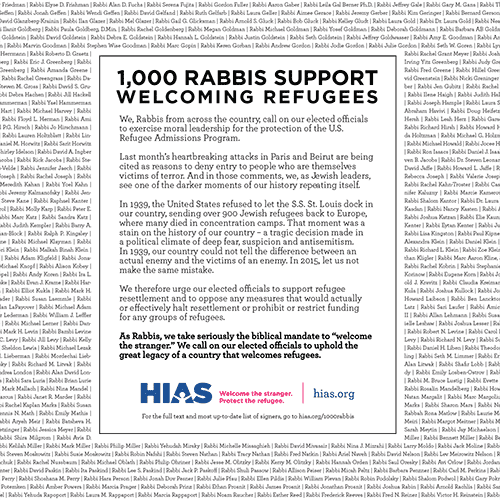 The major Jewish organizations have certainly been in the forefront welcoming Syrian refugees [For Jewish Groups, Syrian Refugees are a Reminder, Not a Threat By Ron Kampeas, JTA.org, November 24, 2015; As Anti-Refugee Sentiment Builds, Jewish Agencies Push for Settlement, Greg Salisbury, JewishExponent.com, November 25, 2015]. This seems bizarre, given the well-known anti-Jewish, anti-Israel sentiments common among Muslims.

The Jewish leaders’ own rationales—which we should take seriously—generally derive from how they view the past. And it’s the fact that Jews were sometimes denied the ability to flee Hitler's Germany.

But in privileging their own perceived interests, the Jewish organizations obviously are not taking into account the legitimate concerns of Americans about refugee resettlement’s impact on terrorism, social cohesion, unemployment, crime, and welfare costs—not to mention the ethnic genetic interests of whites. The entire issue is seen through the lens of Jewish memories. There is no attempt to make a case that admitting “refugees” will actually benefit America— the vast majority are uneducated and cannot be expected to contribute to a First World economy. [An ill wind, The Economist, January 23, 2016,]

Moreover, even granting that denying refuge to Jews in the 1930s was indefensible (and I don’t agree) there are solutions to the refugee problem that would not mean more unassimilable, non-White immigrants. Thus Trump has already proposed providing a Mid-East safe zone.

But why are Jewish organizations so sanguine about immigrants who harbor anti-Jewish, anti-Israeli attitudes?

Rather we must seek an answer in terms of Jewish perceptions of their self-interest.

But for an evolutionary psychologist, this immediately presents a problem. There are several mechanisms implicated in the evolved psychological basis of ethnic conflict, But the most relevant: people have negative stereotypes of outgroups, and to discriminate against them. So why would Jews promote admitting people into Western countries even though they (like everyone else) are inclined to see the migrants negatively? 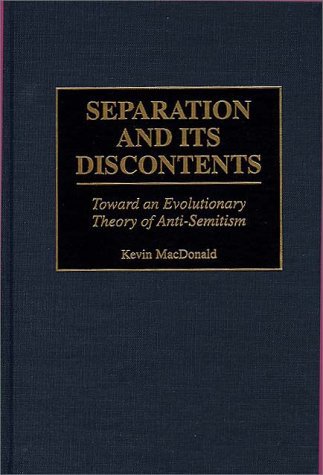 For Jews living in Western societies, however, the migrants aren’t the only outgroup. Western peoples and cultures themselves are an outgroup— see my book Separation and Its Discontents. Hence one would expect Jewish negative attitudes toward both immigrants and the host white culture.

Still, humans have rational thought processes that process culturally-available information and can suppress negative attitudes toward outgroups, while inducing empathy and guilt. In my view, these processes are central to understanding why so many Europeans wholeheartedly welcome refugees—after reading empathy-inducing accounts of suffering women and children in the Main Stream Media, and after being exposed to guilt-inducing education.

(And, of course, the anti-White revolution is nothing if not massively incentivized.)

But what rational calculations might lead Jewish organizations to promote the refugee invasion of Europe?

As reflected in their statements, first and foremost is the perception that racially-conscious, racially-homogeneous Germany turned against Jews during the National Socialist period; and that other European and European-derived countries (such as the U.S.) failed eagerly to accept Jewish refugees.

Moreover, Jewish intellectual movements—prototypically, the Frankfurt School—have successfully portrayed ethnocentrism among Europeans as pathological—hence talk about the “virus” of anti-Semitism. Fear and loathing of White, Christian America runs deep. It is seen as a far greater threat than importing a substantial but relatively small community of Muslims, even if they are prone to terrorism and anti-Jewish attitudes.

Terrorism, after all is a strategy pursued by non-elite groups. An elite group like American Jews pursue their interests in the MSM, the legislative process, and the judicial system—top-down influence that is far more compatible with oligarchy than democracy. (An oligarchic model fits U.S. politics much better than a democratic model—see Martin Gilens and Benjamin Page in Perspectives on Politics, September 2014, Testing Theories of American Politics: Elites, Interest Groups, and Average Citizens).

Muslim immigrants, given their proneness to street crime and low academic achievement, are no threat to the elite status of Jews. Nor are they a threat to the current oligarchical power structure of Western societies, an unholy alliance between large donors, politicians, and MSM and academia elites.

Moreover, the idea of any limitation on immigration to the West by a particular racial/ethnic or religious group is completely at odds with the ideology of multiculturalism and diversity, the “we’re all the same” mantra, and the ideology that Western countries are “proposition nations” committed only to abstract ideas like “freedom” and “democracy,” with no ethnic or religious content. And this ideology has been promoted by Jewish intellectual movements at least since World War II—a theme of The Culture of Critique. It has been internalized across the elite spectrum—by Republicans and Democrats, Jews and non-Jews alike

Commitment to immigration and multiculturalism is thus a central aspect of Jewish self-identity. It would be something like getting the Jewish community to turn its back on Zionism if it became politically costly as a result of pro-Palestinian activism. Not going to happen.

The late Lawrence Auster, a Jewish convert to Christianity, framed Jewish attitudes in terms of a “slippery slope” argument:

Now when Jews put together the idea that “any social prejudice or exclusion directed against Jews leads potentially to Auschwitz” with the idea that “all bigotry is indivisible,” they must reach the conclusion that any exclusion of any group, no matter how alien it may be to the host society, is a potential Auschwitz.

So there it is. We have identified the core Jewish conviction that makes Jews keep pushing relentlessly for mass immigration, even the mass immigration of their deadliest enemies. In the thought-process of Jews, to keep Jew-hating Muslims out of America would feed exclusionary attitudes among America’s white Gentile majority that could result in another Jewish Holocaust. Why Jews welcome Muslims  The View from the Right, December 9, 2002.

Moreover, Jewish organizations have combined advocating high levels of immigration with simultaneously advocating intensification of police-state-type controls to ensure Jewish security. For example, in Germany even before the refugee influx, synagogues, Jewish schools and other organizations have been under constant police protection. [Migrant Influx In Germany Raises Fears Of Anti-Semitism, By Alison Smale, NYT, January 26, 2016]

Thus, for Jewish organizations, an obvious upside of refugee crime is that it provide a rationale for policies that have long been advocated by many in the Jewish community—especially curbs on free speech, and in particular speech related to ethnicity and immigration. It is no accident that, for example, in Germany, the migrant crisis has led to a campaign to shut down Facebook criticism of the invasion—with the full cooperation of fanatical immigration enthusiast Mark Zuckerberg.

As a result, the consensus view among Jews seems to be that the transformation of the West is manageable. And if some non-elite Jews, like the upward of 9,000 who left France in 2015 [French immigration to Israel surges in summer of 2015, YNet News, June 17, 2015], emigrate to Israel because of Muslim street-level hostility, this will not impact the Jewish elites.

The only real cloud on the horizon: the possibility that Leftist political parties, powered by non-Whites and White Social Justice Warriors, will become hostile toward Israel. Thus Muslims in the UK typically end up making alliances with White Leftists critical of Israel. The Labour Party is now dependent on MSM power, Muslim votes and Jewish donors—but Jewish money has been deserting as Labour takes an ever more critical view of Israel.

The same process is brewing in the US but will take a while longer. An important harbinger: President Obama’s abstention for the UN Security Council resolution condemning the West Bank settlements. Another: the fact that Rep. Keith Ellison, who has called Israel an “apartheid state,” is a candidate for chair of the Democratic National Committee.

Anti-Israel attitudes are quite common in the Democratic Party— a recent Pew Poll of Democrats found a near-even split, 33% favoring Israel, 31% favoring the Palestinians. This has led to considerable angst among pro-Israel pundits like James Kirchick. [A Warning to Jewish Democrats: The Time to Fight for Your Party Is Now, by James Kirkchick, The Tablet, January 9, 2017]

If the UK is any indication, the Jewish donor base that is so critical for the Democrats will bail if the Democrats adopt anti-Israel positions. One can even imagine that in the future Jews will be far more likely to vote Republican.

In fact, one might speculate that Trump’s strongly pro-Israel stance is an attempt recruit Jewish support for his other policies, such as a ban on immigration of Muslims—much like Geert Wilders, who, like Trump, has called for restrictions on Muslim immigration while also being very pro-Israel.

I doubt this will succeed, but the logic is certainly there.

Notice that such a shift in Jewish attitudes on immigration would not be the result of low-level street crime and occasional acts of terrorism, but because of a possible loss of political control—because Muslim votes are having an effect on nationwide policy that affects Jewish interests.

To the Jewish Establishment, that is indeed very worrying.

Kevin MacDonald [email him] is emeritus professor of psychology at California State University–Long Beach. His research has focused on developing evolutionary perspectives in developmental psychology, personality theory, Western culture, and ethnic relations (group evolutionary strategies). He edits and is a frequent contributor to The Occidental Observer and The Occidental Quarterly. For his website, click here.