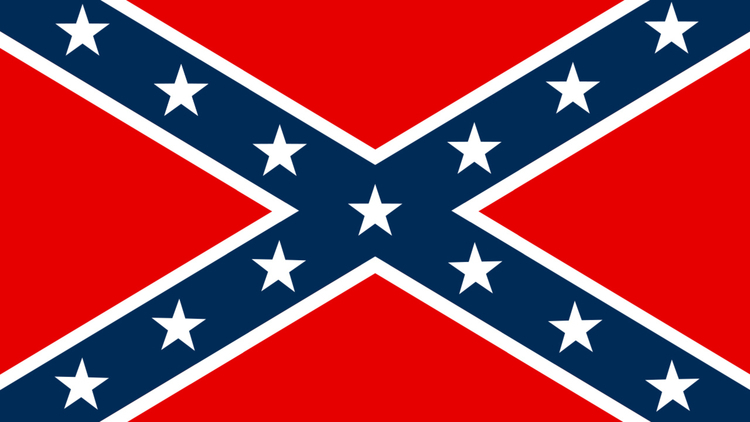 Time To Hang My Confederate Flag

It was many moons ago, at an exit off I-40 between Jackson TN and Memphis, TN, and I had stopped to buy something to drink at the only store for miles around.

As it turned out, the store specialized in Confederate memorabilia. I swear, you could find the Rebel Flag emblazoned on everything from thongs to bongs.

I bought a Coke and a large Confederate flag.

Although the MSM would have you believe otherwise, my flag does not compel me to run out and commit hate crimes—it does not create in me some crazy desire to enslave or lynch Black people.

I bought this flag for two relatively simple reasons:

Here's the best part: the store was managed by two extremely amusing black people who loved their Southern heritage.

This is what has happened since:

A couple weeks ago, I wrote about two boys in Missouri who were suspended from school after unfurling a Confederate flag at a multicultural (gag) assembly.

The response from our readers was overwhelming—and overwhelmingly outrage at this PC atrocity.

So I looked into the issue a bit further and found a story of two girls at a school in Texas who met a similar fate over their handbags.

The girls carried "rebel purses" to school which had the rebel flag (the Battle Flag of the Armies of Northern Virginia) painted on one side.

Rather than surrender their apparently offensive handbags to the principal, the girls agreed to leave the school for the day.

They also refused to stop carrying their "rebel purses" and the school continues to send them home—their parents are fighting the district as we speak. [Girls to fight ban on rebel-flag purses, by Jim Douglas, WFAA-TV, January 7, 2006]

Then I saw an article written by somebody called Tim Wise for Counterpunch called Racism, Neo-Confederacy and the Raising of Historical Illiterates [February 3, 2006.]

First of all, do you think Tim Wise could have fit more liberal buzz words into that title if he tried?

The only one missing is "white supremacy." But not to worry, that one gets ample playing time in the actual article.

Wise addressed the flag fracas down in Texas and the student revolt that ensued following the girls' dismissal from school.

"[the students responded] by plastering 'censored' signs over their purses (be they rebel or not) and book bags, all the while caring quite little as to how the whole thing might feel for the statistical handful of blacks in the school."

The supposed feelings of Black students are more important than the constitutionally protected freedoms of everybody else.

White people may only celebrate history that is acceptable to other races.

In contrast, non-white races may take pride in and celebrate the history of anything they want.

It's actually worse than that.

Once-upon-a-time during a dinner discussion (at a political function no less, because I'm such a genius) I said Nelson Mandela may have done well for South Africa but that did not change the fact that he was also basically, a murderer.

I barely made it out of there alive—I broke the rules, you see.

Black history (any non-white actually) is not to be questioned or criticized.  And should you deign to call it "offensive," you will undoubtedly walk away from the fray with a special parting gift:

The label of racist.

After reading his column and glancing at some of his books, I decided that Tim Wise is one of the few people I would call an expert.

He's an expert on White Liberal Guilt…in fact he might be the Grand Poobah of the Lodge.

"Wise is the author of White Like Me: Reflections on Race from a Privileged Son, NY: Soft Skull Press (2005); and Affirmative Action: Racial Preference in Black and White, NY: Routledge (2005)."

In his anti-Confederate article, Wise wrote:

"But what, other than wallowing, and most certainly pitiable, can we call those who insist on waving the standard of a defeated government, some one hundred and forty one years after it fell?"

What indeed should we call them?

"But what, other than wallowing and most certainly pitiable, can we call those who insist" on elevating the worth of one ethnic heritage above another—by censoring that which is displeasing to the liberal elite?

(Then again, after glancing at the content of Mr. Wise's books I am not sure why they are not all titled: Why I Hate My Race by Tim Wise.)

Those who hate the Civil War claim that it was about slavery because they have to…how else can they justify more than a century's worth of guilt and compensation?

More soldiers died at the Battle of Gettysburg alone than during the Revolutionary War, the War of 1812, the Mexican War and the Spanish-American War combined.

This was a war that saw a man killing his own brother…literally.

This was a war that saw our nation split in half—12 states (arguably 13) seceded from the Union.

Maybe we have become desensitized to the magnitude of such an occurrence. But a lot of Americans at the time were angry enough to take up arms against the federal government.

My Lord, are we to believe that all of this was because of slavery…just slavery?

Are we to believe that man was willing to kill his neighbor, his fellow countryman and indeed, his own brother just to preserve the slave labor on his plantation?

That is beyond ridiculous and I refuse to believe that even the liberal elite (Tim Wise) really believe it.

I don't care what started the Civil War…I don't care if Lincoln just lost a bet with Davis and the bullets started flying.

We should accept American history for exactly what it is…not what we think it should have been or what we need it to be.

The Civil War and the Confederate  Battle Flag should not be reduced to a symbol so that professional guilt-mongers can point and say "see…see, racism is alive and well so let's throw more money at the phony idea of social equality."

Hmm…people like Tim Wise (email him) should be careful.

If they succeed in removing Confederate symbols from society, what would they left to complain about?