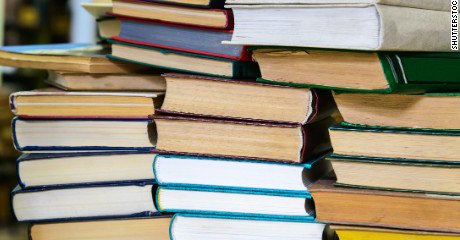 Two Moms, One White, One Black, In "Textbook" Examples Of Black Privilege And Christophobia

A "textbook" example of black privilege, in two complaints about schoolbooks. The first is from a black woman whose black son sent her a picture of a caption from a history of immigration that referred to black slaves as "workers."

McGraw-Hill to Rewrite Textbook After Mom’s Complaint https://t.co/YQ8AaeqIRX via @YahooParenting Parents must be conscious too!

I picked this Tweet because it has a picture of the complaining lady, who is black. Most tweets used the pictures of the books at the head of this page.

Here's the offending caption and the message: 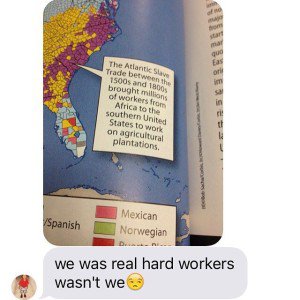 It's obvious that one stream of migration to America was the involuntary migration involved in the Atlantic Slave trade, and the people who imported slaves did so because they wanted them to work.

Dean-Burren shared the text message on Facebook Wednesday, noting “The Atlantic slave trade brought millions of workers…notice the nuanced language there. Workers implies wages…yes?” The photo has more than 1,300 likes and more than 3,700 shares on Facebook.

On Thursday, Dean-Burren posted a video showing the textbook pages, highlighting a section that describes English and European people who came to the U.S. to work as indentured servants, explaining that they worked “for little or no pay.” Dean-Burren continues, “They say that about English and European people, but there is no mention of Africans working as slaves or being slaves. It just says we were workers.”

Most people know that "slave" means you work without pay—few people have any idea what "indentured" means.(Or that white people were ever enslaved in the Colonies.) There are obvious parallels  between modern day illegal  immigrant labor and the cheap labor enthusiasm of the 18th century slave importers, as there are between  the old indentured servitude and modern H-1B visas, but never mind that.

Publisher McGraw-Hill has, of course, crawled, and promised to change the language.

Then here's this, which represents an entirely different attitude towards textbook challenging:

An objection from a white, Christian woman in Florida gets this reaction from "The Frisky":

Meet Christian Kayla Normandin. She’s from Florida, and she is quite upset about some things in her son’s World History textbook. Mainly the part about it being World History, from what I can gather, rather than “History Of The Parts Of The World Christian Kayla Normandin Is OK With Her Kid Learning About.” So she posted a 15-minute rambling, tearful analysis of her various problems with the book.

Her primary issue is that she does not like the fact that the chapter on the Middle East keeps mentioning “Ay-Rab” people and Muslims for some reason. And it’s 40 pages long! And in a textbook!

Chief among Normandin’s complaints is that the book, shockingly, portrays The Crusades as a less than pleasant time and maybe not the best idea anyone ever had. She wonders why they can’t say something nice about the Crusaders! Or just not mention things like killing Jewish people in Europe during that time! Why can’t they look on the bright side of the Crusades!

Now, I swear to god, I didn’t know anyone was out there defending the Crusades. I honestly didn’t. I kind of figured that everyone, collectively, agreed that was just a bad time altogether. I just thought maybe this lady got her Monty Python movies mixed up. But nope! I googled, and apparently some people defend The Crusades now. Also, surprisingly, The Spanish Inquisition. Which, truly, I did not expect.

Because you truly, truly, never gave it any thought? The Crusades and the Inquisition were both reactions to the Muslim conquest and occupation of large parts of the Christian world.

Perhaps if you're a millennial, it would help if you thought of the Muslims from 7th to about the 18th centuries as Nazis, not only because they were anti-Semitic, but because they like to invade other peoples' countries, occupy them, and enslave the inhabitants.

Large parts of Spain were occupied by Muslims until 1492, and the Inquisition was part of the cleanup of Muslims and Muslim sympathizers afterward. For the other side of the story, see The Black Legend, by Eleonore Villarrubia, Catholicism.org, October 24, 2011. Again, for the idiot millennials, I would suggest comparing this to de-Nazification efforts after the Second World War.

As for the crusades, what most people don't realize was that at the time Islam arose in the Middle East, Jerusalem was a Christian city, under the Byzantine Empire. Muslims conquered and occupied it, and wouldn't let Christians so much as visit. That's what the Crusades were about.

See Abolishing America (contd.): The Crusade Against The Crusades by Sam Francis on VDARE.com, and “Ville Gagnée!”–The Crusaders Were Our Kin by John Derbyshire.

But all that is unimportant—the point is that while publishers spring into action if they have actually offended hypersensitive blacks, the media will openly mock Christians who object to what amount to blood libels against their religion.  That's why my article on Christophobia was headed “Christophobia”—The Prejudice That Barely Has A Name.