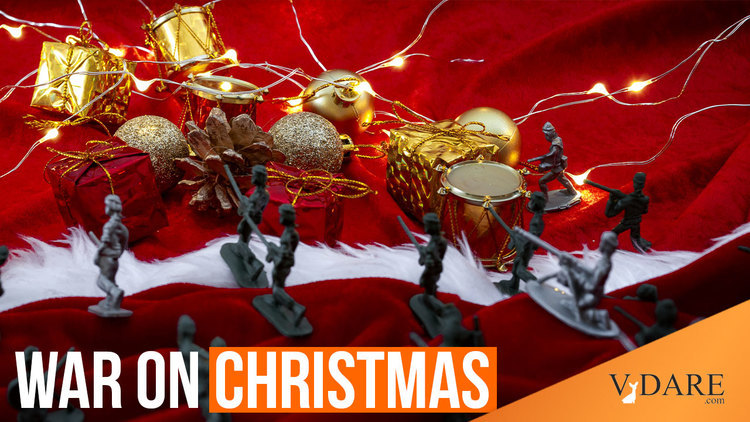 War Against Christmas 2013 | POLITICO’s Daniel Danvir Cranks It Up With “War On Christmas Denial Denial”—Smears VDARE.com With Guilt By Association

A Short History of the War on Christmas

How everyone from Bill O’Reilly to Jon Stewart became a co-conspirator in an annual farce.

Denvir [Twitter] starts with Guilt By Association. Now, I’m actually in favor of guilt by association. You know the people in the 50s, investigated by Joseph McCarthy or HUAC, who were members of a zillion Communist fronts? They were guilty.

However, neither VDARE.com Editor Peter Brimelow nor I are associated in any way with Henry Ford, automotive industrialist and “author”(he used a ghostwriter) of a book called The International Jew, nor with the 1950- era John Birch Society—two early examples of people objecting to the War On Christmas that Denvir adduces.

This kind of thing is common on the Left—Guilt By Association with no association. In Brimelow’s  Alien Nation, you can read about a Raoul Lowery Contreras attack on a George Will column [A 'Nation of Immigrants' no More, July 29, 1993] which had quoted Peter Brimelow to the effect that supporters of current immigration policy “must explain why they wish to transform the American nation as it had evolved by 1965''.

Contreras said that the American of 1965 had “needed to be transformed and that's exactly what's happening, Brimelow, Will and Metzger notwithstanding.”[Racists Wish to Turn America as It Had Evolved in 1965 [sic] El Hispano (Sacramento), August 11, 1993].

"Tom Metzger is the leader of the neo-Nazi White Aryan Resistance. In a 1990 case, he was held liable for civil damages on the theory that his views had inspired three of his followers to murder an Ethiopian immigrant. Contreras seems to have thrown him in to keep us company.”

Metzger is in no way associated with Will or Peter Brimelow. Contreras decided that what Brimelow said was racist, Will, in quoting him was racist, therefore: Nazi!

Denvir thinks Bill O’Reilly is anti-Semitic, and his opposition to the War on Christmas is nuts, therefore: Henry Ford/John Birch/Whatever!

Denvir doesn’t link directly to the sources of the Henry Ford quotes or the Birch Society pamphlet. He scalped it from earlier an earlier War On Christmas denial piece by Michelle Goldberg from Salon Magazine:

The right-wing crusade against the liberal "war on Christmas" is great for rallying the troops. Too bad the war doesn't exist.

As Tom Piatak wrote at the time:  Yes, Virginia (And Michelle Goldberg), There Is A War Against Christmas.

This was an early case of War On Christmas Denial (Stage 4 in Peter Brimelow’s Eight Stages Of Christophobia). But, as with Denvir’s piece now, Goldberg herself actually linked back to actual examples of the War on Christmas, going back years and years.

Denvir gives another horrible example of the tainted sources of the War on Christmas resistance—us here at VDARE.com:

Brimelow—the founder of a popular conservative and frequently white nationalist blog called VDARE—is an expert in such matters. He is credited, and credits himself, for inventing the War on Christmas in the late 1990s, well before O’Reilly. “I just got real interested in the issue,” Brimelow told the Daily Beast in 2008, “because I noticed over the years there was this social shift taking place where people no longer said ‘Merry Christmas.’”

Brimelow is a close student of social shifts, particularly when they are related to skin color or national origin. “The root cause in all cases is the same: an American elite which is increasingly divergent, culturally and even ethnically, from the rest of the country,” Brimelow wrote, referring to what he calls the “Minority Occupied Government.”[Links in original]

That’s on page 2 of the Denvir piece. But page 1 features this direct quotation from Jon Stewart:

So Brimelow may have something there. (Watch the 2012 segment here and judge for yourself.)

Thus Denvir (no doubt inadvertently) shows that there has been a War On Christmas for years, and that people like Stewart have been engaging in War On Christmas denial and Christophobic mockery and demonization for years. What’s next?

The Christmas War is symbiotic, producing a wholesome effect on ratings and web traffic alike: Liberals mock conservatives, and conservatives then hold up the liberal ridicule—be it Stewart or columnist Gail Collins (whom O’Reilly recently dismissed as “this woman in the New York Times ... I forget her name")—as proof of War on Christmas “denial.”

But, as it happens, Daniel Denvir is a professional denier. He’s denied flash mobs, Obama’s failure to enforce the immigration laws, the crimes of Jose Antonio Vargas, black crime in Philadelphia, and Muslim anti-Semitism in Dearborn.

This last column—attacking blogger Debbie Shlussel for finding Muslim anti-Semitism in Dearborn—is pretty funny, since dead white male Henry Ford published his anti-Semitic book in the Dearborn Independent, which he owned, but was forced to close because of lawsuits.

You can still get anti-Semitic books in Dearborn—but you have to go to a mosque.

However, Dearborn is even more notable for Christophobia, so perhaps it’s all right with Denvir.

Denvir  claims Bill O’Reilly may be using “code words.” But his POLITICO article is filled with uncoded contempt for ordinary Americans—“paranoid angst”, ”ignorant and provincial hicks”, “a Bible-believing (often white and English-speaking) America”—that it would get him fired or even arrested if he was talking about Muslim immigrants instead of Americans.

It’s one more case of Patrick Cleburne’s  2006 question: If there's no War on Christmas, how come they deployed an Army?