VDARE.com Halloween I: THE SACRED FURY And The Democracy Of The Dead

See earlier: Review By John Derbyshire! To celebrate Halloween, we are selling The Sacred Fury for a limited time. Order here by November 3rd!

Halloween is the most conservative of holidays. It’s a time when the veil between the worlds is most thin. Horror fiction is an inherently conservative genre. It presupposes an objective moral order of good and evil. As Jake Bowyer just pointed out, it’s not a coincidence that Russell Kirk, perhaps the most important intellectual of the modern American conservative movement, also wrote ghost stories [The ghosts of Russell Kirk, by James Panero, The New Criterion, January 2019]. Ghosts haunting specific locations are a reminder that, in William Faulkner’s words: “The past is never dead. It’s not even past” [Famed quotation isn’t dead – and could even prove costly, by Todd Leopold, CNN, November 11, 2012]. It all links us to our past and forces us to consider concepts like tradition, history, and death that modernity tells us are irrelevant—along with the nation-state. 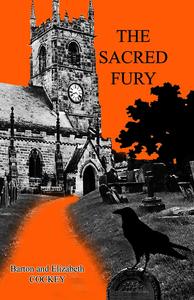 For these reasons, I found it a real pleasure to discuss the novel The Sacred Fury with its authors, Dr. Barton Cockey and his wife Elizabeth. Set in Baltimore, unquestionably the most Gothic of America’s cities and the home of Edgar Allan Poe, the plot revolves around an organization that is manipulating America from the top down. I won’t provide spoilers, but readers will unquestionably be able to note the parallels between this fictitious organization and some of the groups out there waging a “Color Revolution” against Historic American Nation.

The city of Baltimore itself serves as kind of a character in its own right, a reminder that we are tied to a particular place and history, not simply deracinated individuals in a modernist moral order devoid of meaning, identity, and purpose. (It’s for that reason that I favored our purchase of the VDARE Castle so strongly—not just because of its practical applications, but because of what it symbolized.)

Today, fiction is one of the few ways to get important metapolitical and cultural messages across. Explicit political analysis is often taboo. Effectively, America is no longer a free country. In a climate like this, art becomes even more important, especially art that makes people think about their identity.

Additionally, simply the existence of books like The Sacred Fury sends a message to those who would claim to rule us. We are not simply pawns to be moved about on the chessboard of the global economy. We have inherent worth behind our economic value and we are tied to things that can’t simply be labeled with a price tag. We have an identity and a purpose that can’t be subverted by NGOs, the Main Stream Media, or the hysterical Narratives that try to frighten people into moral surrender to a hostile elite.

The Sacred Fury thus has a purpose beyond just its literary and entertainment value. I hope you all enjoy this interview, this book, and Halloween – our seasonal reminder that we are part of something bigger than ourselves.

To borrow from G.K. Cheston: “Tradition means giving a vote to the most obscure of all classes, our ancestors. It is the democracy of the dead.”