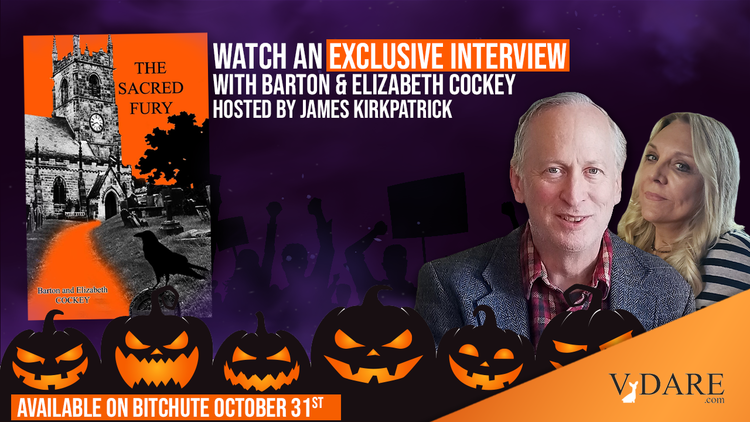 Halloween Stream 2020 With Authors Of THE SACRED FURY! [See Review By John Derbyshire]

The VDARE.com Book Club presents... Halloween Stream 2020 with Dr. Barton Cockey and Elizabeth Cockey, authors of The Sacred Fury, a politically refreshing supernatural novel set in a dystopian future bearing a disconcerting resemblence to our present. (The Sacred Fury is available for a limited time at VDARE.com here!)

Unlike former exclusive podcasts, this edition will be publicly available! Readers are encouraged to send in their questions for the authors to assistant@vdare.com.

Current fiction lists are not, to put it very mildly indeed, over-burdened with novels taking a disrespectfully satirical view of the West's current ideological Narrative — all the idiot cant of "privilege," "oppression," "triggering," "hate," "Nazis," and so on.

Barton and Elizabeth Cockey's The Sacred Fury takes just such a view. One of the principals, a college teacher of English, is suspended from her job for telling her students to discriminate between facts and opinions. Discriminate — eeeek! (I would not be the least bit surprised to learn that this incident is taken from life.)

Elsewhere in town — the town is actually present-day Baltimore — a statue of Babe Ruth has been vandalized as representative of "a white man's sport." In reaction, defenders of the statue "amazingly had managed to obtain a permit to hold a vigil on Opening Day [i.e. at the ball park] with prayers and speeches." This demonstration ends with violence:

"A large number of policemen were standing by with shields, channeling the demonstrators into a column of twos, through a gauntlet of what later news reports would describe as counter-protestors … Curiously, the riot police did not arrest a single counter-protestor."

Bring anything to mind? Those counter-protestors are in the service of an organization called Global Outreach Organizing for Diversity (G.O.O.D.), the brainchild of "megalomaniac currency speculator and destroyer of economies" Klaus Pyknos. The Cockeys' fictional world is not very distant from our own.

All this politically-incorrect fun is in service of a mystery-supernatural tale centered on Edgar Allan Poe, who died in Baltimore in 1849 and is buried there. The circumstances leading up to Poe's death are a real mystery, so there is plenty for the authors to play with here.

And that mystery-supernatural tale, which carries the main narrative thread of the story, rests on a just-visible metaphysical theme about the conquest of death, a theme that Poe himself touched on in his deeply weird 1848 "prose poem" Eureka, and that is also of compelling interest to Klaus Pyknos.

To describe the story any further would give too much away. Try The Sacred Fury for yourself.