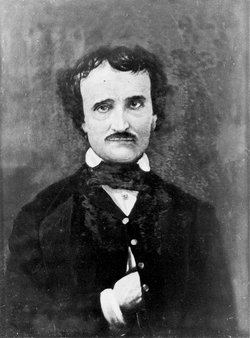 Marilynne Robinson writes in the New York Review of Books:

Poe’s mind was by no means commonplace. In the last year of his life [1848] he wrote a prose poem, Eureka, which would have established this fact beyond doubt—if it had not been so full of intuitive insight that neither his contemporaries nor subsequent generations, at least until the late twentieth century, could make any sense of it. Its very brilliance made it an object of ridicule, an instance of affectation and delusion, and so it is regarded to this day among readers and critics who are not at all abreast of contemporary physics. Eureka describes the origins of the universe in a single particle, from which “radiated” the atoms of which all matter is made. Minute dissimilarities of size and distribution among these atoms meant that the effects of gravity caused them to accumulate as matter, forming the physical universe.

This by itself would be a startling anticipation of modern cosmology, if Poe had not also drawn striking conclusions from it, for example that space and “duration” are one thing, that there might be stars that emit no light, that there is a repulsive force that in some degree counteracts the force of gravity, that there could be any number of universes with different laws simultaneous with ours, that our universe might collapse to its original state and another universe erupt from the particle it would have become, that our present universe may be one in a series.

All this is perfectly sound as observation, hypothesis, or speculation by the lights of science in the twenty-?rst century. And of course Poe had neither evidence nor authority for any of it. It was the product, he said, of a kind of aesthetic reasoning—therefore, he insisted, a poem. He was absolutely sincere about the truth of the account he had made of cosmic origins, and he was ridiculed for his sincerity. Eureka is important because it indicates the scale and the seriousness of Poe’s thinking, and its remarkable integrity. It demonstrates his use of his aesthetic sense as a particularly rigorous method of inquiry.

Edgar Allan Poe is one of the few writers who had a larger influence outside his own language. The French, such as Baudelaire, were amazed by Poe, but Anglo-Americans have tended to sniff at him as a genre writer.

Poe has a reasonable claim to be the father of modern detective fiction, and played sizable roles in horror fiction and science fiction. (In Poe’s day, the line between hoaxes and science fiction wasn’t clear. A New York newspaper editor had ripped off Poe’s story about a trip to the Moon by publishing it as news and then later admitting it was a hoax. So Poe later wrote an 1844 hoax that appeared in the editor’s newspaper as news about a Graf Zeppelin-like balloon trip across the Atlantic in three days.)

On the other hand, maybe genre fiction is the great literary achievement of the last couple hundred years or so?

For example, it’s pretty cool that most big cities in America these days have their own crime fiction writer, typically a former local newspaper reporter. Awhile ago I asked if any writers or movies had yet touched upon the mortgage meltdown, and a commenter suggested Michael Connelly’s 2011 Lincoln Lawyer novel The Fifth Witness.

It turns out that the entire story takes place within a half-dozen miles of my house, with numerous scenes set at restaurants I’ve eaten at (e.g., the Hamburger Hamlet in Sherman Oaks). And the big trial is set at the Van Nuys courthouse where I’ve done jury duty. A key character is a (highly) fictionalized version of Angelo Mozilo, whose name may have come up here a time or two.

The point of genre literature is to meet the reader’s interests and desires part way. This is usually considered slightly disreputable from a literary point of view, but maybe encouraging reading is a good thing?

If that’s true, Dulwich College, a London area prep school, would rank high in this revised history of literature. Its graduates include two geniuses of genre — P.G. Wodehouse and Raymond Chandler — and a respectable third in C.S. Forester, whose Horatio Hornblower sea stories played Dashiell Hammett to Patrick O’Brian’s Chandler.

Perhaps Shakespeare was vaguely sensing what became science fiction in Hamlet? The play has several references to what sounds like astronomy: e.g., “I could be bounded in a nutshell, and count myself a king of infinite space, were it not that I have bad dreams.” It’s not all that implausible that the Danish setting of Hamlet refers in some fashion to the Danish astronomer Tycho Brahe (1546-1601). Hamlet begins with discussion among night watch soldiers of what may be Tycho’s supernova of 1572. When Tom Stoppard filmed his Rosencrantz and Guildenstern Are Dead with Tim Roth and Gary Oldman, he was going through his science phase (that culminated in Arcadia in which a teenage genius of the early 19th Century anticipates the chaos theory of the late 20th Century), and thus he turned Elsinore into an observatory / laboratory.

Science fiction wasn’t a thing yet in Shakespeare’s day, but it seems not implausible that if it were a genre back then, Shakespeare would have used it.

Physicist Max Planck famously said that science advances one funeral at a time. Turning that around, perhaps new worldviews are advanced less by great thinkers than by books for boys? Maybe Poe was therefore one of the most influential minds of the 19th Century?

Post
Trump Needs To Fire Mick Mulvaney, Get Back To 2016 Immigration Plan