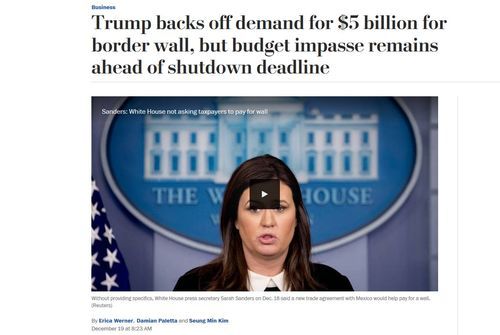 Trump Caves, Gives Democrats What They Want In Spending Bill

The White House backed down from its threat to shut down the government if Congress does not give President Trump the $5 billion he requested for the wall.

White House press secretary Sarah Sanders announced Tuesday that the administration would find “other ways” to fund the wall outside of the upcoming, must-pass spending bill. Republicans offered Democrats a $1.6 billion Homeland Security plan that would cover some border security and the President’s immigration policies. [Trump backs off demand for $5 billion for border wall, but budget impasse remains ahead of shutdown deadline, by Erica Werner , Damian Paletta and Seung Min Kim, The Washington Post, December 18, 2018]

Democrats rejected that offer, with House Minority Leader Nancy Pelosi saying, “[Senate] Leader [Chuck] Schumer and I have said that we cannot support the offer they made of a billion-dollar slush fund for the president to implement his very wrong immigration policies.”

Democrats said they will only support a more restricted $1.3 billion provision in the spending bill, a power move designed to show their strength in the upcoming Congress.

And Republicans capitulated to the strength of Democrats. It was announced Wednesday that the Senate would agree to a temporary spending bill, which will extend to February, and include nothing for the wall. [Senate to pass bill that would keep government open, deny Trump wall funding, by Erica Werner, John Wagner and Damian Paletta, The Washington Post, December 19, 2018]

Trump’s threat turned out to be another farce and we are not going to get a wall. There are no real “other ways” to fund the wall with a Democratic-controlled House.

On Wednesday, Trump said that the wall could be built by the military with the Defense Department’s budget. But this path is incredibly tricky. [Trump insists military will build the border wall, by Caitlin Oprysko, Politico, December 19, 2018]

To appropriate the necessary $25 billion or so for full wall construction from the Pentagon’s budget, the White House would need congressional approval. That’s not going to happen with Democrats controlling the House. The other option for the administration on this front is to find legislative language that allows the president to shift DoD funds for other purposes. The administration wouldn’t be able to appropriate the full amount for the wall, but they would get much more than what’s likely to be approved in this spending bill. [Could Trump Actually Use Military Funding for His Border Wall?, by Priscilla Alvarez, The Atlantic, April 2, 2018]

But that second option could easily be blocked by legal challenges, a common theme for the Trump administration. The line that the military will pay for the wall is most likely a ruse to calm Trump’s base.

The fact that there is no money for the wall in the last budget a GOP-controlled House will oversee means that there will be no wall by the time 2020 comes around. The president needs to offer some hope--even if it is a fantasy--to his supporters over the next two years.

While the Trump base isn’t getting a wall, I guess they can be content with criminal justice reform and increased foreign aid to Central America.