“The World Has Changed Way Too Much”: The Battleground Florida of Trayvon Martin, Raymond Herisse—And Gary Lenard Holmes 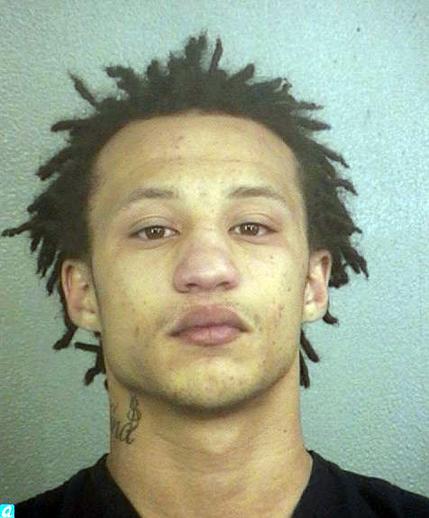 Mug shot of Gary Lenard Holmes; note the jailhouse tattoos on his neck

Florida, as journalistic shorthand has it, is a “battleground state”—not just in the presidential election, but because of the silent struggle raging as relentless immigration-driven demographic shift brings into question whether the state can remain part of the territory of the historic American nation.

The crime epidemic that drove George Zimmerman to become a neighborhood watch captain (see below), leading to his fatal encounter with Trayvon Martin, is one symptom of this struggle. The furor over the shooting of “Haitian Youth” Raymond Herisse in Miami Beach last Memorial Day, during the increasingly chaotic celebration of “Urban Beach Week, was another (Most people will have by now forgotten, but black activists and their Main Stream Media allies sought mightily to turn the Herisse shooting into a typical race hoax, in which a sweet, innocent black male was murdered by racist cops. It just didn’t take.)

The story I report below is a third symptom. It happened two weeks before the Zimmerman/ Martin case. But you didn’t hear about it, did you? One guess why not.

On February 12, a 25-year-old Coral Springs mom was sleeping with her one-week old newborn. It was a lovely Sunday night, and she’d left the sliding door in the other room open a little, for ventilation. At about 8 p.m., she was awakened by the sound of someone opening the door all the way, and entering.

She grabbed her cell phone and dialed 911, but before she could tell the dispatcher her address, the perpetrator was on her, slashing her hands and grabbing the phone. He demanded valuables from her.

The victim put up a ferocious struggle. The attacker dragged her to the kitchen, where he forced her to wash the blood off her hands, then dragged her into another bedroom, where he raped and sodomized her, thereafter sexually assaulting her in the hallway. All told, he sexually assaulted her three times. Throughout the ordeal, he beat her repeatedly about the eyes, and choked her until she almost passed out.

Fortunately, the attacker neglected to disconnect the victim’s cell phone. With the line still open, police were able to hear part of the attack, triangulate the house’s approximate location, and assemble squad cars in the vicinity from the Coral Springs, Coconut Creek, Lauderhill and Margate PDs, and the Broward County Sheriff’s Office, while waiting for a call with the woman’s exact address. As soon as the assailant left the victim’s home, she called 911 again from her land line, gave her address and a description of her assailant. Suspect Gary Lenard Holmes, 19, was caught in the neighborhood with a huge knife.

The victim’s determined defense may well have saved her life. A similar struggle did not save Anne Pressly, but here are no rules here: in one attack, resistance may be the key to survival; in another, submission.

“The World Has Changed Way Too Much.” That quote in my headline is from a middle-aged white neighbor, Jaemi Levine, who said she witnessed the arrest, telling Miami Fox affiliate WSVN:

“He was screaming, he was holding the knife to his throat, he was crying and saying, ‘Bleep the police.’ He had this huge thing [knife] that he threw at the police.”[See video, here, and also Gary L Holmes caught after young mother secretly dials 911 during attack, The Daily Mail, February 14, 2012]

Holmes’ grandmother sounds like a decent person from a world gone by. Her sense of shame and dignity in a black world gone shameless had her ask WSVN’s photographer not to show her face. And she did not engage in the despicable yet in the meantime routine black practice of screaming that her baby was an honor student, an innocent victim of racism:

“I would have never known that he would do something like that. How dare he do that? Go out there and then go in somebody’s house? He didn’t have to do that. He ain’t no poor person or nothing like that, because we give him whatever he needs.”

[Police: Mom choked, raped by 19-year-old, by Nicole Linsalata, WSVN, February 14, 2012. Note both victim and accused are raceless in this account]

The grandmother may be a decent person—but her grandson is not. Gary Lenard Holmes has been “charged with three counts of armed sexual battery, one count of burglary with a battery, one count of armed occupied burglary and one count of petty theft.” [Suspect held in Coral Springs rape case, by Juan Ortega, Sun Sentinel, February 13, 2012.] He is being  held without bond. [No Bond for Man Charged in Brutal Home Invasion Rape in Coral Springs | NBC 6 Miami, February 14, 2012]

At the time of Holmes’ first felony arrest, in 2001, he was nine years old:

According to a Florida Department of Law Enforcement report, he was arrested five times before turning 18. The first when he was just 9, when he was charged with battery against an elected official or education employee, a third degree felony….

His other arrests included striking a principal, strong-armed robbery, burglary and battery.

Holmes is apparently the son and namesake of Gary Lenard Holmes, 46, also of Pompano Beach, who has a long rap sheet of felony arrests and convictions during the 1980s and ‘90s for armed robbery, and for possessing and trafficking in drugs. Both men also have dollar sign tattoos in common. (I’m hoping the grandmother is on the mother’s side.)

Although the younger Holmes’ “no contest” plea for his 2010 burglary was the equivalent of a guilty plea, it appears that he received no punishment.

No judge can invoke Holmes’ juvenile record. But considering his burglary conviction, the violence which he inflicted on his newest victim, and the multiple charges, he ought to get life, without even the need for a trial. After all, he did confess to everything.

And once upon a time, that was how these things worked.

But what is more likely to happen today is this:

With the assistance of his taxpayer-supplied attorney, Holmes will recant his confession, claiming that the police coerced it out of him, that he was suffering from allergies, or that the moon was full, and will plead not guilty to all charges. Given the current “10 strikes, and you’re out” parallel criminal justice system serving members of protected classes, the prosecutor will likely offer him a wildly discounted plea bargain with most of the charges dropped. He will be sentenced to, say, 10-20 years in prison. And he will be paroled in five to 10, ready to pick up his life’s work where he left off.

Between 2000 and 2010, Coral Springs did indeed change—it tipped demographically. According to the Census Bureau, it went from 69.9 percent to only 51.6 percent non-Hispanic white.

Coral Springs and Pompano Beach are both in South Florida’s Broward County, which experienced an even more dramatic upheaval during the first decade of the new millennium, dropping from 58 to 43.5 percent non-Hispanic white. During the same period, the county went from being 22.2 to 26.7 percent black, and from 16.7 to 25.1 percent Hispanic.

That is jailbreak-style, mass, unregulated, legal and illegal Third World immigration at work. Note too that a substantial portion of the black population comes from Haiti, where sub-Saharan level IQs (72) and living conditions are the norm. (The entire state has an IQ of approximately 98, and falling.) Almost one in eight black Floridians speaks Haitian Creole.

Using the national Total Crime Risk Index (TCRI) as a baseline (100), Florida has a 124 TCRI, 24 percent higher than the national norm. The victim’s hometown, Coral Springs, has a 58 TCRI, 42 percent below the U.S. norm.

I suspect that the plutocrats running the U.S. into the ground think that, as diversity marches on into (almost) every nook and cranny of America, these embarrassing crime statistics will equalize.

Alternative possibilities are that the authorities will produce ever more fictional crime statistics or, as in South Africa once it achieved the distinction of being the world’s murder capital, they will simply stop providing updated crime statistics at all. In any event, the plutocrats will live in heavily fortified sanctuaries.

According to WSVN’s Linsalata in her report from Coral Springs:

Now, the women in the community are forming a neighborhood watch and vow that this incident won’t happen again. “I’m very, very upset and I’m very mad,” said Debbie Knoll. “We're all here to stand with her.”

Remember, this was two  weeks before George Zimmerman made neighborhood watches famous.

My advice, alas too late for the victim in this story: the best security for any homeowner is provided by a loaded handgun within easy reach. Sliding doors are best secured by not only locking them, but by simply placing a sturdy stick flat and secure in the door’s bottom track.

Listen to me. I’m talking about life in a world in which one must prepare for the worst at all times: On the street, in one’s car, on public transportation, in church, and even in one’s own home.

Life in the pre-diversity—i.e., pre-civil rights revolution—America was not at all like this. Back then, the Gary Lenard Holmeses were a miniscule portion of the population, the Raymond Herisses were all in Haiti, and the Angel Maturino Resendezes (the “railroad killer”) were almost all in Mexico. “In many neighborhoods, houses were left unlocked and children could go about unsupervised”, as F. Roger Devlin observed while reviewing Charles Murray’s new book, The State of White America—not to be confused with my own The State of White America, published by the National Policy Institute five years before Murray’s!.

Florida, particularly South Florida, has gone, in a generation or two, from a tropical American paradise to a multicultural hellhole.

Between incurious liberal “reporters,” and police spokespersons who passed their department’s diversity training with flying colors, we are probably never going to get an honest answer as to why Holmes chose just that neighborhood. My educated guess: he was aware that it contained plentiful white prey.

America’s ruling plutocrats and their political beards fancy themselves insulated from all this. They are deluding themselves. But what will it take to make the scales fall from their eyes?

Florida can still be saved. But it will take a moratorium on immigration, legal and illegal alike, and the elimination—whether by attrition or strategic deportation—of the entire illegal alien population.

And that will still leave the black race war raging.

Nicholas Stix [email him] is a New York City-based journalist and researcher, much of whose work focuses on the nexus of race, crime, and education. His work has appeared in Chronicles, The New York Post, Weekly Standard, Daily News, New York Newsday, American Renaissance, Academic Questions, Ideas on Liberty and many other publications. Stix was the project director and principal author of the NPI report, The State of White America-2007. He blogs at Nicholas Stix, Uncensored.