The Wild Ones and the Mild Ones: The One-Sided War Over Black Terror Week 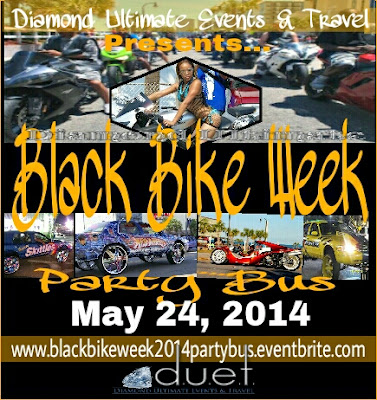 On Memorial Day weekend, this year May 23-26, the historic American nation honors its fallen heroes, who died so that we could be free. But for many blacks, Memorial Day was just another opportunity to unleash orgiastic violence, this time under the guise of black biker festivals. They seek to erase the celebration’s spirit, and even its name.

Thus, in what has become a regular occurrence, violent incidents broke out on Memorial Day around the country. In what is also a regular occurrence, the national Main Stream Media engaged in its usual non-reporting on mass black violence while local outlets engaged in cover-ups—for example, showing massed policemen in riot gear, but refused to use the many videos and photographs of the perpetrators that witnesses sent them, and using euphemisms to describe the mobs.

Ground Zero in the Palmetto State: the tiny, 82 percent-black town of Atlantic Beach, which sponsors “Bikefest,” aka “Black Bike Week.” According to a city employee who spoke to me on a “not-for-attribution” basis, “300 to 400,000” people came through Atlantic Beach on Memorial Day weekend. The employee told me that the town had no facilities for the bikers to stay in, so that they had to find accommodations “in the surrounding jurisdictions.”

Atlantic Beach has a police force of “one and-a-half officers.” It called in massive help from the Carteret County Sheriff’s Office, South Carolina State Police, and State Highway Patrol.

But the person I spoke with was aware of few, if any arrests. Neither the town’s one full-time policeman, Officer Mike Abruso, [Email him] nor town manager William Booker [Email him] returned my messages, local media refused to report on what happened in Atlantic Beach, and the Carteret County Sheriff’s Office demanded I send in a Freedom of Information Act request before it would provide routine, public information.

Where N—-s can’t do s—t without being arrested.

Agrees to let them do whatever the hell they want for one weekend.

In Myrtle Beach, the Black Bikefesters raised holy hell. Ten people were shot, three of whom died in a mass murder at the Bermuda Sands Hotel. [Myrtle Beach group to address Ocean Boulevard businesses that contributed to poor Memorial Day weekend behavior by Maya T. Prabhu, The Sun News, June 12, 2014; and Report provides new details on triple homicide at Myrtle Beach motel, WMBF News, last updated May 27, 2014.] The MBPD closed the case regarding the shootings of two siblings at the Wave Rider Resort because the victims and witnesses all refused to cooperate with the authorities. [MBPD close case in Memorial Day weekend shooting by Brooke Holden, WMBF News, June 6, 2014.]

Myrtle Beach Mayor John Rhodes said, “This past weekend was the worst I’ve seen in Myrtle Beach and I’ve been here for 51 years. It was like our city being under siege.”

The violence was so bad that South Carolina Governor Nikki Haley has called for the abolition of Bikefest and offered financial help to Atlantic Beach.

The Myrtle Beach Against Bikefest Facebook page has over 19,000 “likes”. 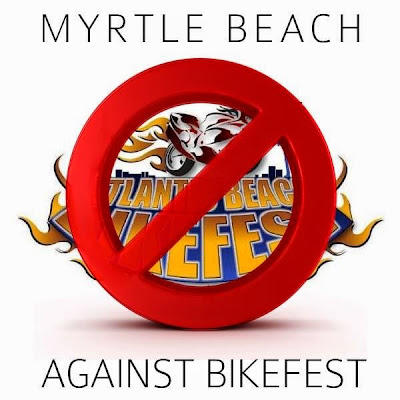 Bikefest opponents twist themselves into knots, insisting “it’s not a race thing.”

1. The violence in Myrtle Beach had nothing to do with Bikefest; and

2. The violence was completely the fault of Myrtle Beach officials, who failed to prepare adequately for Bikefest. 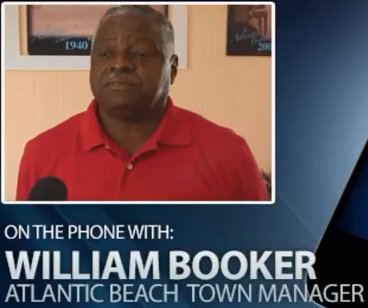 Atlantic Beach town manager William Booker, who is black, responded that no studies [!] had shown a connection between Bikefest and the violence, and that he had no intention of changing a thing. Atlantic Beach Mayor Jake Evans,[Email him] who is also black, echoed Booker. [Atlantic Beach mayor: "We don't plan to end Bikefest" by April Baker, Carolina Live, June 2, 2014]

Other black Bikefest supporters went so far as to blame Myrtle Beach for the violence that plagued it. Georgetown, SC activist Violet “Heels” Lucas asserted, “It's not fair to not properly plan for 380,000 people,” as if it were Myrtle Beach that had sponsored Bikefest, rather than Atlantic Beach. [Atlantic Beach residents, Bikefest participants express support for annual festival by Maya T. Prabhu, The State/The Sun News, June 3, 2014.]

At Atlantic Beach’s June 2 town council meeting, Bikefest wasn’t even on the agenda, but some attendees insisted on raising the issue—in support of Bikefest!

The racial terror that the City Fathers of Atlantic Beach is defending is not limited to violence. It includes massive theft of services, with blacks walking out without paying restaurant tabs, trashing hotels and motels, and waging lawfare. [State: Myrtle Beach police received all BikeFest officers they requested by Tom O’Dare, My Horry News, June 6, 2014.]

None of the articles I found about Memorial Day mentioned the NAACP, but this black organization’s hands are drenched in the blood of Bikefest, through its years-long lawfare campaign against Myrtle Beach. 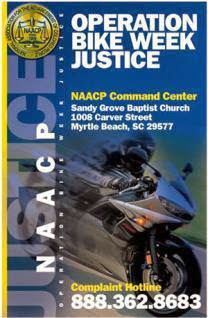 Whenever a Myrtle Beach business or the city government has sought to protect itself from black crime during Bikefest, the NAACP has trolled for black litigants and filed frivolous lawsuits on their behalf. For example NAACP, Molly Darcy’s agree to dismiss Atlantic Beach Bikefest discrimination lawsuitby David Wren, The Sun News, October 19, 2012. (Black litigant Leon Hines admitted that he had been served at the restaurant before but was upset that the restaurant didn’t stay open to serve him during Bikefest).

Even though these are private businesses, which have every right to close their doors anytime they wish, the NAACP, a classic vexatious litigant, aided and abetted by activist federal judges, unconstitutional civil rights laws, and racist black “victims,” has successfully enslaved many white-owned businesses and majority-white municipalities.

The NAACP asserts that if the city or a business acts in any way differently for Bikefest than it does for predominantly white Harley Week the week before, it is guilty of “racial discrimination.” Thus, even though Harley Week is relatively crime-free, if police arrest a greater proportion of blacks during Bikefest (as if blacks committed crime at the same rate as whites) or businesses charge higher prices during Bikefest to make up for the crime, that’s “racial discrimination.” But, although the NAACP claims that businesses get rich off Bikefest, many of them actually lose money off the event.

As part of the NAACP’s shakedowns, it has promoted the racial fairy tale that Harley Week is more violent than Bikefest. [NAACP Sues Myrtle Beach for Discrimination by Dan McCue, Courthouse News Service, May 31, 2011.]

But the facts do not bear this out. Hundreds of state, local, and county law enforcement officers are deployed to try and maintain order during Bikefest. The Myrtle Beach PD reported arresting or citing 1,104 individuals. The North Myrtle Beach PD reported 594 arrests and citations (over 80 percent were citations). But Political Correctness prevails. Its public information officer, Patrick Dowling (not a law enforcement officer), asserted to me that the city does not record the race of arrestees. “It’s [Black Bike Week] not a racial event.”

I pointed out to Dowling that every PD in the country records the race of every arrestee, and sends the stats to the FBI every year. He claimed that the city did not keep such statistics, but that he would be glad to compile them for me … for a fee.

This was a new obstruction gambit. The information I was seeking is public information which is not to be sold to the press for a price. (At least Dowling did provide me with the raw arrest/citation numbers).

Most law enforcement agencies are just not crazy about the notion of an informed public.

The truth is that for these celebrations, the violence is inseparable from the blackness, and is supported not just by “thugs,” but by “respectable” blacks of all social classes.

There is a word for when one group completely mobilizes to violently attack and otherwise harm another group, and erase its culture: war. And instead of getting to honor our veterans, we have to deal with people who think Memorial Day is an excuse to bring the war home.