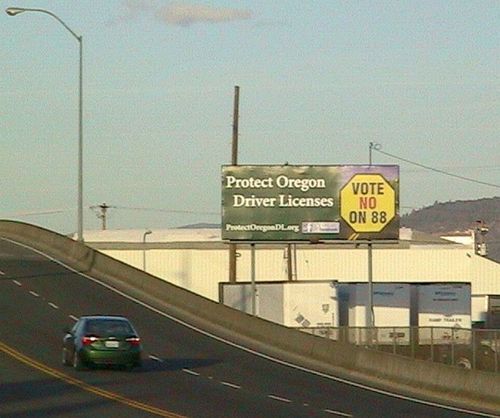 Enough is enough. An important bloc of voters made their voices heard on Tuesday. Their message: Quit rewarding people who violate our immigration laws. They chose a sovereign nation over an illegal alien sanctuary nation, and they told politicians in both parties loud and clear: Put Americans first.

These voters are tired of politicians creating magnets for illegal immigrants. They're tired of preferential treatment for defiant border-crossers, visa overstayers and deportation fugitives. They're tired of the heavy costs and consequences of the government's systemic refusal to protect its borders and fully implement interior enforcement.

Pay attention, both parties in the Beltway: These aren't voters in a red-state bastion. They're fed-up voters in bright blue Oregon—a whopping 941,042 of them, to be exact—who overwhelmingly rejected a ballot measure to provide special driver's licenses "without requiring proof of legal presence in the United States."

When Democratic Gov. John Kitzhaber and radicals in the state legislature tried to push through illegal alien driver's cards against the will of the people, the people struck back and forced a full public vote and electoral accountability.

"Citizens expect our lawmakers to uphold our laws, not work at finding ways to circumvent them," said the group Protect Oregon Driver Licenses. "Oregon is the only state in the country that (gave citizens the) opportunity to vote on giving driver cards to those who cannot prove legal presence in the United States." If only every state had the power of initiative and referendum. Ten states, including California, Connecticut, Colorado, Illinois, Maryland, Nevada, New Mexico, Utah, Vermont and Washington, plus the District of Columbia, "have had the law forced upon them with little or no recourse available to them."

Listen up, D.C.: The Oregon proposal went down in flames by more than a 2-to-1 margin. More voters weighed in on Measure 88 than any other single candidate or question on the ballot, including the campaigns for governor, U.S. senator and marijuana legalization.

Who opposed the referendum? Grassroots citizens and a majority of common-sense sheriffs in Oregon who were outspent 10-to-1.

The police, sheriffs and border patrol agents who opposed Measure 88 forcefully connected the dots between immigration enforcement and homeland security. As I've reported repeatedly over the years, driver's licenses are tickets into the American mainstream. They allow residents to establish an identity and foothold into their communities. They help you open bank accounts, enter secure facilities and, yes, board planes.

The anti-Measure 88 law enforcement officers were joined by Derek Hernandez, vice president of the Western Region National Border Patrol Council, and Maria Espinoza, national director of The Remembrance Project. Espinoza is a Mexican-American activist whose group "is dedicated to honoring and remembering Americans who have been killed by illegal aliens." As she pointed out to Oregonians, "Americans are neither allowed nor do they expect being able to provide unverifiable documentation when applying for licenses, jobs, voter registrations, loans or any of the many activities requiring proper identification. Why should illegal aliens be afforded this ill-begotten privilege?"

Pro-Measure 88 advocates disingenuously argued that the law was "pro-public safety" because it would allow Oregon to know who is living in the state. But Espinoza correctly notes that Mexican government offices embedded in the U.S. continue to issue shady "matricula consular" identification cards "without proof of identity, in their efforts to achieve quasi-legal status for Mexican illegal aliens in the United States."

As President Obama and the U.S. Chamber of Commerce conspire in Beltway backrooms to provide tens of millions of work permits for illegal aliens through administrative fiat, the new GOP majority on Capitol Hill better heed the defeat of Measure 88.

Cynthia Kendoll, president of Oregonians for Immigration Reform, spoke for law-abiding voters across the country who are "sick and tired of big business, special interest groups and unions controlling our government." They're tired of government-manufactured chaos, government-sponsored double standards and government-imposed benefits for millions of law-breakers who supply cheap labor and cheap votes to bipartisan special interests. Illegal alien driver's licenses are a catalyst for politically driven amnesty, Mexico's poverty exportation plan and corporate wage suppression.

American voters of all backgrounds, political affiliations and incomes don't want any part of that racket. Enough.