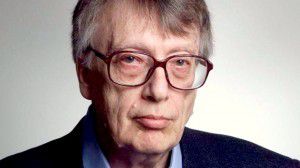 Conservative (he preferred "classical liberal" ) Canadian commentator and poet George Jonas has just died, as I learn from Twitter.

Jonas was born in Hungary, and was an immigrant of the "Class of '56"—the genuine refugees produced by the failed Hungarian Revolution of 1956. He was an anti-Communist in a pro-Communist milieu—Canada's print and broadcast media.

Jonas recently wrote about the modern kind of immigrant, who comes to take over:

Arab or Hispanic, legal or illegal, in North America or in Europe, the last 45 years have marked the emergence of a new kind of immigrant. He isn't new to history, but he's quite unlike the customary refugee, exile, asylum-seeker, settler, or pioneer.

The invader-immigrant appears in times of fundamental population shifts, the great migrations of history. Such migrations occur from time to time. They did, for instance, between the 3rd and the 5th centuries. Just as the invader-migrants of other historic periods could be of any tribe — Hun, Gepid, Lombard, Avar, to name a few — the invader-migrants of our times may be Asian, Levantine, or Caucasian. They may be Muslim, Sikh, Christian, or anything else. Invasion as a concept isn't race- or religion-specific, though it's usually tied to specific groups and cultures at specific points in time.

Whatever their background, the new kind of immigrant doesn't simply compete with the host population for economic opportunity and space (which can be shared) but for identity, which cannot. Immigrants can and do create jobs, but can't create identities for the host population, only compete for the existing identity of a nation.

This makes certain "small" matters, often dismissed as merely symbolic — permitting turbans on construction sites, say, or ceremonial daggers in schools — actually more important than ostensibly hard-nosed economic issues. A flag — a piece of fabric on a stick — is just a symbol, but a demonstration in America conducted under an American flag is materially different from one conducted under the flag of Mexico. The first is a country trying to share a problem; the second, a problem trying to share a country.

Our Band-Aid solution to the refugee crisis, September 9, 2015

You don't get a lot of people writing like that in the Canadian media—now there's one less. I've had occasion to quote Jonas a few times in the past (for example, in Age Of Disloyalty)and probably linked to him more often.

His 1987 book Crocodiles in the Bathtub compared the naivete of Communist supporters in the West to the kind of people who like to keep exotic pets, while telling you they're perfectly safe. Some of Western Europe's refugee importing enthusiasts might learn from that.

Just before he died, Jonas published a book of poetry:

The poems in this collection, selected by Anna Porter, Barbara Amiel, Robyn Sarah, and Marc Côté, demonstrate great depth and breadth over Jonas's career. From the occasional poems of the 1960s, when he was writing as a young man, to the variations and translations of great European poets - from Goethe to Faludy - when he is writing as a much wiser, older man, the poetry reveals a sensibility entirely contemporary and original, but steeped in grand tradition, a writer very much engaged with the things of his world.

A book launch party was held on December 10, with poetry readings—listen to some of them here.