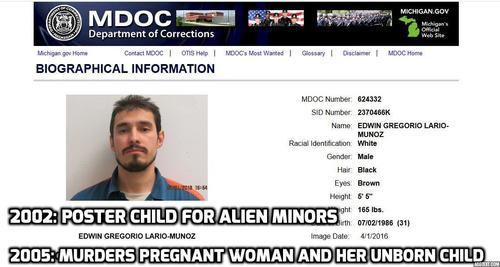 Ann Coulter's recent column is about lying asylum seekers. There's a lot of lying. To quote Dan Cadman of  CIS, writing in March 2014.

Applicant Credibility. Because in many, perhaps even most, cases, an individual cannot prove with direct evidence that he has been a victim of past persecution or that he will be subject to future persecution sufficient to meet the well-founded fear standard, great weight is given to his testimony, demeanor, factual representations, etc. Unfortunately, the weight given to credibility is so well known among aliens, shadowy third parties, and the less-scrupulous practitioners of law, that it has bred a virtual cottage industry of “coaches” who assist in putting together facially credible tales of persecution to be used in the individual’s formal application and face-to-face interview when summoned by the authorities.24

[Emphasis mine, except for the subhead. This also applies to all emphases below.]

As alleged in the indictments, at least 10 New York City area law firms created and submitted these fraudulent applications on behalf of alien applicants and coached them on how to lie to immigration authorities. Of the 26 defendants charged, 21 work at the various law firms, six as attorneys. Also charged are four translators who work at an asylum office in Queens, New York; and an employee at a church in Queens where she allegedly provides training in basic Christianity to asylum applicants falsely claiming to have been persecuted in China for their religious beliefs.

Here's a case of a bogus asylum applicant has been forgotten, one whose "plight" was, as Thomas Allen wrote here in 2006, "effectively used to end the enforcement of immigration law regarding 'unaccompanied minors'" (Spoiler alert: the putupon moppet will turn out to murder a pregnant woman and her unborn child.)

He eventually received asylum and was called to testify before Congress about mistreatment while in federal custody. He called the youth detention center where he stayed “the worst place I have ever been in life.”

You can still read Larios Munoz's 2002 testimony online. It starts out

My name is Edwin Larios Munoz. I am 15 years old and in eight grade at Thornapple Kellogg Middle School in Middleville, Michigan. I live with my foster parents. I enjoy math and soccer and want to be an FBI agent when I grow up.

On Oct. 14, 2005 Lario-Munoz strangled Sylvia Sanchez-Parada, who was six months pregnant, in the apartment below his where the woman lived with her husband and 9-month-old child at 848 Baxter St. SE.

He killed Sanchez-Parada and attacked her husband, Leoncio Garcia-Lopez, with a knife and grilling fork. Garcia-Lopez, who now lives in Mexico with his young son, came home to find his wife dead in the couple's kitchen.

The spelling of Edwin's last name changes between 2002 and the coverage of murder and trials post 2005. The State of Michigan has him confined as Edwin Gregorio Lario-Munoz until at least 2040. Possible explanations for the spelling change: Hondurans can't spell, handlers can't spell, Michigan law enforcement can't spell, or some kind of document fraud.

Here's some more of the 15-year old Larios-Munoz's testimony:

I am a refugee here in the United States. I was born in San Pedro Sula, Honduras. I could not stay in my country because of the abuse I lived with for years. After my father died when I was four, my mother abandoned me. I ultimately ended up living with a cousin. For over seven years, from when I was 7 to when I was 13, my cousin forced me to work on the streets and give him the money. When I didn't earn enough money, he punished me, beating me with a noose, car tools and other objects, leaving scars on my body, like the knees, legs and arms. [More] 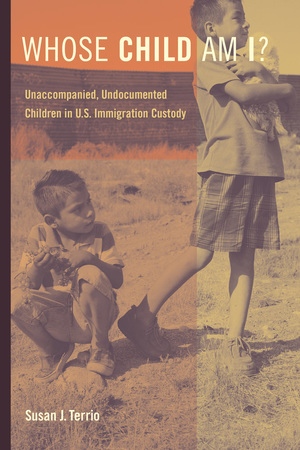 These scars may have been imaginary--they weren't large enough to be considered identifying marks by the Michigan correctional system's Inmate Locator (the source of the image above). I'm assuming that his reports of mistreatment are lies, and the ambition to be an FBI agent was suggested by his handlers.

Handlers, you  ask? There seems to be some kind of controversy over whether immigrants complaining of abuse can be called actors, or whether they are coached, so let's ask that question about young (pre-murder) Edwin. Was he an actor? Was he coached?

Of course he was! No one ever testifies before Congress who isn't coached, and I can tell you who coached him, because it was published in Whose Child Am I?: Unaccompanied, Undocumented Children in U.S. Immigration Custody, (2015) by anthropology professor Susan J. Terrio. From p. 65

In congressional testimony based on visits to eighteen secure facilities and juvenile detention centers run by the INS, Wendy Young, then supervising attorney for the Detention Asylum Project at the Women's Commission for Refugee Women and Children, cited numerous examples of harsh treatment, prolonged detention, and illegal deportations by INS officers. She viewed these "gaps in U.S. policy" as the inevitable outcome of an "irreconcilable conflict of interest" between the competing [INS] responsibilities of prosecuting the children and caring for them. She cited the INS preference for "enforcement goals" and its blatant disregard for the basic needs of detained children. Young brought former detainees with her to the hearing, including Edwin Larios Munoz, who fled violence in his native Honduras. Edwin painted a heartbreaking picture of loss, abandonment at the age of four, and sustained abuse by a cousin. Leaving home alone at thirteen, Edwin worked his way through Central America, finally crossing the U.S.-Mexico border four months later, in August 2000. He was arrested by U.S. Border Patrol agents, shackled…and transferred to a juvenile jail for violent offenders. While in detention, he suffered appalling mistreatment.

Or anyhow he said he did. Wendy Young [Email her] is now president of KIND ("Kids In Need Of Defense") which is currently agitating on the illegal allien border kids, in the hope loosing more Edwins into the country.

More from Whose Child Am I?:

Edwin was fortunate: a legal aid team screened him and found a competent pro bono attorney who helped him apply for legal relief. An immigration court judge granted his petition in July 2001, seven months before his Senate testimony. Despite this outcome, Edwin reminded the subcommittee of the lasting effects of his detention:

It took me a while to feel at home in Michigan. Still have horrible memories over what I went through with INS and at the San Diego jail. I saw many children like me who gave up fighting their immigration cases and accepting deportation because they hated the jail and did not have attorneys.

Though Terrio's book was written in response to the 2014 Border Surge of "unaccompanied minors", and published 10 years after Edwin's murder of a woman and her unborn child, Terrio [Email her] makes no mention of any subsequent activities by this oppressed young man.

Partly as a result of his testimony, certain “unaccompanied minors”—a new immigrant classification that brings extraordinary immigration privileges—are no longer the responsibility of immigration authorities. Instead they are handed over to a federal welfare agency, the HHS Office of Refugee Resettlement (ORR). 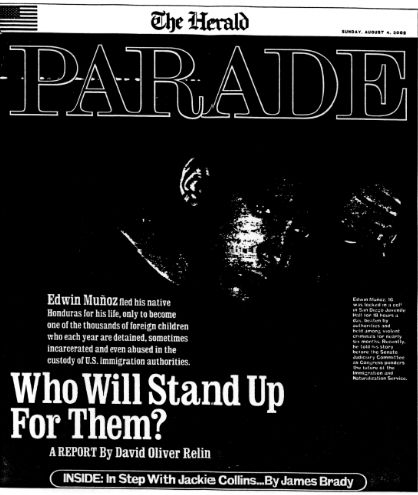 Munoz' testimony riveted the MSM for a while. His freedom-seeking-orphan-thrown-in-jail-by-the-INS story appeared in the LA Times, Boston Globe and San Diego Union-Tribune, and even made the cover of Parade Magazine. [Who Will Stand Up For Them?,byDavid Oliver Relin, Parade , August 4th, 2002 (PDF)]

Unfortunately, no one testified before Congress about his apparent lying and violent and aggressive behavior, which had caused the INS to oppose an asylum grant and which had caused the government to transfer the youth to a secure detention facility until the matter could be settled.

Munoz was granted asylum and went into the U.S. foster care system at taxpayer expense in Grand Rapids, Michigan.

But in October 2005 he was back in custody for allegedly murdering a neighbor—a pregnant woman—and attempting to kill her husband.

The story barely got beyond the local newspaper.

When it did, it was covered on strict "Man Arrested" basis, with no mention, especially in headlines, of the immigration status of anyone involved. The most informative story, which begins "A former Honduran refugee who testified before Congress three years ago about the struggles of young immigrants was charged Monday with killing a pregnant woman and her unborn child." was headlined Slaying charges include death of fetus [By Ken Kolker, The Grand Rapids Press, October 25, 2005]

Here are almost all the headlines currently available in Google, from local Michigan sources.

Search for "Edwin Lario-Munoz" --18 items.  (The first page of search result says 81, but if you click through there are only two pages.)

Search for "Edwin Larios-Munoz"--20 results (down from 67 when you click through) but instead of being local police blotter stories about a murder the national press doesn't care about, they are Treason Lobby sites and books like the Susan Terrio one above.

The bill was partly written and promoted by the U.N. refugee agency UNHCR and money-making U.S. refugee contractors.

Senator Feinstein, who was responsible for stripping immigration authority from DHS for unaccompanied minors, concedes “It was a very hard battle to get this approved by the Senate and we still have a tough battle in the House.”

Would the Senate have even considered the bill if Edwin Munoz had been on the front page of Parade magazine after the latest turn of events?

Well, of course, it wouldn't go on the front page of Parade, or any other MSM journal, unless Edwin could have contrived to do it with an AR-15, because it doesn't fit the Narrative.

That's why the MSM acted so freaked out when Trump mentioned Mexican rapists, or when Ann Coulter called young "asylum seekers" child actors on television.

Some of the MSM have literally never heard of such a thing, and those who have heard of it have been ordered (by their editors, by the AP Stylebook, by "activists", and by the Leftist Hive) not to report it.

But whether they believe it or not, these facts remain--the "minors" are dangerous, and the Treason Lobby is training them to lie.

James Fulford [Email him] has been a writer and editor at VDARE.com for almost 20 years.