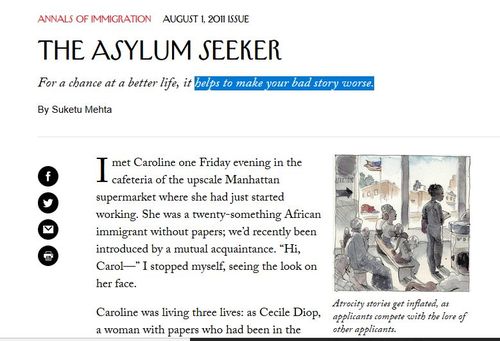 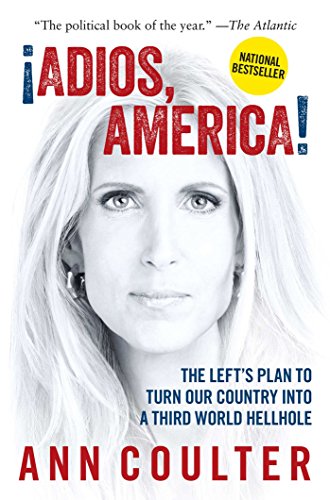 Journalists know absolutely nothing about immigration and refuse to learn, so when I cited the fraudulent "humanitarian" cases on TV Sunday night, I footnoted myself live on air, citing a New Yorker article as well as my book, "Adios, America," which has nearly 100 pages of footnotes. That should make it easy for even the stupidest reporters.

Armed only with the information that there was an article in a tiny little publication known as "The New Yorker" about asylum applicants being coached on their fake asylum claims, how could an American reporter ever hope to locate "The Asylum Seeker" in the Aug. 1, 2011, New Yorker? Forget "Adios, America," where it is cited, along with many, many other sources. I can't read a BOOK, Thomsen thought to herself.

I Googled "New Yorker asylum," and the article I was referring to came up as the third item in the list. Add "coaching" or "coached," and it's the very first item Google gives you. It took 3 seconds.

Thomsen: HOW DOES GOOGLE WORK, ANYWAY?

The New Yorker article begins with "Caroline," an illegal alien from a middle-class family in Africa, who passed herself off to U.S. immigration authorities as a victim of rape and torture. As she admitted to The New Yorker, while giggling: "I have never been raped."

Fortunately, "Caroline had been tutored in how to act like a rape victim by her landlady in the Bronx, who hadn't been raped, either, but had successfully applied for asylum."

As she prepared to weep and lie through her interview with a very tough American immigration officer about her nonexistent torture and rape, Caroline said of the country she was lying her way into: "I don't know why I didn't just go back. They are racists and xenophobes here."

Glad to have you, too, Caroline! (At least you'd make a better reporter than Thomsen.)

Luckily, we have the very best government officials reviewing asylum applications. (Pasted on the window of one immigration official's office was a cover from the official Cuban Communist newspaper.) Caroline's completely apocryphal asylum application was, naturally, approved. 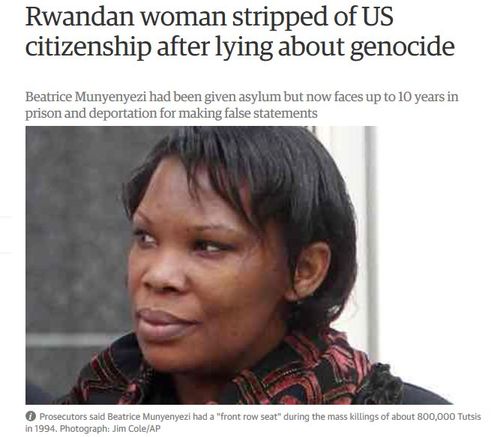 Our immigration officials are so thorough, so hard to fool, that they granted Beatrice Munyenyezi asylum and citizenship, allowing her and her kids to live off the U.S. taxpayers for 10 years before federal prosecutors noticed, Hey! Munyenyezi wasn't a victim of the Rwandan genocide; she was a perpetrator! Munyenyezi had personally sentenced thousands of Rwandan women and children to death.

And now the poor murderess has been SEPARATED FROM HER CHILDREN!

Crack reporter Thomsen must have missed that story, too. For her reading pleasure, assuming she can read: Chris McGreal, "Rwandan woman stripped of U.S. citizenship after lying about genocide," The Guardian, Feb. 22, 2013.

One asylum applicant written about in The New York Times claimed she was being persecuted in Russia because she was gay. She told her immigration lawyer, "I'm not gay at all. I don't even like gay people." (For ace Hill reporter Thomsen, who is hopelessly confused about "books" and "Google," the cite is: Sam Dolnick, "Asylum Ploys Play Off News to Open Door," The New York Times, July 12, 2011.)

Usually, frauds are only exposed when the asylum applicant makes the news. You'd think one of these times, an asylee would become famous and we'd find out: Hey, this person really was fleeing persecution!

Nope. The pattern is: They make the news; we find out their asylum applications were total frauds.

Here are a few:

Ramzi Yousef was the mastermind of the 1993 World Trade Center bombing and the Bojinka plot, as well as the nephew of 9/11 architect Khalid Sheik Mohammed. Poor Yousef almost didn't make it through customs. Not only was his own passport of dubious provenance, but his traveling companion was carrying bomb manuals, car bombing videos—and instructions on how to lie to U.S. immigration inspectors. Yousef claimed asylum and was released into our country to execute the first WTC attack.

Sofitel hotel maid Nafissatou Diallo falsely accused the head of the International Monetary Fund, Dominique Strauss-Kahn, of rape. She had been granted asylum after memorizing a tape given to her by an American immigration activist about being gang raped in Guinea. (For Jackie "How does Google work?" Thomsen: That's from the same Times article cited above.)

Amadou Diallo was all over the news after being killed by four New York City police officers in 1999. Only because of that, we found that, in his asylum application, he had claimed his parents had been murdered by the Mauritanian government. APPROVED!

In fact, Diallo was born into a prosperous Guinean family and his parents were alive and well—and looking for a settlement from New York taxpayers. (For super reporter Thomsen, you'll find that story here: Alan Feuer, "$3 Million Deal in Police Killing of Diallo in '99," The New York Times, Jan. 7, 2004.)

America is the most generous country on Earth, but—as The New York Times' John Tierney demonstrated 20 years ago—even denizens of the "nicest" town lose patience when the third panhandler asks them for money. (For reporters who couldn't find their asses if you drew them a map: John Tierney, "Mean Streets," The New York Times, May 12, 1996.)

Our country is being victimized by a network of con-artist foreigners and America-hating left-wingers passing out fake papers, fake stories and fake scripts to Third-Worlders, who lie about seeking "asylum" to get in on the American gravy train and wreck our country.

And that's in normal times. 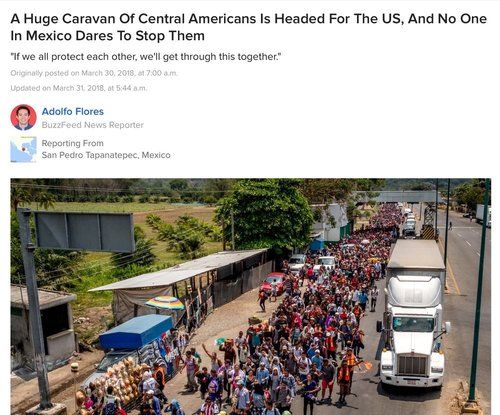 The crisis on the border today is no ordinary asylum fraud. It's a political stunt by a left-wing organization, "Pueblo Sin Fronteras"—People Without Borders—which believes, as its name suggests, that the U.S.A. has no right to have a border. This group has very publicly marched hordes of Latin Americans through thousands of miles of another country to demand entry into our country. Pueblo Sin Fronteras' monthlong trek has been so well publicized that everyone in the country knows about it—except, apparently, our media.

The New York Times describes the horror thus: "At some border crossings, migrants are being forced to wait for days or longer in Mexico."

Wait. Why don't they just stay in Mexico? Isn't Mexico a fantastic country with ZERO rapists? If not, maybe we should build something at the border—I don't know, maybe a wall?

"Wall" is a one-syllable word, so even Jacqueline Thomsen can understand that.