In Oakland, one of the persons arrested Monday during a sweep of the filthy crime-ridden Occupy zone downtown was an illegal Mexican who was then turned over to federal officials. That was the good news.

For the bad news, Francisco “Pancho” Ramos Stierle, was quickly freed on his own recognizance until his deportation hearing. Right. Who thinks he will show up?

These days, under the Obama administrative amnesty, the authorities cannot even get serious about deporting a marxican agitator.

Pancho also has a fascinating/ridiculous backstory in which he claims he was an astrophysics grad student at UC Berkeley who dropped out over worries about nuclear weapons proliferation.

And if he is so concerned about income inequality, Pancho should get active back in Mexico which has a far worse chasm between rich and poor than this country. In America, we have all sorts of generous social programs to help poor people — which is why so many impoverished Mexicans come here to get on the welfare gravy train.

Below, Pancho was arrested while performing a posture of meditation in the Frank Ogawa Plaza in Oakland. 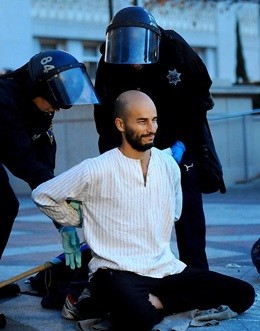 Federal immigration agents took custody Thursday of a 36-year-old activist and Mexico native who was arrested during Monday’s police sweep of the Occupy Oakland protest encampment, then released him pending a hearing in front of a judge.

Francisco “Pancho” Ramos Stierle had been booked into Santa Rita Jail in Dublin on suspicion of two misdemeanors, refusing to disperse and loitering, after kneeling and meditating at Frank Ogawa Plaza outside City Hall rather than heeding police orders to leave early Monday.

Alameda County prosecutors did not charge Stierle, and immigration agents enforced a detainer Thursday that they had placed on his case, said sheriff’s Sgt. J.D. Nelson, a spokesman for the jail.

Virginia Kice, a spokeswoman for U.S. Immigration and Customs Enforcement, said Stierle was subsequently released “on his own recognizance pending a hearing before an immigration judge. It will be up to the immigration courts to determine whether he has a legal basis to remain in the United States.”

In a statement his attorney released while he was still in custody, Stierle complained that Oakland leaders were spending money clearing out Occupy encampments while closing five public schools.

“This is the same thing happening across the country,” Stierle said. “We do not have an economic crisis, we have a crisis of priorities. We believe we are the 99 percent facilitating the healing of the 100 percent.”

Friends said Stierle, who has no criminal record, came to the United States six years ago on a student visa to seek a master’s degree in astrophysics at UC Berkeley, but dropped out over concerns about nuclear weapons proliferation.

Stierle works for Free Farm Stand, an urban garden in San Francisco that gives away its produce, and for Karma Kitchen, a weekly brunch in Berkeley where patrons are given free food while being asked to donate toward future meals.