News keeps whooshing by so rapidly that sometimes we may wonder whatever happened to a figure who had his 15 minutes of fame, then sank from view. Obama’s was one such, revealed after a drunk-driving bust last August, after living unlawfully in this country for decades, then gone from the front pages.

The President may hope his pair of lawbreaking alien relatives from Kenya (Onyango plus the well dressed welfare queen Aunt Zeituni who lives off taxpayer benefits) disappear from public attention. They are a reminder of how lawless his administration has been overall, particularly regarding border and immigration enforcement.

Or perhaps Obama likes sticking his thumb in the eye of traditional Americans, whom he has characterized as clinging to guns and religion as well as being “xenophobic” (aka favoring borders and immigration enforcement). He’s the President, and he can have as many illegal alien relatives as he wants, and there’s nothing patriotic Americans can do about it, given the squishiness of many judges.

Anyway, the online celebrity tabloid TMZ has a photo of the Obama uncle, who appears comfortably working at a liquor store despite his illegal status. 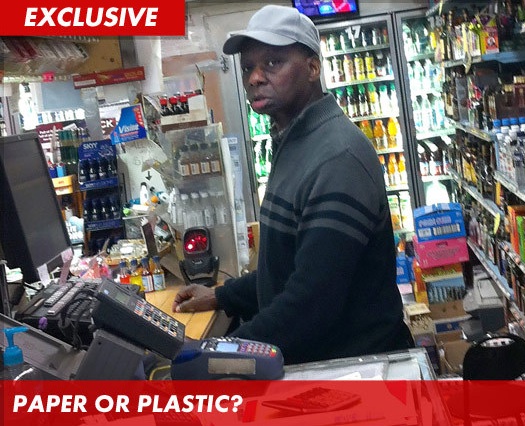 The pictures tell the story … President Obama’s uncle, wheeling and dealing behind a liquor store counter. So there’s no doubt, he’s still dodging the deportation bullet … at least for now.

Onyango Obama was busted for DUI August 24th in Framingham, Massachusetts …after almost smashing into a cop car. Immigration officials learned about the arrest, and then discovered the 67-year-old was in the U.S. illegally. In fact, Onyango was on the receiving end of a 1992 deportation order, but it was never enforced.

While Onyango challenges the deportation order, the pictures show … he’s making a living at the Conti Liquor Store.

He’s due in court tomorrow for a hearing on the DUI charge.