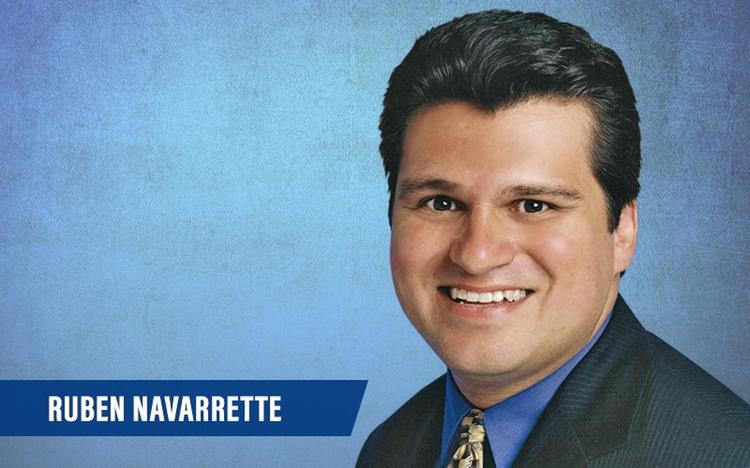 The Fulford File | Neither Dirty Nor A Secret—Professional Hispanic Ruben Navarrette vs. Peter Brimelow On Immigration

What I mean by that is that, while I suppose he’s as competent as the next hack writer at stitching together 800 words for print, calling the occasional source on the phone, and using search engines badly, his real selling point to editors is that he has a Mexican name, and is visibly of Mexican descent (though he describes himself in his biography, A Darker Shade of Crimson,  as a “light-skinned middle class child of progress”).

So he can tell you how American Hispanics feel about immigration enforcement, “racism” against Hispanics, the “Hispanic vote,” and fashionable subjects like that.

(Did I mention that Navarrette is nominally a Republican? You know, like Linda Chavez and Raul Lowery Contreras. His column runs on Townhall.com.)

The way he personally puts this is in his self-promotion blurb is to say that his column provides “new thinking on many of the major issues of the day, especially on thorny questions involving ethnicity and national origin.” 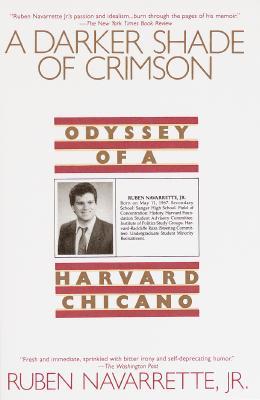 Navarrette’s first book, published when he was 25, and which had, according to promo copy reproduced in Google Books a “25,000 first printing. $25,000 ad/promo” is called A Darker Shade of Crimson: Odyssey of a Harvard Chicano.

The same promo copy says he was “dogged by whispers of affirmative action” at Harvard… and that was before his first book was published at age 25 with a first printing of 25,000 hardcover copies, and God knows what kind of advance. (You can read a review of it by an unimpressed Indian-American university student here.)

The most recent subject of Navarrette’s Professional Hispanic (marca registrada) emoting is Peter Brimelow’s speech at CPAC (or—to be specific, although Navarrette doesn’t seem to realize this) an interview that Peter subsequently gave to CBS. See below.

Naverette’s column was published e.g., in the Modesto Bee, under the heading

It has also been published by the San Diego Union-Tribune as At Least He's Honest, by the San Antonio Express-News under the title Immigration debate clarified by Brimelow, and finally by the Pasadena Star-News as Ruben Navarrette: Brimelow is a bigot,

That seems a little unsubtle, but I supposed they figured that “subtle” would be out of place on a Navarrette column.

“You'll often hear that the immigration debate suffers from a lack of political will. But what it really needs is honesty and clarity.

And so, thank goodness for people like Peter Brimelow. His beliefs are vile, dangerous and antithetical to the greatest traditions of this country. But what is extremely helpful is that he's honest and clear about what he believes.

Brimelow is convinced that — as he recently told a reporter for CBS News — "diversity is weakening American identity." He is not alone. A few years ago, commentator Patrick Buchanan published a book where he argued that the United States was better off when most of the immigrants to its shores came from Europe and not Africa, Asia, and Latin America.

Question: What do immigrants from those parts of the world have in common? Answer: They're not white.

Brimelow shares his beliefs on the website he founded — VDARE.com. The site is named in honor of Virginia Dare, the first child born to English settlers in America before all that dreadful race mixing and diluting of bloodlines occurred. He writes books like his best-seller "Alien Nation: Common Sense About America's Immigration Disaster." And he also gives speeches and appears on panels like the one in which he participated recently at the Conservative Political Action Conference (CPAC) titled: "The Failure of Multiculturalism: How the Pursuit of Diversity Is Weakening the American Identity."

We have words to describe people like this and most of them end in "-ist." Most Americans are not as honest or as clear as Brimelow. They waste a lot of time and effort trying to keep up appearances and pretending to be more progressive and open-minded about immigration than they really are. They'll deny until their last breath that they have anything against immigrants who come to the United States legally from countries like China, Pakistan, India or Brazil. Why, this is a country of immigrants, they'll say. It's only illegal immigration they have a problem with, they'll insist.

That's not true. The three dirty little secrets about the immigration debate are that how Americans feel about immigrants has a lot to do with what country people are coming from, that racism and xenophobia are part of the equation and always have been, and that legal immigrants are as much of a target as their illegal brethren. [More—links lovingly added by VDARE.com]

There’s a website called Cracked.com which specializes in lists of things you “didn’t know,” like “8 Kick-Ass Movies You Didn't Know Were Based on Books.” They would totally go for a list of “Three Dirty Little Secrets About The Immigration Debate”.

However, I mostly find, reading Cracked.com, that they’re things that I did, in fact, know. I admit that this is partly because I know so much—I have a trick memory—and partly because I’m middle-aged.

For example, in the case of the movies-you-didn’t-know-list, I read the David Morell novel that Sylvester Stallone’s First Blood was based on in paperback when it came out in 1972. In the same way, I notice   that Navarrette’s three “secrets” aren’t that secret, and not that dirty either

Well, at the moment,  of them are coming from Mexico, a large, dysfunctional country just south of the American border, where the inhabitants are taught in school that America was stolen from them. (See Allan Wall’s The Education Of A Gringo In Mexico).

Would it be a problem if these people were breathtakingly blonde? Probably—similar migration patterns in Czechoslovakia and Poland caused World War II.

Here Navarrette is not making the argument that America is importing racism, et cetera, from abroad, although it is. Almost all foreign countries are more racist than America, and. of course Mexico, ruled by “light-skinned” people like Navarrette, is the most obvious example, since it’s closest.

But no—he’s making the argument that, since the United States is largely white, any preference for staying largely white is racism.

However, this is not a secret, since professional Hispanics and other immigration enthusiasts are always screaming it at the top of their lungs. In any event, policies about who can immigrate can be legitimately decided on national origin grounds—immigration is not a civil right.

And his final secret is a secret only from immigration enthusiasts:

First of all, I deny that legal immigrants are the “brethren” of illegal ones. You might ask Mexican fruit picker if he feels that Peter Brimelow or Arnold Schwarzenegger is his brother.

But, second, anyway this is not any kind of “secret”— although I remember how freaked out John Podhoretz got when he realized, after years of fighting actual conservatives over amnesty to make illegals legal, that there was an argument for lowering legal immigration as well.

However, it’s always been about the rate of legal immigration.

Finally, Navarrette after abusing anyone who wants to do anything about legal immigration, and complaining that Brimelow, who went to school in Lancashire in the fifties and sixties, missed all the “Nation Of Immigrants” indoctrination that Navarrette, like most Americans, went through in public schools—and this is actually a case where Peter, as an immigrant adds value—starts talking about what Peter actually said at CPAC.

Well, actually, no, he doesn’t. Although the video is on YouTube, and we posted a version on our site, the Harvard-educated Navarrette—not an affirmative action case, he insists—hasn’t actually read it. It was called “Canadian Bilingualism & Multiculturalism as it Relates to America “(Yawn!)” and it was almost entirely about the problems of two groups of white people in Canada.

I would imagine that the people who invite someone like Brimelow to address their group know exactly what to expect, and his remarks to CPAC did not disappoint.

According to CBS News' "Political Hotsheet," Brimelow said during the panel that immigration — both legal and illegal — was, along with multiculturalism, damaging America by creating a "Spanish-speaking underclass parallel to the African-American underclass." He described Hispanic immigrants as "completely dysfunctional" and declared the state of California as "rapidly turning into a Hispanic slum" that is "totally overrun by barrios of illegal immigrants." Anyone else feel like they need a shower? Let me honest and clear. My Mexican-American family has been in the United States for five generations. By comparison, Peter Brimelow has been here for five minutes. No wonder he doesn't understand the first thing about America and the values that make it great.

Once again, Brimelow didn’t say that in the panel. What he said in the panel was about language—not race. What Navarrette is quoting is Immigration speaker sparks controversy at CPAC,  By Leigh Ann Caldwell, February 11, 2012, and it plainly says

In an interview with Hotsheet, [emphasis added] Brimelow, an immigrant from Great Britain, said he's opposed to not only illegal immigration, but legal immigration too. He said it is creating a "Spanish speaking underclass parallel to the African American underclass."

"These are people who are completely dysfunctional. They're on welfare; they're not doing any kind of work - at least not legal work - and their children are having a terrible time. They're dropping out of school; there's an increase in teenage pregnancy," Brimelow said.

All of what Peter Brimelow said is true (see Vdare.com added links above). And Navarrette doesn’t even try to argue against it. He just suggests he feels like he “needs a shower”—which is odd, since he doesn’t live anywhere near the “barrios of illegal immigrants" Peter was talking about.

As for Navarrette’s point about coming from five generations of Mexican-Americans while Peter Brimelow  is an immigrant, the difference is, of course, that Brimelow had to take the Oath of Allegiance—which includes a promise to defend the United States against all enemies “foreign and domestic.”

Not only did Navarrette not have to take that oath, I don’t see how he could. He would appear, based on his attitude to illegal immigration specifically, to be one of those enemies—whether domestic (by nativity) or foreign (by allegiance).

In fact, his Hispanic identity politics could be compared those of the pro-Nazi Sudeten Germans I mentioned above, who lived in what used to be Czechoslovakia before World War II.

When the Nazis invaded, they became what was referred to during the war as “quislings” or collaborators.

Of course, I know it’s unfair to accuse people of acting like Nazi collaborators because they’re betraying their country. But neither Navarrette, nor that other famous Professional Hispanic TM Raoul Lowery Contreras have ever thought it was wrong to level the same kind of accusations against any immigrant restrictionists who are loyal enough to defend it.

The other thing we could say about Professional Hispanics TM is that they’re traitors—in the literal sense that the US is being invaded and they’re cheering it on.

So: Ruben Navarrette Jr.—quisling or traitor?

Really, it’s too close to call.