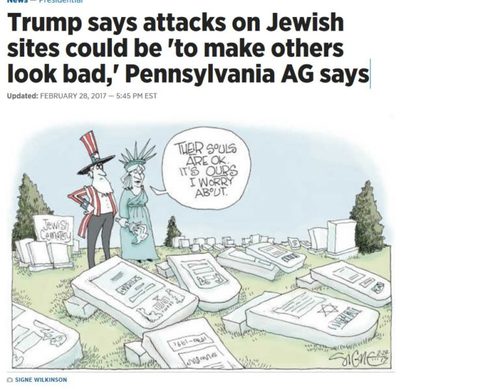 The recent “fake news” about bomb threats at Jewish Community Centers and desecration of Jewish cemeteries recalls a much earlier chapter in the history of Fake News—the Black Church Burnings of the 1990s.

Bomb threats phoned in to Jewish Community Centers across the country caused a spasm of “Trump is not denouncing these fast enough” tweets. At around the same time, there were multiple cases of reported desecration of Jewish cemeteries, including the toppling of tombstones. All this was presumed to be part of an imagined Trump Effect:

Since the election of Donald Trump in November, there have been almost 1,000 reported hate crimes targeting Muslims, Arabs, African-Americans, Latinos and other people of color. At this same moment, there have been terrorist threats against Jewish synagogues and community centers as well as the vandalizing of Jewish cemeteries 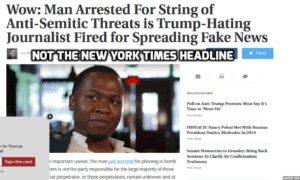 When Trump suggested that some of these might be typical Hate Hoaxes, he was denounced for that, too.

Well, it turned out that many bomb threats could be traced to one black disgruntled reporter (Juan Thompson, right) who was attempting to lay the blame on his white girlfriend.

Then it turned out that in one apparently desecrated Jewish cemetery in Brooklyn, tombstones had been toppled by age, cold, and neglect.[ Senator Chuck Schumer says Jewish cemetery vandalized by anti-Semites, but the NYPD discovered who was really responsible., by Mark Meckler, Patheos,  March 6, 2017]

Toppling monuments to the dead is, of course, despicable. But it also sounds like hard work—work that would be not only difficult, but dangerous in February, especially if undertaken after dark. Possibly all these tombstone topplings were caused by cold and neglect.

The Black Church Burnings in the 90s, which happened mostly in the warmer climate of the American South, weren’t caused by cold—they were mostly caused by blacks.

In 1994 President Clinton nominated [Deval] Patrick to become assistant attorney general for civil rights. They were riveting and edgy times: Conservatives launched attacks against affirmative action; a wave of black church and synagogue burnings erupted in the South, echoes from another era, when burnings and bombings haunted America. The burnings turned out to be the work of drunk boys playing arsonist [in black neighborhoods] and insurance-scam artists [in black congregations]. Still, the probe consumed Patrick and his investigators. "You know how hard it is to solve arsons? Sifting through ash?" Patrick says.

Sure, it’s hard to solve arson crimes, but it’s also not the responsibility of the Assistant Attorney General for Civil Rights. It’s because the national media got on this kick that the Feds got involved.

The incident indeed “brought back memories” for me–memories of the embarrassing 1996 media malpractice of former USA Today reporter Gary Fields, who manufactured a purported epidemic of racist church-burnings in the South with 61 hysterical stories. A typical and familiar headline: “Arson at Black Churches Echoes Bigotry of Past.”  The NAACP jumped onboard and demanded that then-Attorney General Janet Reno investigate. President Clinton fanned the flames; panels were formed; federal spending programs were passed. But a year later, Fields’ own paper was forced to admit that “analysis of the 64 fires since 1995 shows only four can be conclusively shown to be racially motivated.” 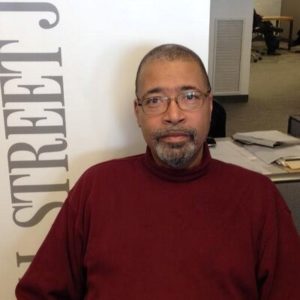 As you see, Michelle blames “former USA TODAY reporter Gary Fields” for pushing the false narrative. Fields (right) who was  at the Wall Street Journal until he took a buyout recently, is a black reporter who spent his career writing about racial issues.

This is something I never picked up on reading Michael Fumento’s coverage of this in the 90s—neither he or Malkin alludes to it, although it’s an obvious source of motivation for this kind of Fake News.

Quantative reporter Fumento is the man who exposed this hoax—you can read eight articles about it on Fumento’s website:

Even after the hoax was debunked, Fields wasn’t fazed—and as you can see, it didn’t ruin his career, because he’s black.

Gary Fields stuck by his story anyway. He "was justifiably proud of the enterprising reporting he did on the church-burning story," according to the Columbia Journalism Review. Asked by the American Journalism Review whether the media overplayed the story "in light of the lack of significant increase in the rate of burnings compared with previous years," Fields was unapologetic. "Who gets to decide what is a normal rate for churches to be burned?" he said. "The one conspiracy there has been is a conspiracy of indifference."

Who was burning down black churches? Steve Sailer explained in a 2013 post about the Knockout Game (a trend the Main Stream Media strenuously denied):

white-racists-are-burning-down-black-churches-in-Alabama quasi-hoax that was a huge respectable story in the 1990s? (What happened then was this: there are a lot of churches in America, many of them closed most of the week, more than a few of them more or less abandoned. And every year hundreds of churches across the country catch fire, more than a few due to arson. Whether this arson is for more for functional reasons [e.g., nobody around most of the time], or because churches attract firebugs for psychological reasons [flames of hell?], or because some financially failing ministers unleash a little Protestant Lightning to collect fire insurance, is unknown. What happened was that the national media started paying selective attention to black churches being subject to arson, and soon we had a national crisis on our hands.

Steve ‘s expression “Protestant lightning” is switch on the older expression “Jewish lightning” referring to insurance fraud.  This expression, is of course, Deplorable, although the people who made the joke that ends in the punchline “How do you make a flood?”  were not members of the Klan, but Jewish comedians. 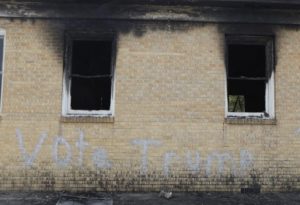 Nevertheless, in the age of Trump, it happened again—five days before election day: Black church torched in Mississippi, with ‘Vote Trump’ painted on wall, By Cleve R. Wootson Jr. November 3, 2016.

In December—Trump having been elected anyway, in spite of all the Fake News, Steve Sailer blogged that this story contained

And then Steve linked to the Mississippi Clarion-Ledger story  Member of black Mississippi church arrested for arson by Sarah Fowler , December 21, 2016, with its picture of accused arsonist (and member of the congregation) Andrew McClinton, 45. 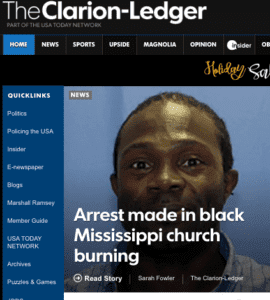 We call this Narrative Collapse, but as proof that Fake News never dies, the story A Black Church Burned in the Name of Trump, by Emma Green, November 2, 2016, is still up on the Atlantic’s website, with no apology, and only the note that

The Clarion-Ledger in Mississippi reports that police arrested Andrew McClinton, reportedly a member of Hopewell Missionary Baptist Church, for setting the fire that gutted the church and painting the words “Vote Trump” on the outside wall in the week before the election. He has been charged with one count of arson in the first degree. Police have not reported any motive for the crime so far. [December 21, 2016]

Emphases added. No mention of the race of the alleged arsonist—and no apology from the Atlantic, anymore than there was from USA Today.

The good news is that now the internet can defeat Fake News—Trump was elected anyway.