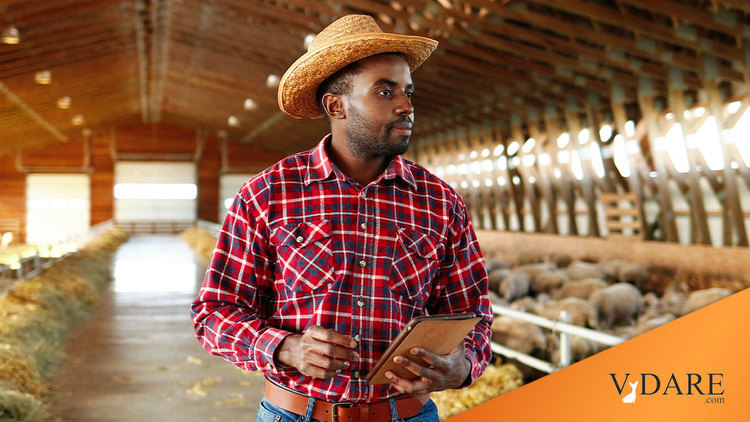 In his acceptance speech at the 2008 Democratic National Convention, Barack Obama pledged “higher standards” and “more accountability” from government programs. He claimed that he would “go through the federal budget, line by line, eliminating programs that no longer work and making the ones we do need work better and cost less.”

But Obama’s rhetoric defies his record. The capstone of Obama’s wasteful track record: his sponsorship, along with Senators Kennedy, Biden and Grassley, of a provision in the recently-enacted $290 billion farm bill which subsidizes thousands of unproven discrimination claims on the part of “black farmers.”

That the “black farmers’ discrimination” shakedown—a 1999 “settlement” reached under Clinton-appointed Secretary of Agriculture Dan Glickman between USDA and black “farmers”—is a colossal fraud has been documented by the Government Accountability Office (GAO). In July 2007, the GAO released a report accusing USDA of paying $1.1 billion in farm payments to more than 172,800 dead people between 1999 and 2005. [Deceased Farmers Got USDA Payments, By Sarah Cohen, Washington Post, July 23, 2007] Self-serving politicians immediately pretended to be scandalized by such waste and abuse, and vowed to hold hearings and get to the bottom of this “incompetence.”

However, during that same six-year period, a USDA settlement with “black farmers” paid out nearly $1 billion to just over 15,000 people—most of whom had no connection with agriculture and had never applied for assistance from the department. Several years ago, one politician asked the GAO to investigate this paradox—but quickly pulled back that request for fear of the fraud that the watchdog agency might find. Not one politician supposedly outraged by payments to dead people has expressed the slightest concern about even more massive payments to those highly dubious claimants in the settlement that was supposed to resolve the Pigford v. Glickman, now known as Pigford v. Johanns lawsuit.

The Department of Justice has documented the existence of at least two organized fraud rings that stole untold amounts through the settlement, although it jailed only a token three individuals who readily entered into plea bargains and declined to prosecute the rest. Federal prosecutors have convicted and accepted plea bargains from four individuals for one of at least two savage murders resulting from a falling out among those thieves. (See my previous VDARE.com column.)

Now that the last few dollars are finally being squeezed out of that 1999 agreement, it is time once again for mostly white taxpayers to pony up additional billions for the very same accusations that were resolved for all time through the settlement…allegedly.

Obama’s tucked-away language, deep within the bowels of this year’s 670-page Farm Bill, would give 71,700 additional “black farmer” claims already ruled out of order by the court yet another chance to be adjudicated. (All too typical of legislation, the provision is poorly written and the actual number is uncertain.) The $100 million line-item provision in the farm bill Congress “effectively reopened the government’s discrimination settlement with black farmers”, according to the Capitol Hill newspaper Roll Call. [Sowing Seeds of Victory By Anna Palmer, Roll Call, July 7, 2008 Subscriber link | Free PDF]

And this probably isn’t the end of the story. If these claims are settled along previous lines, taxpayers will likely fork over as much as $4 billion or more to discrimination-claim entrepreneurs in perhaps the most massive act of de facto “reparations” approved (yet) by America’s increasingly mau-maued political class.

Leading the lobbying campaign through the halls of Congress : black activist John Boyd, Jr., founder and president of the National Black Farmers Association (NBFA). Boyd, in an interview with Roll Call, argued: “It’s going to take billions of dollars, not $100 million, to settle with the farmers,” Boyd said. “But I had to take that deal to keep the lawsuit open.”

Since forming the NBFA and acquiring the “Dr.” title—which he uses in the media and on his website (blackfarmers.org), but never explains—Boyd has attempted to establish himself as a “national civil rights advocate.” He appears to have patterned his operation after Jesse Jackson’s shakedowns of deep-pocketed corporations, using his status as NBFA head to attack as unfair to black farmers Wal-Mart, Wachovia Bank, Circuit City, Monsanto, and other large companies. On his website, Boyd also congratulates himself for meeting with Fidel Castro and supposedly brokering a “20,000,000 million dollar trade agreement” to sell black farmers’ produce to Cuba.

But it’s not just blacks and Democrats. Sen. Charles Grassley (R-Iowa) has praised the recent payout of what Human Events has dubbed (May 2, 2008) “Farmer Reparations“:

“Claimants did not need to prove that they ever actually farmed—or ever applied for a loan, only that they ‘attempted to farm’ explains USDA’s General Counsel Marc Kesselman. “

This past August, six law firms filed class-action suits, which now represent some 18,000 black farmer “clients.” Former Clinton Secretary of Agriculture Mike Espy is working in conjunction with a black farmers’ advocacy group, the Black Farmers and Agriculturist Association, to “represent those farmers who were denied justice by having their claims rejected in the previous litigation.”

Jet magazine recently reported NBFA’s Boyd as saying that the reason why thousands of blacks failed to file discrimination claims within the timeframe established under the terms of the original settlement is because “[a] lot of these farmers are illiterate and don’t understand how to proceed in this situation.” [July 21, 2008]

The unceasing agitation of those who failed to get a piece of this corrupt pie, the endless one-sided coverage by the media, the obsession of the racially segregated Congressional Black Caucus (which does not allow whites to join), the gutlessness of Republicans and the eagerness of white politicians of both parties to grovel for black votes and avoid charges of “racism” have all combined to create a perfect legislative storm.

This case is already replete with instance after instance of centuries of jurisprudence being turned on its head solely for the benefit of disgruntled black “farmers,” who, as the judge in the case once noted, have virtually no chance of winning under the same rules that all the rest of America is subject to in court. The whole wretched affair, detailed in my book, Harvest of Lies: The Black Farmer Lawsuit Against the U.S. Department of Agriculture  (Representative Government Press, 2004) has gone from farce to tragedy—not just for America’s taxpayers, but for the nation’s legal system, which politicians like Obama, Kennedy, Grassley and Biden are perverting in a manner worthy of Zimbabwe dictator Robert Mugabe‘s lapdog tribunals.

Now, for the first time in the history of the United States, the new legislation would have Congress intervene in a private civil lawsuit by setting aside a federal judge’s deadline for inclusion in the settlement and granting 71,700 supposed black “farmers” who missed that deadline a third opportunity to sue the government over the same tired claims. Of all the millions who have attempted to participate in class-action suits, only these privileged black “farmer” plaintiffs would be allowed to ignore a federal judge’s legitimate order with impunity. USDA alone, of all the uncounted thousands of class action defendants, would be denied the benefit of the bargain it made to resolve all claims and put the matter to rest forever by settling the lawsuit.

The fact is that the vast majority of those 71,700 latecomers are not farmers, and most have no direct ties to farming. Indeed, many are located in highly urbanized areas where farms are only a vague memory. In the original suit, large numbers of people living in big-city housing projects—and in prisons—were signed up to collect the no-questions-asked $50,000 payments.

The Census of Agriculture for 1997 found only 18,451 black farmers in the U.S. (leading the agitators of this “stealth” reparations movement to wail inconsolably to the press at that time about the coming “extinction” of black farmers). Some 22,483 supposed “black farmers” did have their claims reviewed in the settlement, and 15,127 of them have received payments. Now, with no shame or acknowledged irony whatsoever, these same agitators are demanding money for the additional 71,700 black “farmers” who missed the judge’s settlement deadline.

To lawlessness, the “Black Farmer” racketeers add repression. Within days of the passage of H.R. 2419, the legislative chair of the National Association of Credit Specialists (a USDA-sanctioned employee group within the USDA’s Farm Service Agency which unquestionably has official permission to use the government e-mail system) sent an electronic message to members about the black “farmer” language in the bill. It urged them to contact their senators “and work hard to get it stopped.”

Boyd ally Kenneth Cook, president of the Environmental Working Group, which viciously maligned USDA in a 2005 report that grossly mischaracterized the original settlement, immediately launched an attack on NACS. He accused the organization of using the official federal e-mail system for illegal lobbying, focusing particularly on one female USDA employee who forwarded the original message. Barack Obama condemned this so-called lobbying, wondering “whether the Department is capable even now of providing black farmers—and all farmers—with fair and equal access to USDA loans and services.”

Predictably, press coverage of the e-mail flap is totally one-sided, especially since officials of USDA and FSA are too fearful to comment. Particularly disturbing was an August 8 Associated Press story by Larry O’Dell [Agency warns against e-mail against black farmers’ settlement, August 8, 2007]. O’Dell (email him) carefully quoted from the e-mail to make it sound like a racial statement—and omitted portions of the message that made it clear the organization’s objection was based on the amount of work the legislation would cause for its members—not the dubious nature of the black “farmers” and their claims.

Washington Post columnist Robert Samuelson recently noted that the presidential aspirants should be leading an honest discussion over the role of the government: “What should it do, for whom and why? What can we afford? Who should pay?”

Samuelson further noted: “Government programs that have outlived their usefulness or are wasteful should end: farm subsidies and Amtrak, for instance.”[The Rise Of Fantasy Politics, August 27, 2008]

But with the added element of race-based racketeering—especially if directed from the White House—these government subsidies will be even further entrenched.