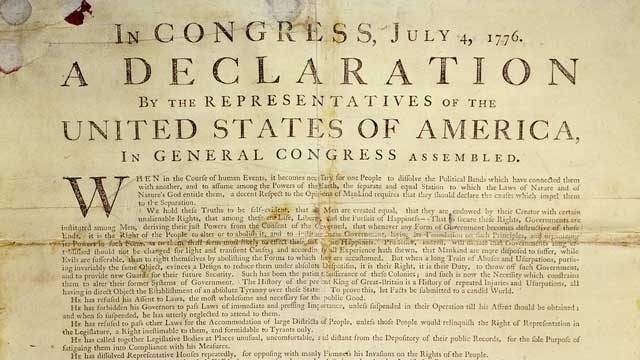 That's from a website called Infowars.com and refers to  September 16, the  anniversary of Mexico's independence from Spain.  (Cinco de Mayo is something else, it celebrates Mexico's victory over some foreign invaders, always a good thing to celebrate. ) Gray Davis, former, repeat former, Governor of California was proud to participate in a Mexican Independence Day parade  just before being thrown out of office.

The Fourth Of July is also the occasion of mass swearing-in ceremonies for legal immigrants, as in this 2004 story: DHS: USCIS to Welcome 16,000 New Citizens During 4th of July Celebrations.

But for an example of modern multiculturalism, in which the Fourth Of July has noting to do with the Founding Fathers, this New York Times article takes the red, white, and blue cake:

"On March 25, Astoria was aflutter with blue and white flags, commemorating the 185th anniversary of the beginning of the Greek war of independence from the Ottoman Empire. The next day, Bangladeshi immigrants from Woodside to Bayside marked Bangladesh's secession from Pakistan. And on May 5, Mexicans across the borough loudly celebrated a national holiday that has come to eclipse the country's actual Independence Day of Sept. 16. …

"Not long ago, two flags hung side by side outside Mr. Ramdayal's house on 128th Street. But recently the Guyanese flag fell and he carried it inside, leaving only the American flag. Mr. Ramdayal said he was not sure if he would re-hang the flag from Guyana, whose independence he recalled being won when he was 9. [VDARE.COM note: Correct—Guyana is the country formerly known as British Guiana. It was granted its independence in 1966.]

"'We had a good celebration and enjoyed it at first, but then the politics came in,' he said. 'It was a disaster.'" [VDARE.COM note: Correct again. Guyana, once it was abandoned by the British Colonial Office, had to deal with the following demographics—"Ethnic groups:  East Indian 50%, black 36%, Amerindian 7%, white, Chinese, and mixed 7%— Religions: Christian 50%, Hindu 35%, Muslim 10%, other 5%." This is not a recipe for peace, and the factions started rioting even before independence.] Crime was high in Guyana, he said, and he appreciated the sense of security in the United States."

Immigrants do not come to the United States because it's a "Nation Of Immigrants". They come because it's a nation of Americans. They like the peace, and the low crime rate.

Everything you've heard from gun control advocates about America having a high crime rate has always been by comparison with "other industrialized countries" i.e. Europe, the Anglosphere, and Japan. Places like Guatemala, Mexico, all of Africa, and the Middle East are usually worse.

In the past, people coming to America were declaring their independence of their native lands. They were abandoning the old, and embracing the new. But in Queens, New York and in colonias throughout the American Southwest, they're bringing their countries with them.

The New York Times' enthusiastic Queens story is a symptom of "Post-Americanism"—the belief that the old America is over, and the modern American must adapt to a polyglot, polynational, community coming and living in his home.

And that means that there won't be an America for people to move to.

If you were a Salvadoran gangster, trying to escape the Salvadoran gang lifestyle, you wouldn't be able to "declare your independence" from MS-13 by coming to America, because MS-13 is almost everywhere in America where immigrants are.

My humble suggestion: Americans should declare their independence of the various nations of the world who are clamoring at the gates to get in.  Immigration is not a civil right. (Ask anybody overseas, and they'll tell you.)

There are five billion potential immigrants for America to declare its independence from. And the Fourth Of July is a good day to do it.

The day after the Declaration of Independence was proclaimed, John Adams said this:

"The fourth of July, 1776, will be a memorable epoch in the history of America. I am apt to believe it will be celebrated by succeeding generations, as the great anniversary festival. It ought to be commemorated as the day of deliverance by solemn acts of devotion to Almighty God. It ought to be solemnized with pomp, shows, games, sports, guns, bells, bonfires, and illuminations this from one end of the continent to the other, from this time forward forever."

The late Robert A. Heinlein, whose centenary is on July 7, had a small brass cannon that he'd fire off (carefully) on the Fourth of July.

We wish all of VDARE.com's readers a noisy Independence Day.