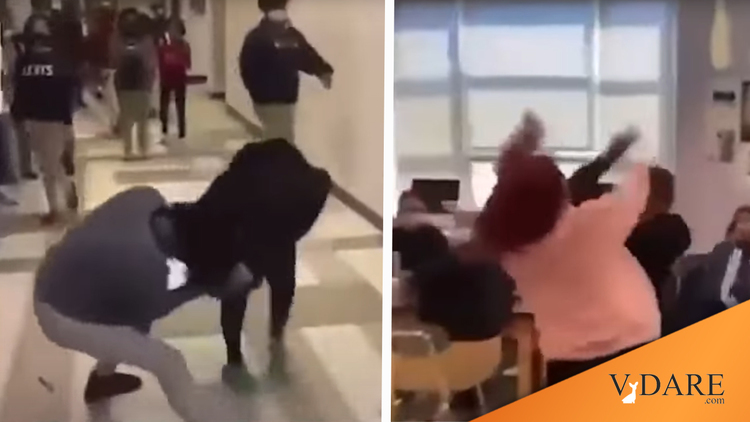 I was interested to see on Amren.com a link to this headline:

The disparities are in school discipline, by the way, not test scores. And I thought "Well, of course!"

It's obvious that African Americans, who have fantastically high crime rates as adults, will have very high rates of misbehavior in school, much higher than their white counterparts.

I also thought that it was an unusually brave thing for a "GOP Official" to say. But it turns out that the "GOP official" is Hugh McInnish, [Send him (supportive) email] who has written for VDARE.com. So that explains the "unusually brave" part.

McInnish's letter, which you can read in HTML at Amren.com, or at Scribd.com in its original format, had been written, in his capacity as a private citizen, in response to an official Department Of Justice letter to the Huntsville (AL) Board of Education [PDF] which had said things like "predominantly black schools have too few advanced courses" and "black children at predominantly white schools are punished and suspended at alarming rates".

This is an official action of your federal government (at the moment, Barack Obama and Eric Holder's federal government). On a regular basis, it complains of "racism" as evidenced by numeric differences in test scores, arrest rates, speeding tickets, or in this case school discipline. (See my article Disparate Impact: Legal And Political.)

But the matter is being taken seriously by locals, as it should be, since the Huntsville school system has been under federal control for the last forty-one years. This Department Of Justice letter is in response to a request from the school board that is already four years old:

"The letter was sent to school board attorney J.R. Brooks, who in December 2007 had mailed four boxes of system data to Washington. That submission marked the first step in the lengthy process of coming out from under the 1970 court order that ended a dual school system based on race.[I. E. Segregation]

"While the response, coming years later, did not expressly deny the system unitary status, it gave eight pages of examples why school officials should not anticipate that change anytime soon."

McInnish wrote this letter and held a press conference, as a private citizen, to point out some of obvious facts. I say as a private citizen, because, although he's on the county and state Republican executive committees, he's not speaking for them. As he told the newspaper some of them will be "aghast" at hearing about this.

Which is too bad—this kind of thing gets votes.

"McInnish went so far as to include in his letter a chart that purports to show the 'black crime rate as (a) multiple of (the) white crime rate.' The chart indicates that black people commit more than six times the violent crime of white people overall; it has them committing about eight times as many murders as white people and more than 14 times as many robberies.

"The data he uses, however, comes from New Century Foundation, an organization that the Southern Poverty Law Center cites as playing a leading role in the world of 'academic racism.'"

[Republican leader says 'unfairness' of life is cause of racial disparities in Huntsville schools, By Crystal Bonvillian, The Huntsville Times, March 2, 2011]

And the data the New Century Foundation uses comes entirely from the FBI figures—and from, I suppose, the unfairness of life. [Color Of Crime, PDF]

It does not come from your daily newspaper.

Your daily newspaper will try to deny or suppress such facts.

But this assumption that higher discipline rates for African-Americans must mean prejudice is part of a larger picture. It's all through the legal system, as I mentioned above.

For example, there have been attempts to prove that police stop black drivers for "driving while black" because the police suspect black drivers of being criminals due to the higher crime rate. These studies assume that African-American drivers aren't speeding any more than whites.

This assumption is obviously flawed—if African-Americans are committing crime at a higher rate, they should also be speeding at higher rate.

In 2003, I pointed out that "a survey by the State of New Jersey on the relationship between race and speeding produced a very interesting statistic: black drivers speed twice as much as white drivers!"

It's the same with test scores—testing companies spend millions of dollars—taxpayer dollars—trying to find a written test that blacks will pass at the same rate as whites. They can't.

As I wrote in 2007, the message of disparate impact theory is that "if minorities fail tests at a higher rate than whites, it's the test that's wrong."

The alternative theory—that there might be something wrong with minorities—seems to be unthinkable. And if minorities don't get any of the blame, who does? You and me, that's who.

"[B]y constantly blaming whites for the failures and shortcomings of nonwhites, our society is, despite I think the best intentions, teaching nonwhites to hate whites. After all, we are constantly telling blacks that it's those racist bankers who won't give you loans, it's those racist policemen who arrest you despite your innocence, it's those racist teachers who expect you to fail…" [Contemporary voices of white nationalism in America

Which is too bad for minorities, as well as for whites. A lack of discipline in schools hurts the academic careers of minorities more than it does those of white kids.

There are white kids with problems similar to those of minorities—relatives in jail, alcoholism, street fighting, low-wage employment, bad white neighborhoods, and so on.

You can find kids like that in the East End of London, the South End of Boston, and on the Jersey Shore.

We know that those kids, if they grow up to be successful in life, do so as a result of finding discipline in their lives, either in school or in the Armed Forces. Why can't liberals get it that the same thing applies to minorities?

Or are they more interested in blaming than helping?

Congratulations to Hugh McInnish for pointing these "Hate Facts" out. No doubt there will continue to be complaints about him having done it, but all publicity is good publicity. Well, almost all publicity.