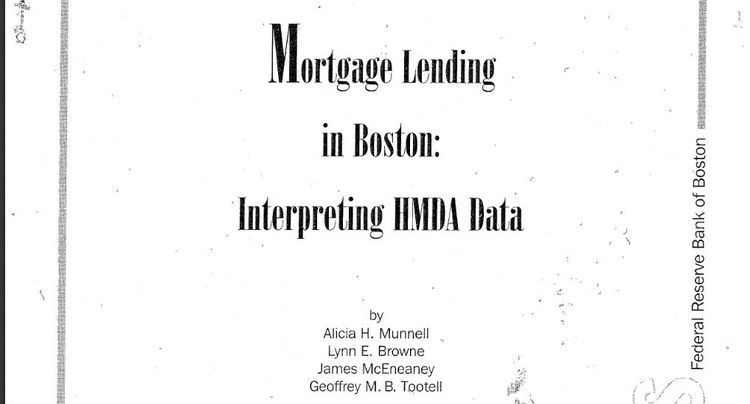 Media hoopla to the contrary, the evidence suggests that banks are color-blind when it comes to mortgage lending.

"Definitive—changes the landscape." --Office of the Comptroller of the Currency.

These ecstatic press notices greeted the Boston Fed's recent study claiming to prove racial bias in mortgage lending—the social problem of the season, with coverage in the Wall Street Journal (five stories in eight weeks), regulatory rumbles from the Federal Reserve, legislative leers from Congress. The pressure is on mortgage lenders to change credit standards for minorities.

But the study's analysis makes an elementary error about a crucial question: minority default rates. Queried by Forbes, Alicia H. Munnell, Boston Fed senior vice president and research director, conceded that the study's handling of default rates was "definitely not an adequate look at all."

Minority mortgage applicants do tend to be rejected more than whites. A Federal Reserve Board survey of 6.6 million home mortgage applications in 1991 showed that 37.6% of black applicants and 26.6% of Hispanics were denied home loans, compared with only 17.3% of whites. This finding held across all income levels. But was the difference the result of racism? Or of an objective, color-blind application of sound credit standards? The data on default suggest the latter is true. Mortgage lenders consider a range of criteria going far beyond income, such as net worth, age, education, probability of unemployment and credit history. Minorities frequently fare worse by such measures. Perhaps that's because society gives them fewer opportunities. But mortgage lenders would still be objective, not prejudiced, in rejecting them. The Boston Fed study did correct for standard credit criteria, based on a sample of Boston-area mortgage applications. It found that these criteria did explain about two-thirds of the difference between white and black/Hispanic rejection rates. But even after this correction, minorities seem to be rejected at a rate of 17%, as opposed to only 11% for whites. This difference, the Boston Fed claimed, must be caused by racism. . [Mortgage lending in Boston: Interpreting HMDA data (Working Paper 92-7)]

Oh, yeah? But what about those default rates?

"We were aware that people say, 'Oh, this may be rational discrimination, because minorities default more,'" the Boston Fed's Munnell told Forbes. But her study sample was too recent to check default rates directly. Instead, the Boston Fed compared default rates across census tracts. "And what we found was, there was no relationship between the racial composition of the tract and the default rate. So it wasn't true that tracts with large minority populations had higher default rates." Think about this carefully. The Boston Fed authors apparently assumed that equal default rates meant all minority applications are an equal credit risk compared with whites. But they're wrong. These census tract mortgages had already passed through the loan approval process-which had presumably rejected a higher proportion of minority applicants on the way. So the fact that white and minority default rates finished up equal meant mortgage lenders knew what they were doing.

The market, in short, worked. The mortgage lenders somehow weeded out the extra credit risks among minorities, down to the, point where white and minority defaults were at an equal, apparently acceptable, rate.

"[That] is a sophisticated point," says Munnell, questioned by Forbes. She agrees that discrimination against blacks should show up in lower, not equal, default rates—discrimination would mean that good black applicants are being unfairly rejected. "You need that as a confirming piece of evidence. And we don't have it."

Forbes: Did you ever ask the question that if defaults appear to be more or less the same among blacks and whites, that points to mortgage lenders making rational decisions?

Munnell does not want to repudiate her study. She tells Forbes, on reflection, that the census data are not good enough and could be "massaged" further: "I do believe that discrimination occurs."

Forbes: You have no evidence?

Munnell: I do not have evidence.... No one has evidence.

But if there is racial discrimination in lending, it means that mortgage lenders forgo profitable business because they are prejudiced. That's unlikely on the face of it and becomes more unlikely when one notices that Asian-American applicants are actually turned down less often (15% in the Fed survey) than whites. Moreover, logically, it could be precisely those institutions marketing most vigorously to minorities that generate the most marginal applications—and therefore the highest rejection rates.

The Boston Fed study itself noted that denied minority applications on average had "poorer objective qualifications," suggesting "a systematic bias in mortgage lending is very difficult to document. . . ."

But in today's climate, any statistical disparity is viewed as discrimination—and an excuse for more social engineering.

[James Fulford writes: After this was published, George Galster of the Urban Institute wrote an attempt at rebuttal: The Facts of Lending Discrimination Cannot Be Argued Away by Examining Default Rates, arguing that because minorities as a class are poorer, and live in worse neighborhoods, "In a world devoid of lending discrimination, therefore, minority mortgage holders as a group will tend to have higher default rates than the pool of white mortgage holders."

This kind of thinking may be "good enough for government work," college admissions, or civil service promotions. But you can't expect banks to act that way. They're using their own money, and must lend to people who can pay it back.

Raphael Bostic wrote The Role of Race in Mortgage Lending: Revisiting the Boston Fed Study in 1997, which he said "Thus, the claim that non-economic discrimination is a general phenomenon is refuted. Further, I can say little regarding the existence of discrimination among 'marginal' applicants. To conclude that such discrimination exists, one must prove that the observed differences are not due to economic factors."]

Article
The Democrats’ RED DAWN: Yes, It’s A Communist Coup. But There Are Signs Of Hope
MORE...
POPULAR TAGS