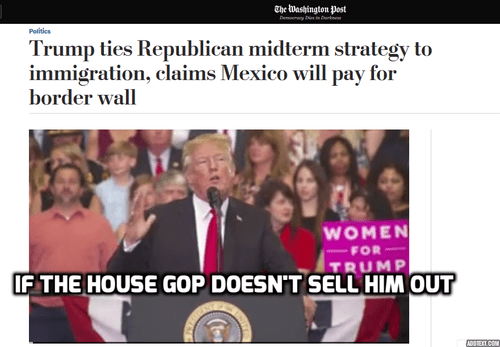 See earlier: Denham vs. Goodlatte On Immigration Bill: Is The GOP A Suicide Pact? 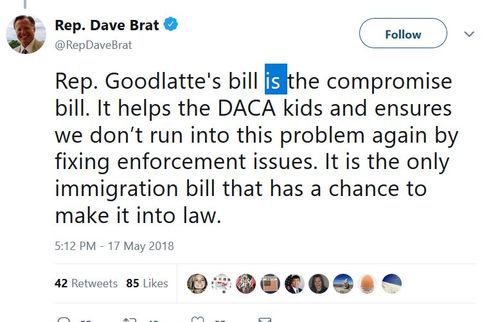 President Trump has apparently taken our advice and placed the immigration issue at the forefront of the upcoming midterms battle, hammering the Democrats at his exuberant rally in Nashville, TN. [Trump tests midterm message on immigration, MS-13 ‘animals’ during Tenn. Rally, by Jessica Taylor, NPR, May 29, 2018] Trump even resurrected his old chestnut about Mexico paying for the wall. [Trump ties Republican midterm strategy to immigration, claims Mexico will pay for border wall, by Seung Min Kim and Anne Geran, Washington Post, May 30, 2018]Yet the party he ostensibly leads is still sliding closer to a disastrous vote on DACA, via a “discharge” petition that will allow a vote on Amnesty. Indeed, it’s not impossible the Democrats could get what they want: a “narrow” vote on DACA alone, meaning they give nothing in return. The obvious answer: Trump should demand “narrow” votes on key parts of the immigration patriot agenda.

Rep. Kevin McCarthy, who wants to succeed Paul Ryan as Speaker, says the GOP is “very close to having an agreement” on immigration that “deals with the DACA situation” and provides “border security” [Kevin McCarthy: GOP ‘Very Close’ to Immigration Deal, by Neil Munro, Breitbart, May 30, 2018]. Even more alarmingly, Rep. Mark Meadows, Chairman of the (generally immigration patriot) Freedom Caucus, has indicated that he might be open to ultimate citizenship for DACA recipients—a serious weakening of the Goodlatte bill currently supported by the Freedom Caucus. As Rep. Dave Brat has pointed out, the Goodlatte bill is already a compromise. Richard Viguerie’s ConservativeHQ site reports House Republicans are meeting next Thursday, June 7, and speculates that Paul Ryan plans to push through his own version of Amnesty. [One Week To Stop Establishment GOP Amnesty Bill, May 31, 2018]

McCarthy’s weasel words are a call to arms for immigration patriots. As veterans of these conflicts know, money for “border security” without enforcing existing laws is simply boob-bait for naïve Republican voters, a trick that goes back to Ronald Reagan’s 1986 Amnesty. Other examples: George W. Bush’s “Secure Fence Act”; the promises of “security” that accompanied Ted Kennedy and John McCain’s Amnesty bills.

It’s therefore extremely ominous those who are pushing DACA legalization are using the same kind of rhetoric. “It’s my belief that we need a narrow bill with a permanent fix for DREAMers and border security,” Jeff Denham, a California Republican who is a leader of this effort, has been quoted as saying  [Republican moderates are close to forcing an immigration fight in the House, by Tara Goloshan and Ella Nilsen, Vox, May 29, 2018]. Denham even trying to use Trump as cover: “The president continues to tweet every other day, that we need border security. There is no reason we can’t have an agreement on both border security and a permanent fix for Dreamers” [The major immigration battle brewing in the House, by Susan Ferrechio, The Washington Examiner, May 17, 2018]

Congressman Tom Reed, another “moderate” i.e. wimp pushing for a vote on DACA, also is trying to pair his support for Amnesty with rhetoric about increased border security. [Reed among GOP moderates pushing for Dreamers vote, by Rick Miller, The Salamanca Press, May 30, 2018]

Yet “border security” is meaningless without internal enforcement. A wall is a powerful symbol, but switching off the jobs magnet is ultimately more important. The best way to do this: E-Verify.

Republicans could just as easily have a “narrow vote” on E-verify, just like the Democrats want on DACA.  But there doesn’t seem to be a push for a national mandate from the Republican leadership.

Why not? This was best explained in a recent letter to the Washington Post. One Al Sanchez blasted Republicans for failing to back E-Verify because “enforcing this law would alienate a great deal of the traditional Republican constituents [presumably employers benefiting from cheap labor]” [E-Verify exposes the hypocrisy of the GOP, May 29].

Indeed, only last month Steve King charged the GOP leadership quashed his push to impose mandatory E-Verify and increase the costs of illegal immigration for employers. [Exclusive—Rep. Steve King: GOP Leadership Blocked My E-Verify Improvement Proposal, by Robert Kraychik, Breitbart, April 7, 2018]  As columnist Tracy Jan recently noted in the Washington Post, despite E-Verify’s popularity, Republican lawmakers refuse to push for a national mandate, with Senators such as Ron Johnson and the appalling Thom Tillis citing a “labor shortage” or a “worker shortage” . [What happened to E-Verify—the government’s popular way to curb illegal immigration, Daily Herald, May 27, 2018]

This is politically insane, as well as socially sadistic. Even Mitt Romney, hardly a profile in courage, is campaigning for E-Verify, to the fury of the Main Stream Media. [Mitt Romney is not joining the resistance, by McKay Coppins, The Atlantic, March 27, 2018]  Mitt Romney began his Senate campaign in Utah by calling for more immigration. However, now facing a stiff primary challenge, Romney is defending E-Verify—and even his 2012 comments on “self-deportation.”

When challenged by his opponent in a recent debate. Romney said “self-deportation” simply meant businesses would be held punished for hiring illegals, whom would then leave once the job market dries up [Republicans Kennedy, Romney square off in Senate primary debate, by Sahalie Donaldson, The Daily Universe, May 30, 2018]

In other words, Mitt Romney is doing more to propose practical solutions to illegal immigration than the Republican Congress.

Another good candidate for a “Narrow vote:” establishing English as the official language of the United States. A lawyer in New York City recently had his life destroyed when he was caught on video complaining about restaurant workers about speaking Spanish. Harmeet Kaur at CNN was among those who snarkily declared “nothing in the Constitution or any federal law supports his comment that ‘they should be speaking English’ because ‘this is America’”. [FYI: English isn’t the official language of the United States, May 20, 2018] Yet it is politically popular to say it should be in federal law, or even in the Constitution, with over 80 percent supporting official English in a recent poll. Still, no action from Congress.

A final candidate for a “narrow vote”:  a remittance tax. President Trump’s promise at the rally in Nashville to have Mexico pay for the wall, a line that’s beginning to ring hollow as he nears the midway point of his first term, led to the usual angry retorts from Mexican politicians, gleefully supported by our own country’s anti-American MSM [Mexico’s president fires back at Trump: We will never pay for your wall, by Luis Sanchez, The Hill, May 29, 2018]

Yet all President Trump would have to do is introduce a remittance tax, and the opinion of the Mexican government would be irrelevant. Daniel Sobieski at the American Thinker argues a remittance tax would not only provide enough money to pay for the wall but could set up a compensation fund for victims of illegal alien crime.[Tax remittances can build the wall, May 5, 2018]  Perhaps more importantly, it would strengthen the White House for any upcoming immigration negotiations— “funding for border security” would be taken care of.

Of course, this presupposes the Republican congressional leadership, and indeed the White House staff, see their opponents as the Democrats, rather than the president. After all, President Trump has surrounded himself with “moderates.” His key figure for staffing personnel slots, Johnny DeStefano, is a former longtime aide to John Boehner [Even in Trump’s White House, being nice can pay off, by Nancy Cook, Politico, May 25, 2018]. His Director of Legislative Affairs is Marc Short, a former Koch Brothers operative and Trump opponent during the campaign. Trump can’t even count on his Secretary of Homeland Security, Kirstjen Nielson, who has publicly dismissed Trump’s border wall promise in favor of “technology.”

While surrounding himself with these foes and carrying out their agenda, President Trump is instead attacking Attorney General Jeff Sessions, perhaps the one Cabinet secretary who has any real connection to the movement that put him in the White House.

President Trump is still making big promises to the American people. But both he and the Republican Congress are ignoring effective and popular policy proposals just before a midterm election. Instead, they seem determined to rip themselves apart in pointless infighting—or, worse, enact a key part of the Treason Lobby’s agenda. The end result: America’s last best chance for patriotic immigration reform could be lost.

It’s time for immigration patriots to speak up and remind the president and Congress who put them there.

After this long in office, it’s time for results—and if the GOP and President Trump listen to immigration patriots, they might just get to stay in office too.