To borrow from federal Judge Kurt Engelhardt, it was liars convicting liars, all over again. Well, in a multicultural society, that’s increasingly what you get. Plus incompetent Affirmative Action police work—and a Politically Correct criminal justice system too easily manipulated by Social Justice Warriors.  Bottom line: the man who, I am morally certain, murdered Chandra Levy in 2001 is to be freed.

What was once a slam-dunk case, is apparently now no case at all. Ingmar Guandique’s murder conviction has been thrown out, the planned re-trial has been nixed, and instead of spending most of his life in prison, he has been handed over to immigration authorities, who will deport the illegal alien back to his native El Salvador [Ingmar Guandique released into custody of immigration officials, by Keith L. Alexander, Washington Post, August 1, 2016).

Maybe. If recent federal history is any indication, and Salvadoran authorities refuse to take Guandique, he will be released back onto our streets.

Citing the “interests of justice” and “recent unforeseen developments that were investigated over the past week,” the U.S. attorney’s office for the District of Columbia said that Guandique would now be turned over to immigration authorities for deportation proceedings….

There is no “mystery” to “deepen.”

The day that Chandra Levy disappeared, April 30 or May 1, 2001, Ingmar Guandique did not show up for work, and his face was scratched, “battered and bruised”. [CHAPR SIX: The Predator in the Park by Sari Horwitz, Scott Higham and Sylvia Moreno, Washington Post, July 18, 2008]

However, at the time, police had neither Levy nor Guandique.

Her skull and some scattered bones were not found until May 22, 2002, by a civilian dog as he and his master searched for turtles, lying unhidden on the ground in a part of DC’s Rock Creek Park that police had overlooked when they’d supposedly searched it in May 2001, allegedly with cadaver-sniffing dogs. Levy had looked the area up on her computer the day of her disappearance.

By then, it was impossible to determine the cause of death, or find any DNA evidence that would implicate a killer. Incredibly, private investigators hired by Levy’s family later found a shinbone that the DC police had still managed to overlook [Chandra Levy's Remains Found in Park By Dog by Steve Twomey and Sari Horwitz, Washington Post, May 23, 2002.] 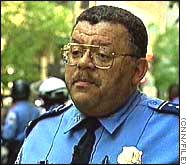 When Levy’s remains were found, then DC Metropolitan Police Department Chief of Police Charles Ramsey (pictured right) suggested that she’d been murdered somewhere else, and her corpse transported to the park, after his incompetent men had searched the area. And when police learned of Guandique, one year later, Chief Ramsey and his Number Two man, Terrance W. Gainer, mocked the notion that he might be the perpetrator and actually urged reporters towards Levy’s married lover, then-Congressman Gary Condit (D.-CA) [Even after Ingmar Guandique's conviction, the Chandra Levy saga is all about Gary Condit by Scott Higham and Sari Horwitz, Washington Post, November 28, 2010.]

Ramsey and Gainer may now claim vindication; they must not be allowed to.

Note that Guandique had already pleaded guilty to a May 7, 2001 burglary, and also to attacking Halle Shilling in Rock Creek Park on May 14, 2001, and Christy Wiegand there on July 1, 2001. In the Wiegand case, he was convicted of “kidnapping while armed .” Both victims had reported that he used a knife, told them to be quiet, and acted less like the robber he claimed to be to police, and more like a rapist and/or murderer [ Chandra Levy Update: Two Survivors of Similar Attacks Testify Against Murder Defendant Ingmar Guandique, By Naimah Jabali-Nash, CBS News, October 26, 2010]

Had those strong, athletic women, both of whom were taller than the 5’8” Guandique, not fought free and screamed for help, while running away, Guandique would surely have raped and/or murdered them.

The presiding judge in the Wiegand case considered Guandique a very dangerous individual.

“Having found by a substantial probability that the defendant committed a crime of violence while on release pending sentencing following a guilty plea to Second Degree Burglary in F-2793-01, the Court finds and holds that there is a rebuttable presumption that no condition or combination of conditions of release will reasonably assure the safety of any other person and the community…”

However, all that Guandique got for three serious felonies was 10 years in stir with his MS-13 friends.

It wasn’t until 2010, almost eight years after Levy’s remains were found, that a jury convicted Guandique.

But now, we are to act as if the conviction of Ingmar Guandique was all a miscarriage of justice.

Why is it that America’s lawyers give million-dollar quality defenses of the most cut-throat, colored criminals? The District of Columbia Public Defender’s Service , perhaps out of racial solidarity and despite its limited resources, pulled out all the stops in defending Guandique. (My guess: it also had help from Social justice Warriors at Leftist law firms). Its attorneys pursued a two-pronged strategy:

It was garbage, but cunning garbage.

Defense counsel sought to impeach the testimony of the original trial’s chief prosecution witness. Their Plan B: again pointing at former Congressman Condit.

The star witness for the prosecution: Armando Morales.

Morales, a Fresno gang leader and jailhouse snitch with a previous relationship to the Levy prosecutors, had been Guandique’s cellmate in 2006. In 2009, Morales told the prosecutors that Guandique had confessed to him. According to Michael Doyle in Miami Herald, cited above:

“He said, ‘Homeboy, I killed that bitch, but I didn’t rape her,’ ” Morales testified.

Morales also said Guandique told him that he hadn’t meant to kill Levy but that she died in a robbery gone bad. No eyewitness or DNA evidence connected Guandique to Levy, making the Morales testimony all the more crucial.”

Guandique’s defense counsel determined that Morales had perjured himself in the Guandique trial, not over Guandique but by testifying that he had never previously served as a police informant. They then maintained that therefore the jailhouse snitch lacked credibility. Surprise, surprise.

The lawyers also found two other women who reported having had affairs with Condit prior to Chandra Levy, and who claimed that the Congressman was fond of tying up women as part of bondage sexcapades, pointing to the “jogging tights tied in knots” found near Levy’s bones. [Gary Condit rough-sex reputation shocks mom of slain D.C. intern Chandra Levy — but she still wants to find truth about daughter, by Nancy Dillon, NY Daily News, May 20, 2016

(Note, however, that the previous purported lovers did not accuse Condit of violence, and that his trysts were all indoors.)

The late Sam Francis had already responded to “Plan B” in 2002 with characteristic acerbity:

The “someone” [suspected] on everyone's lips, of course, is her alleged one-time lover, Rep. Gary Condit.

Personally I find that explanation silly. I have never met Mr. Condit, but I do like to think I know something about the American political class of which he seems to be a fairly representative member, and I find it all but impossible to believe that anyone in that class has the strength of character to commit this kind of murder.

These people can pinch their secretary's bottoms all day and pocket bribes from whatever crook happens to walk through the front doors of their offices, but it takes a certain amount of character or what Machiavelli called “spine,” guts, whatever you want to name it—to kill someone face to face, clean up the evidence, and then dispose of the body so it won't be found.

In Renaissance Italy political leaders possessed such qualities; ours don’t.

My hunch: the prosecutors don’t want to risk Armando Morales being torn apart under cross-examination by defense counsel. At best, not only would the Guandique prosecution fall apart, but also the others in which Morales was an informant. (Note: these do not include the other crimes of which Guandique has been convicted). At worst, it could make the prosecutors look like co-conspirators.

Too late. My guess: the intrepid defenders of colored cut-throats smell blood, and they will pursue the prosecutors to the ends of the Earth.

But there’s a further point. As my friend and partner-in-crime, David in TN, wrote me:

The reason for today's denouement is the failure of the stupid DC police to find the body at the time, despite an “exhaustive search.”…

Found earlier, there would probably have been DNA evidence identifying the killer.

The already awful DC police went on an Affirmative Action binge in the late 1980s and early 1990s, hiring illiterates and criminals, and gutting its police academy training, putting rookies on the street with as little as 322 hours of training—as opposed to neighboring counties, whose better-vetted officers received 700-900 hours of academy training [Standards Eased in Rush to Expand Force, By Keith A. Harriston and Mary Pat Flaherty, Washington Post, August 29, 1994]

Indeed, some shocking reports have been made about the importance of cognitive skills. Expressing concerns about the poor English skills of new police recruits, a Washington Post editorial [1993] claimed that “between 1986 and 1990, 311 of the 938 murder cases the D.C. police brought to the U.S. attorney’s office—roughly a third—were dismissed…. One local prosecutor says many D.C. cases were thrown out because prosecutors couldn’t read or understand the arrest reports [written by the police].”

In a footnote, Lott adds:

‘The Washington Post editorial [D.C.’s Finest, at Their Worst; by Tucker Carlson, Washington Post, January 17, 1993] went on to claim that: “Of the murder suspects who are indicted, many end up being acquitted because of weak cases prepared by police. Washington’s Pretrial Services Agency reports that only 44 percent of the murder cases led in 1990 and closed by the first part of 1992 resulted in convictions.’”

This pattern has been developing for a long time. Back in 1983, in his book The List , about the Atlanta Child Murders , Chet Dettlinger reported on how negligent black, Fulton County PD crime scene investigators were. (Journalism like that I’ve cited by Dettlinger, and the Post no longer sees the light of day.)

Meanwhile, we are inundated with millions of legal and illegal alien cut-throats, to supplement our homegrown killers.

Don’t be surprised if, a year or two down the road, white girls start turning up dead again—and we learn that Ingmar Guandique is back on American soil, nearby.

As Michelle Malkin says, “It ain’t over, ‘til the alien wins.”