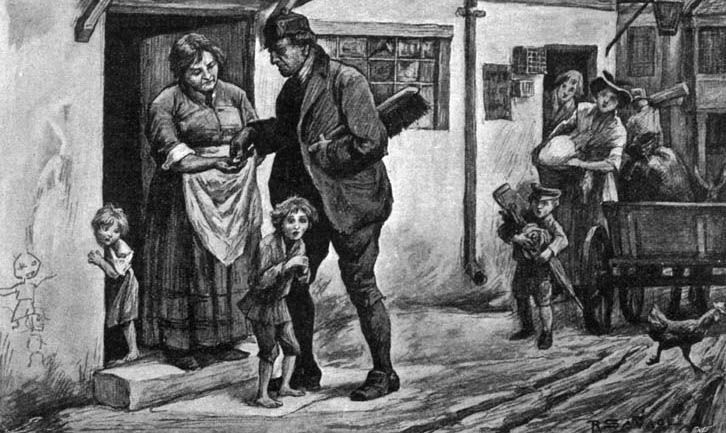 The Axis Of Amnesty's Ideology Of Cheap Labor

During an early Senate debate over the guest worker program in the Kennedy-Bush-McCain Axis of Amnesty bill, ABC News reported:

"Sen. Ted Kennedy, D-Mass., took the Senate floor in opposition to his Democratic colleague and, red-faced and gesticulating toward [Sen. Byron] Dorgan, defended the guest worker program, yelling, 'The idea that you can have a secure border and close it completely is something that has never happened before and will not happen now'. … The Senate's 'liberal lion' continued to howl at Dorgan, demanding, 'I would like the chicken pluckers to pay $10.15 — or $15 an hour. They don't do it, and they're not going to do it. Who's the — who are you trying to kid?'"[By Jake Tapper and Z. Byron Wolf, May 22, 2007, via Mickey Kaus]

"Let me stand up and say a word on behalf of chicken pluckers. They'll never get $15 an hour as long as we bring in cheap labor through the back door to pluck chickens."

While Sen. Dorgan might have economic logic and simple logical coherence on his side, Sen. Kennedy's sputtering is characteristic of elite opinion in the 21st Century. Even "liberal lions" have internalized the reigning cheap labor ideology—the new Iron Law of Wages that assumes that the American economy requires an ever-expanding supply of poorly-paid imported chicken pluckers.

In this mindset, America is always about to run out of some badly paid but strangely crucial set of workers unless we can get more immigrants. Last year, for instance, it wasn't chicken pluckers the New York Times was worried we didn't have enough off, it was pear pickers.

Of course, nobody ever mentions the Econ 101 alternative of raising pay until supply equals demand.

Senator Kennedy is echoing, oddly enough, the fatalistic conventional wisdom of Dickensian England—the doctrinaire assumption that cheap labor is essential, and that the inexorable grinding of the dismal laws of economic science determine wages as immutably as the orbit of Mercury is fixed by Newton's Law of Gravity.

The main difference: while Sen. Kennedy assumes the need for unskilled immigrant workers, the early Victorians were convinced of the necessity of uneducated child laborers.

We don't think of the British as being terribly ideological. But during the second quarter of the 19th Century, their justifiable national pride in developing economics for once overwhelmed the vaunted British common sense. A dogma based on a crude interpretation of the works of Malthus and Ricardo presumed that low wages were crucial to profits, just like the sophomoric economics of today's open borders crowd.

Back then, the ruling class didn't fulminate over plucking chickens but over sweeping chimneys.

Consider the fates of the little boys, from age four on up, who were widely employed by master chimney sweeps to clamber up inside long flues and knock down the soot, at horrific cost to their health. Paul Johnson writes in A History of the English People

(p.285), "often they were forced up by the use of long pricks, and by applying wisps of flaming straw to their feet. They suffered from a variety of occupational diseases and many died from suffocation."

The ruling ideology of the age assumed that, as regrettable as this might be, the laws of economics required it.

After all, how else would chimneys ever get swept?

The first bill banning the employment of children under eight from chimney sweeping passed Parliament in 1788. But, like many immigration laws in America today, it was ignored. So was the 1834 act.

Then, the greatest reformer of the Victorian Era, Anthony Ashley Cooper, the seventh Earl of Shaftesbury, began his almost endless crusade to abolish child labor inside chimneys. Like William Wilberforce, the victor over the slave trade, Shaftesbury was a Tory, an evangelical Anglican, and a relentless parliamentarian.

In 1840, Shaftesbury carried a bill to regulate child chimney sweeps over " resistance that can only be called fanatical", in Johnson's words.

It also was not enforced.

Three more of Shaftesbury's bills failed in Parliament in the 1850s. He succeeded in 1864, but the legislation proved ineffective "due to a general conspiracy of local authorities, magistrates, police, judges, juries, and the public to frustrate the law. Boys continued to die…" including a seven-year-old who suffocated in a flue in 1873.

And, of course, that winter everyone in Britain froze to death due to clogged chimneys.

Oh, wait … sorry, that was in Bizarro Britain, where the reigning interpretations of economics actually applied. Rather like in Senator Kennedy's Abnormal America, where nobody will be able to afford to eat chicken without the Liberal Lion's amnesty and guest worker programs.

In the real Britain, however, the master chimney sweeps quickly found other ways to clean chimneys.

And, equally, Americans will not starve if they are deprived a continuous influx of uneducated foreigners.

What we've learned since the early Victorian Era is that the world works in ways more responsive to intelligent effort than was imagined by Thomas Malthus:

In contrast to Dickensian England, with its Scrooge-like obsession with cheap labor, Americans traditionally enjoyed high wages because the country was underpopulated relative to its natural resources. This inspired American entrepreneurs to invest in labor-saving innovations, which, in a virtuous cycle, allowed even higher wages to be paid.

The most famous example: Henry Ford doubling his workers' salaries in 1914 after inventing the moving assembly line.

In the long run, the cheap labor obsession debilitated the English economy. After the brilliant innovations of the early Industrial Revolution, the English textile industry tended to stagnate. Paul Johnson explains:

"Factories paid higher wages than domestic industries; all the same, they were very low, chiefly because most of the factory hands were women and children. Low wages kept home consumer demand down; worse still, they removed the chief incentive to replace primitive machinery by the systematic adoption of new technology."

And then there was the long run impact on Britain's economic culture:

"State limitations of human exploitation came too late, and were too ineffective, to make the quest for productivity a virtue; the English did not discover it until the twentieth century, by which time the trade union movement had constructed powerful defenses against it."

Victorian Scroogeonomics helped engender its own nemesis. It drove the British working class far to the left of the American working class, leading to both the nationalization of major industries in the 1940s and a hatred of productivity improvements among unions, exemplified in the 1959 Peter Sellers' movie I'm All Right, Jack. The effects on the U.K. economy were disastrous. As late as the mid-1980s, Margaret Thatcher had to fight a fierce battle for control of the economy against the Stalinist boss of the large coal miner's union, Arthur Scargill.

It wasn't surprising that the decisive battle between Thatcherism and the left came in the mines. In the U.S. a century ago, miners' strikes featured extraordinary levels of violence on both sides. Going underground together bonds miners like soldiers going into battle together, providing their unions with more solidarity. Mining was always radicalizing because working conditions were so harsh, as Ali G ( Borat creator Sacha Baron Cohen's first character) realized during a visit to a Welsh coal mine:

Ali G: Check dis. I is now in a coal mine which is where the Wales people used to live, underground. Millions of years ago miners lived under here before they became human beings.

Ali G: They worked in 'ere? What a crap job.

In the U.S., however, miners became less and less a force for radicalism as the success of John L. Lewis, boss of the United Mine Workers of America 1920-1960, at winning higher pay lowered both their leftism and their numbers.

Lewis acknowledged that he was driving miners' wages up so high that his union would be much smaller in the next generation. But if his members were paid enough today, they could afford to educate their kids to do something less miserable with their lives by the time the bosses had figured out how to do without them.

The often-brutal saga of mining in America has thus had a happy ending that would have astonished and frustrated Joe Hill. Today, mining is a small, reasonably well-paid profession. [VDARE.com note: Of course, modern mine owners have started talking   about the American work ethic, and trying to import miners from the Ukraine.]

Of course, technological improvements tend to eliminate uncomplicated jobs. That means that what a healthy economy really needs is not unskilled immigrants but a work force with improving human capital. Yet that's exactly what we're not getting by importing so many of Sen. Kennedy's chicken pluckers to keep down the chicken plucking wage.

As the great management guru Peter Drucker pointed out in 2004:

"But the immigrants have a mismatch of skills: They are qualified for yesterday's jobs, which are the kinds of jobs that are going away."