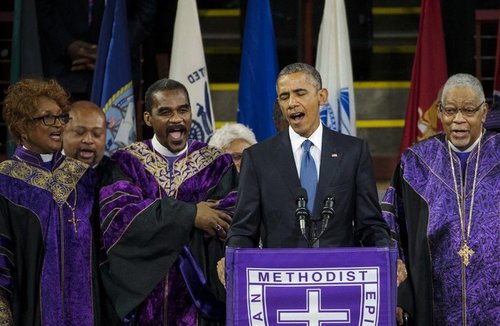 That Obama Eulogy: Fuel On The Flames, While Leftists Cheer—And Conservatism Inc. Cowers

According to the Guardian, a “full-throated progressive firebrand has reemerged, reminiscent of the Barack Obama of 2008 who wowed the country during his first presidential campaign” was “on display at the funeral of Reverend

Pinckney, one of nine victims of the Charleston church shooting.” [Obama triumphant? President turns gaze to progress on guns, race and votes, By Ed Pilkington, June 29, 2015] POLITICO’s Edward-Isaac Dovere said the President was “reborn” with his eulogy June 28, 2015). MSNBC’s Chris Matthews did not quite repeat his famous remark about a “thrill going up his leg,” he called it a “rousing, forceful eulogy.” After previously criticizing Obama’s failure to lead on race relations, he said the President has grabbed “the lead and lead from the front.”[Hardball, June 29, 2015] His MSNBC Colleague Rachel Maddow was more emphatic, gushing that it was “one of the more remarkable public statements ever uttered by our president, Barack Obama, and one of the most remarkable public statements by any American president on any subject ever.” [Rachel Maddow Show, June 26, 2015]

Obama’s speech, I mean eulogy—and the reaction to it—was certainly more remarkable than any of Obama’s previous speeches, but not for the reason Maddow thinks. Before dissecting it, I want to take a detour down Memory Lane for some perspective.

On July 27, 2004, a hitherto unknown candidate for the US Senate in Illinois gave a lofty speech at the Democratic Convention where he declared: “There's not a black America and white America and Latino America and Asian America; there's the United States of America.” Over the next four years as he advanced from State Senator to US Senator to President of the United States, Barack Obama presented himself as a new black leader. With his biracial background and colorblind rhetoric, Obama was said to “transcend” race. (But let the record show that the late Sam Francis was skeptical, writing “The use of such a dual role is that it allows Mr. Obama to reject racial identity for whites while at the same time legitimizing it for non-whites. That, after all, is what the ‘multiracialism’ of which he is supposed to be the latest and best symbol really means.”)

After being forced to confront the anti-white rantings of his mentor Jeremiah Wright, Obama gave his famous “A More Perfect Union” speech [March 18, 2008] where he bemoaned the fact that black “anger is exploited by politicians, to gin up votes along racial lines, or to make up for a politician's own failings.”

While he still criticized Talk Radio hosts for opposing Affirmative Action and Immigration, he acknowledged that it was unfair to criticize whites as “prejudiced” for “their fears about crime in urban neighborhoods.”

Obama scored a perfect NAACP scorecard as Senator, but his rhetoric gave him a different, post-racial image. And after Obama’s election, many Americans thought our problem with race was over. In November of 2008, 75% of all Americans thought his election was "the most important" or "one of the two or three most important" advances for blacks in the last century. Even 61% of McCain voters agreed. 67% though that problems with race relations would eventually be sorted out. 70% thought that race relations would improve because of Obama’s election. [Americans See Obama Election as Race Relations Milestone |High optimism about the future of race relations, by Frank Newport, Gallup, November 7, 2008] Shortly before Obama’s inauguration, only 22% of whites and 44% of blacks believed that racism was a large societal problem, down from 52% of whites and 70% of blacks a decade earlier. [Far Fewer Consider Racism Big Problem, By Michael A. Fletcher and Jon Cohen, Washington Post, January 19, 2009]

There were even studies purporting to find an “Obama effect” where his election raised blacks’ self-esteem and their test scores.

But Obama dashed the hopes of whites who thought his election would bring racial harmony very quickly. In 2009, he said Cambridge police officer James Crowley “acted stupidly” for arresting black Harvard professor Henry Louis Gates, and also that the arrest should be viewed in light of the “long history in this country of African Americans and Latinos being stopped by law enforcement disproportionately.” Whites overwhelmingly opposed Obama’s statement. After his “Beer Summit” with Crowley and Gates, Obama’s M.O. on race relations was to largely stay quiet, while letting Eric Holder and other lesser bureaucrats in his administration enact anti-white policies.

Nevertheless, whenever Obama has opened his mouth about race, as when he made his "If I had a son, he'd look like Trayvon," comment in 2012, white Americans got angry. By the end of 2014, only 10% of all Americans and even fewer blacks believed race relations had improved under Obama. [10% Think Race Relations Better Since Obama Elected, Rasmussen, August 29, 2013] And the number of Americans who viewed racism or race relations as the greatest problem facing our country jumped from just 1% when Obama was elected to 13%. [Rasmussen Daily Presidential Tracking Poll, June 30, 2015]

It was against this backdrop the Dylann Roof committed his murder and Obama gave his Eulogy. [Full text | Video]

In some superficial respects, Obama’s words were reminiscent of the old Hope And Change candidate of 2007 and 2008. In fact, he opened his eulogy noting “The Bible calls us to hope.” He acknowledged that not everyone who disagrees with him is evil, noting "people of goodwill will continue to debate the merits of various policies, as our democracy requires... there are good people on both sides of these debates." He spoke of “A More Perfect Union” and repeated his maxim that slavery was our nation’s “original sin.”

Yet the similarities end there. The most remarkable aspect of this speech was how religious it was. Obama used the word ‘faith’ 10 times, ‘God’ 17, and ‘grace’ 35. And while he generally avoided discussing Christ or Christianity, he made some strong religious pronouncements. In fact, he claimed that Roof’s massacre was evidence that “God works in mysterious ways"—Roof “didn’t know he was being used by God” because he didn’t anticipate that the shooting would lead to “a thoughtful introspection and self-examination that we so rarely see in public life.”

The MSM fixated on Obama singing Amazing Grace at the end of the speech, but he spoke the words earlier. After reciting the words “was blind but now I see,” Obama spoke of how we were “blind to the pain that the Confederate flag stirred,” and so “by taking down that flag, we express God’s grace.”

The president then continued to discuss how God’s grace demands that “we're guarding against not just racial slurs, but we're also guarding against the subtle impulse to call Johnny back for a job interview but not Jamal,” that “we search our hearts when we consider laws to make it harder for some of our fellow citizens to vote,” we make sure that our law enforcement “system is not infected with bias,” and that we stop being “blind to the unique mayhem that gun violence inflicts upon this nation.”

Thus the President literally argued that God “used” a homicidal racist to kill nine for the greater purpose of forcing Republican politicians to have “thoughtful introspection and self-examination” and collectively take off the blindfolds that prevent us from realizing that the Confederate flag, voter ID Laws, etc. are racist.

Note that, in contrast, when Republican Senate candidate Richard Mourdock said “that even when life begins in that horrible situation of rape, that it is something that God intended to happen,” [GOP's Mourdock says rape, abortion comments 'twisted', Indianapolis Star, October 24, 2012] the MSM forced every Republican across the country to disavow him.

That the President made these statements the same day he illuminated the White House with rainbow lights to celebrate the Supreme Court’s imposition of gay marriage on America tells us a great deal about Christianity in Obama’s America. But don’t expect smug atheists like Bill Maher to mock him.

One must also wonder how, when the MSM, politicians, academia, and corporate America all drone on incessantly about racism, how anyone can be “blind” to the problems to which Obama claims God’s grace has suddenly opened our eyes. In fact, Obama even conceded that “we talk a lot about race” and “we don’t need more talk.” Yet moments later, he contradicted himself by noting the greatest imperative is that we don’t “slip into a comfortable silence again” and “avoid uncomfortable truths about the prejudice that still infects our society.”

In his old speeches Obama spoke of shared responsibility for whites and blacks to both make concessions. Even after the Trayvon Martin verdict, he acknowledged blacks were disproportionately the “perpetrators of violence.”[Remarks by the President on Trayvon Martin, July 19, 2013]

But in this speech, Obama made no calls for blacks to adjust their behavior, expectations, or beliefs in the spirit of compromise and taking responsibility for their own lives. In fact his only concession to white Americans was to use the possessive pronouns when criticizing them. Thus Obama, who has always opposed the Confederate Flag and supported gun control, so “we” were not blind to these issues. And while Obama conceded his white opponents may be “good people” with “good will,” he went on “racial bias can infect us even when we don't realize it.”

President Obama’s more temperate statements about Trayvon Martin or Henry Louis Gates met with conservative outrage. But virtually no conservatives have criticized Obama’s speech. I searched The Blaze, National Review, The Federalist, Breitbart, Daily Caller, Weekly Standard, Town Hall, and Human Events looking for discussion of the Eulogy, and found nothing other than matter of fact reporting. The only conservative criticism I found: a short item on Twitchy.com objecting to his promoting gun control—with no mention of the racial angle [‘I thought this was a eulogy': Obama uses Clementa Pinckney funeral to push — you guessed it! — gun control, June 26, 2015]

Somehow, I do not think this is what Obama meant when he said we must guard against “silence.”

Yet truly ending this silence and discussing “uncomfortable truths” is probably the most important thing we can do to improve race relations. However, these uncomfortable truths are not about the “prejudice that still infects our society,” but that racial disparities exist and are not caused by racism.

Obama said “None of us can or should expect a transformation in race relations overnight.” Yet Americans, black and white, believed that voting for him would do just that.

When black test scores remained low and blacks realized that Obama in the White House would not solve their problems, they became angry and—encouraged by the MSM—blamed white racism. When the MSM created a phony narrative about white-on-black crime, Dylann Roof became radicalized because his elementary internet research revealed this to be a lie.

Demanding that “we” confront our subconscious prejudices would not have stopped Dylann Roof from committing his heinous crimes. His prejudices were quite conscious.

But by refusing to confront genuinely uncomfortable truths, President Obama, his MSM allies, and their Conservatism Inc. sock-puppet opposition, will create more lone wolves like him.