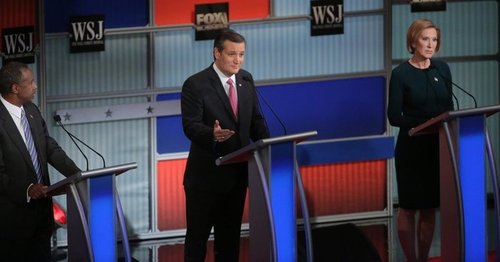 No one ever doubted that Sen. Ted Cruz (R.—TX) is a skilled debater. And at the Fox Business Debate, Cruz hit a home run, by tying immigration to wages and speaking out against the Main Stream Media double standard, even though he qualified his strong statements with characteristic platitudes about legal immigration. But more important, though less noted: Cruz is apparently reversing his past support for H-1Bs—which may suggest he is turning against massive legal immigration generally. As I’ve asked before this in election season: Is the dam bursting?

At the debate, “Money Honey” Maria Bartiromo asked Donald Trump about the economic aspects of illegal immigration and the logistics of mass deportation. Trump responded solidly. He did not talk about wages or welfare, but just reinforced his usual rhetoric about his Wall and bravely noted how Eisenhower successfully evicted more than a million illegal immigrants.

Jeb Bush and John Kasich responded with the incredulity typical of people who depend on the MSM. Kasich whined: "Think about the families. Think about the children"—and said Trump wasn't making "an adult argument." Bush ludicrously claimed suggest that merely discussing immigration, beyond calling for Amnesty, will keep the GOP from winning the presidency:

Even having this conversation sends a powerful signal—they're doing high-fives in the Clinton campaign right now when they hear this. That's the problem with this. We have to win the presidency.

Although Ted Cruz was not directly part of this exchange, he clearly knows how powerful the immigration issue is. Asked about entitlements, he brushed the question aside and said: “I want to go back to the discussion we had a minute ago because, you know, what was said was right. The Democrats are laughing — because if Republicans join Democrats as the party of Amnesty, we will lose.”

Cruz, who has been campaigning against the MSM, also managed to tie the immigration issue back to economics.

And, you know, I understand that when the Main Stream Media covers immigration, it doesn't often see it as an economic issue. But, I can tell you for millions—of Americans at home watching this, it is a very personal economic issue. And, I will say the politics of it will be very, very different if a bunch of lawyers or bankers were crossing the Rio Grande.

Or if a bunch of people with journalism degrees were coming over and driving down the wages in the press.

Then, we would see stories about the economic calamity that is befalling our nation. And, I will say for those of us who believe people ought to come to this country legally, and we should enforce the law, we're tired of being told it's anti-immigrant. It's offensive.

Technically, white journalists seem quite happy to allow Hispanics and illegal aliens to take their jobs—see the effusive coverage of Jose Antonio Vargas, and the general trend of news organizations to hire Hispanics and Asians to cover the immigration beat. Similarly, as VDARE.com has reported, many corporate law firms have advocated allowing illegal aliens into the profession.

Nonetheless, Cruz was making a powerful rhetorical point that humorously underscored how the America Ruling Class supports mass immigration, while the working and middle class bear the brunt of its effects.

Cruz then reverted to more typical Legal, Si, Illegal No canards, albeit with an interesting and welcome comparison of U.S. policy to that of the rest of the world:

I am the son of an immigrant who came legally from Cuba...to seek the American dream. And, we can embrace legal immigration while believing in the rule of law — and I would note, try going illegally to another country. Try going to China, or Japan. Try going to Mexico. See what they do. Every sovereign nation secures its borders, and it is not compassionate to say we're not going to enforce the laws......And we're going to drive down the wages for millions of hardworking men and women. That is abandoning the working…

It was gratifying to see Cruz make such powerful and effective comments on the effect of illegal immigration on wages. But he ignores the fact that legal immigrants have the exact same effect.

When pressed, his spokesman merely said “He has some definitive thoughts on how the legal immigration process is supposed to work” and claimed it was impossible to know whether we need more legal immigrants until the illegal problem was solved [Is Ted Cruz shifting right on immigration to match Donald Trump?, By David Drucker, Washington Examiner, August 21, 2015]

When Scott Walker (remember him?) first indicated he would consider reducing legal immigration to address wages, Cruz said: “I think it is a mistake for any politician to on the one hand embrace amnesty, embrace a pathway to citizenship for those who are here illegally, and on the other hand seek to restrict or punish legal immigrant” [Ted Cruz knocks Scott Walker's immigration position, by David M. Drucker, Washington Examiner, April 24, 2015]

And during the 2013 Amnesty wars, Cruz voted against a Jeff Sessions amendment to limit legal immigration, proclaiming he was "a full-throated advocate of legal immigration" and "we need to be a nation that doesn't just welcome, but celebrates legal immigration" [Sessions' Amendments Fail at Senate Judiciary, by Jerry Kammer, Center for Immigration Studies, May 14, 2013].

In contrast to Sessions, Cruz introduced an amendment to quintuple the number of H-1Bs from 65,000 to 325,000 a year [Where Donald Trump and Ted Cruz Completely Disagree on Immigration, by Sahili Kapur, Bloomberg, August 20, 2015]

Cruz doubled down on his support for H-1Bs in July, telling Laura Ingraham

They’re creating jobs there, and their companies are competing with us and taking jobs away from us. I don’t think that makes any sense. So, I’ve introduced legislation to increase the number of H-1B visas, if there are people who are educated and talented and creating jobs, the data shows for every H-1B visa holder that comes in, he or she creates 1.7 jobs for Americans here. I want job creations, I want innovators, I want new opportunities for America.

But in a little noticed interview on November 5, Ted Cruz appeared to be willing to shift his position on H-1Bs. Cruz said he was "working with my colleagues in the Senate on introducing a package of legislation on reforms to the H-1B program."

He said that the program

was designed to bring in engineers and computer scientists who could generate jobs and add to our economic growth, and if companies are abusing it and laying off American workers they need to be investigated, they need to be audited, and if they broke the law then they need to be prosecuted."

So what should we make of Cruz’s recent statements?

Of course, we must welcome any candidate who will speak out against mass immigration, both legal and illegal. And Cruz certainly deserves praise for his strong comments on the effect of immigration and wages. If he does end up reversing path on legal immigration, he deserves even more credit—and, conceivably, will be rewarded with the Presidency.

But it is Donald Trump ultimately deserves the credit—for shifting the debate to where politicians like Cruz are forced to support immigration patriotism.