("Talpra Magyar!" means  "On your feet, Magyar!" which is what Hungarians call themselves, and is the first line of their "National Song", below.)

There have been many attempted invasions of Europe by barbarian hordes. Each one has brought forth heroes to lead the fight for civilization.

The Spartans held the pass at Thermopylae. Aetius fought the Huns to a standstill at Châlons (although to judge from the character sketch in Gibbon, Aetius might just as happily have fought on the other side, if the price was right). Charles Martel stopped the Muslims at Tours, and John Sobieski turned them back from the gates of Vienna.

So far as I can observe, today's Europe doesn't have champions of that caliber. They do, though, have Hungary.

Hungary's current Prime Minister, Viktor Orbán, is a loud and unapologetic voice for his nation's identity, and Europe's, and for protecting those identities by refusing to go along with the opening of Europe to millions of illegal aliens from Africa and the Middle East.

Orbán's views of course drive the mandarins of the European Union crazy.

It's gotten so bad that we are now hearing the first calls for Hungary to be thrown out of the EU. Recently, Prime Minister Orbán made a speech in which he said:

If Europe wants the best for itself … it should be able to rule the Mediterranean, and — as the old Roman emperors did — sink the empty, unauthorised ships.

I don't quite get that reference to the Roman Emperors. From what I know of Roman attitudes and methods, they would not likely have bothered to check that the boats were empty before sinking them. And to judge from the comment threads to European news websites, that Roman spirit is far from dead.

Leaving that aside, Orbán gave a good vigorous speech, in strong opposition to the arm-flapping surrender mentality of the EU girly-men. He announced that Hungary will hold a referendum on the EU's demand that member countries accept 160,000 so-called Syrian so-called “refugees” for permanent settlement.

Orbán's not just talk, either. He's been fortifying Hungary's border with razor-wire fencing; and last month his Secretary of the Interior announced that they are recruiting 3,000 more border security agents.

As I said, this kind of talk and action drives the EU mandarins nuts. Here's one of them: Jean Asselborn, the Foreign Minister of Luxembourg. Honk from him, in an interview with the German newspaper Die Welt following Orbán's speech:

We cannot accept that the basic values of the European Union are being so seriously breached … Anyone, like Hungary, who builds fences against war “refugees”… should be temporarily, or if needed forever, excluded from the EU.

Dennis Healey, a long-time Labor Party member of the British House of Commons, once described having been criticized in the chamber by Geoffrey Howe, a rather limp and mild-mannered Tory, as "like being savaged by a dead sheep." I imagine a verbal assault — probably even a physical one — by the Foreign Minister of Luxembourg feels somewhat similar.

I note in passing that the German headline on that story reads: Asselborn Fordert Ausschluss Ungarns Aus Der EU — "Asselborn demands the exclusion of Hungary from the EU." Those with an interest in 20th-century European history will note that Ausschluss is the opposite of Anschluss. They both derive from the noun Schluss, a closing or locking. The related word Schlüssel is the German word for "key." With an Anschluss you bring someone in and lock the door behind them with your Schlüssel. With an Ausschluss you throw them out and lock the door …

Sorry, I'm rambling. The wonderfully expressive German language always sidetracks me. Where was I? Oh yes, in Hungary.

Prime Minister Orbán is not the only Hungarian in the news. Meet Mr. Árpád Jeddi. Mr. Jeddi is a truck driver by trade. Last November he was driving his truck from Hungary to Britain. This of course involved him driving through the approaches to Calais, on the French side of the English Channel. 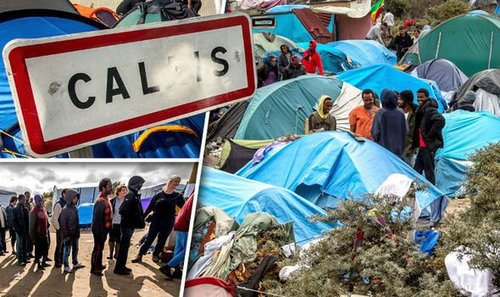 Those approaches are crowded with illegal aliens. There's a huge camp of these scofflaws outside Calais, popularly called "the Jungle," current population over ten thousand. They all want to get to Britain, where the welfare is lavish and sentimentality about "refugees" rampant. To this end, they break into trucks that are headed for Britain, sometimes making the trucks slow down or stop so they can force the doors open or cut through the tarp.

So along comes Mr. Jeddi in his truck, heading for Calais. He made a 15-minute video of the view from his truck along those approaches. Mr. Jeddi is cursing angrily all through the video; but he's cursing in Hungarian, so it's not too distracting for non-speakers of that noble tongue.

It's worth watching that video, to see the scale of the problem. With all respect to Mr. Asselborn, you won't see many pitiful “refugees” dragging their emaciated bodies along, begging for the truckers to throw them a crust. What you will see is gangs of tough-looking young men looking for trucks to break into, and throwing rocks when they are frustrated.

You should watch that video for a feel of what Europe's undergoing.

Mr. Jeddi uploaded his video to YouTube. This is last November, you'll recall. The video was a big hit right away. When I viewed it just now I was the four million and some person to do so. That's not bad for a clip whose voice-over is entirely in Hungarian. The entire population of Hungary is only ten million. A lot of the viewers are non-Hungarian, though, as you can see from the YouTube comment thread.

Well, that video cost Mr. Jeddi his job. See, he's yelling curses at the illegals, and at one point swerves towards a crowd of them in the roadway, forcing them to run for the grass verge. The haulage firm fired him, although we're told he's since got a job driving for a different firm.

Now for some reason Hungarian prosecutors are trying to get him into court. [Hungarian Trucker Who Swerved Lorry At Migrants In Calais Faces Suspended Jail Sentence, Hungary Today, September 17, 2016] They say he should have a suspended jail sentence for reckless driving.

Mr. Jeddi responds, via social media, that when ordinary law enforcement can't contain a lawless situation, citizens have to take matters into their own hands. Watching that video, it's hard to disagree with him, and I bet not many Hungarians do.

So, while François, Herman, and Giuseppe flap their arms impotently, there are at least some Europeans willing to stand up against the invaders. Talpra Magyar!

There is no aspect of the Western world's immigration romanticism more obnoxious than these "refugee" rackets. Not the least thing to find obnoxious about them is that there are genuine “refugees” — helpless women, children, and old people driven from their homes by war and revolution, badly in need of food and shelter.

The word "“refugee”" is not a synonym for "immigrant," though. An immigrant is a person granted permanent residence in a country not his own, with the assurance and expectation that

(a) he will make a positive contribution to his new country; and

(b) he will not be a danger to its native inhabitants or a charge on the public purse.

A “refugee”, on the other hand, is a person given charity in some safe place until he can safely return to his home. If, in the event, he never can safely return, he might reasonably be considered for immigration at some future time.

That sure isn't how the U.S.A. conducts its “refugee” policy. I refer listeners to the website “Refugee” Resettlement Watch, run by the doughty Ann Corcoran, a true patriot and heroine of our time. Ann tirelessly chronicles all the crookedness and bogosity of our "refugee” system, and its dire effects on American towns and cities, and on our country's security.

If common sense doesn't tell you this, let the Director of the FBI tell you. Giving testimony to the Senate Homeland Security Committee last year, Director Comey said in respect of Syrian “refugees” that,

We can only query against that which we have collected. And so if someone has never made a ripple in the pond in Syria in a way that would get their identity or their interest reflected in our database, we can query our database until the cows come home, but there will be nothing show up because we have no record of them.

FBI Director Admits U.S. Will Have No Basis to Vet Some Syrian Refugees, by Melanie Hunter, CNS News, October 21, 2015

That of course is no deterrent to the contractors running the “refugee” resettlement rackets, who have money and careers invested in the game. Still less does it deter our President, who has strongly pro-Muslim sentiments and a gnawing dislike of provincial white prole Americans, bitterly clinging to their bibles and their guns.

And as Ann Corcoran has documented very extensively, that 25,000 will be housed in red states, not blue states; as we Charles Murray fans would say, in white prole Fishtown, not in upper-middle-class Belmont.

The philanthropy of our elites is telescopic. They want to do good to the oppressed masses of the world, but they don't want them living nearby. They definitely don't want their kids going to school with them.

(a) get a worshipful, admiring press from the globalist bureaucrats at the U.N. and elsewhere; not only does he

(b) accelerate the growth of non-traditional America by importing a mass of fecund Muslims into states that voted against him; he also

(c) pokes a finger in the eye of those flyover white people he hates so much.

The American nation is not without its defenders, though. While Ann Corcoran is toiling away in the vineyards of internet commentary, Senator Jeff Sessions of Alabama is striking back from Congress, where the money will be appropriated, if it gets appropriated. Read his statement.

Keep at 'em, Senator. You too, Ann. Thanks for all you're doing here. And listeners, let your representatives know how you feel about this. That especially applies if your representative is one of the weasel Republicans who will happily go along with Obama's scheme of demographic transformation, however much it costs.

Picking up the Hungarian theme again: If you follow my extracurricular activities, you will know that the September issue of that splendid magazine The New Criterion contains a lengthy review by me of a great Hungarian novel, Miklós Bánffy's Transylvanian Trilogy.

One of the characters in that novel is a rather stiff and, as we 1960s survivors were wont to say, uptight lady, of whom the novelist tells us that, quote, "she preferred a waltz to a csárdás." OK, so what's a csárdás? Well, it's a traditional folk dance of Hungary, characterized by dramatic changes of tempo.

Here's an actual Hungarian, the lovely and talented Katica Illényi, playing one of the fast bits.

Nothing like that in the Middle East—or Kenya either, for that matter.