The Curse Of Kaepernick: Football Ratings Are DOWN!

Could it actually be happening? Are American whites finally taking my advice and dumping the Racially Correct football farce? 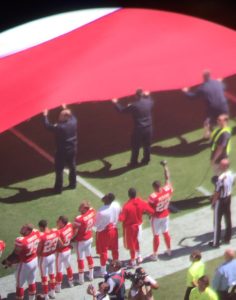 It will take some time to determine if the ratings decline for Week One of the 2016 NFL season represent an anomaly—although I predict panic if this weekend continues the trend. 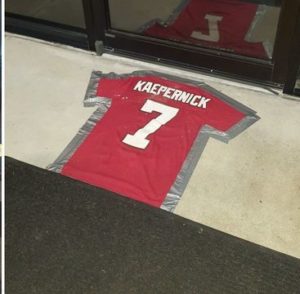 But every time a black player takes a knee or raises a black power fist during the national anthem, something atavistic seems to stir among white sports fans [Cigar lounge uses Colin Kaepernick jersey as doormat, Click2Houston, September 13, 2016]

Perhaps, at first, they are embarrassed by their own revulsion at the sight of black players disrespecting the flag and the nation—which they still believe stands for their interests. After all, they’ve been taught from birth via 24/7 Main Stream Media and Education Industry indoctrination to wallow in their white guilt and feel nothing but adulation for black people.

Anything less automatically qualifies you as a “racist.”

Look what happened to Jewish ESPN analyst Paul Finebaum when, daring to buck the Politically Correct Narrative of eternal white racism, he stated on air that “this country does not oppress black people”:

Paul Finebaum, the ESPN radio and SEC commentator, has apologized for saying, in a discussion of Colin Kaepernick’s national anthem protest, that “this country does not oppress black people.”

“I could spend the rest of my life trying to talk my way out of it, but I can’t,” Finebaum said Thursday on “SportsCenter.” “I blew it. I simply did not have a good grasp of the situation. I know better. I’ve lived in this country, I see what is going on all across the country from North to South to East to West and I have no excuse.

“I can’t explain why I articulated the words the way they did, but I did and there is a public record of it and there’s a natural reaction and I respect that. All I can say is that I made a terrible mistake in trying to express a feeling that I probably — not probably — I had no right to express.”

The Two Minutes Hate directed at Finebaum, who reduced himself to a eunuch in his apology, is quite obviously the official line at ESPN. White broadcasters can do nothing but heap generous praise upon Colin Kaepernick and the “brave” stand he is taking:

“National ‘discussion’”? There is no “national ‘discussion’” to be had, Mr. Berman, given the vitriol directed at your ESPN colleague Mr. Finebaum. He was reduced to declaring he didn’t even have the right to suggest there’s no oppression of black people in America—essentially invalidating the First Amendment when it comes to white people daring to offer counter-arguments against the eternal white oppression narrative that America’s public and suborned private sector continue to assert is real.

In fact, those gatekeepers of enforcing white guilt are downright incredulous that white NFL players, who still represent roughly 32 percent of the active roster spots, aren’t taking a knee with Colin and wallowing in guilt as Finebaum so publicly did:

One way of thinking about the scorn and dismissiveness over the peaceful and clearly articulated demonstration is as a lesson about American society overall: Proximity to African Americans doesn’t guarantee understanding, empathy, or even respectful deference — even in a space like the NFL, where white athletes are outnumbered by black ones.

Perhaps because white players have found proximity to blacks in the NFL anything but a happy experience. Case in point white running back Peyton Hillis, who ran for more than 1,000 yards in the 2010 season, but was racially bullied the entire time:

When asked about the novelty of being a white running back in the NFL on the Dan Patrick Show, Cleveland Browns running back Peyton Hillis claimed that he was often taunted during games for being white.

“Every team did it,” Hillis said. “They’ll say, ‘You white boy, you ain’t gonna run on us today. This is ridiculous. Why are you giving offensive linemen the ball?’ [Peyton Hillis Claims He Was Taunted For Being A White Running Back, Huffington Post, January 25, 2011. Links in original]

Again, we aren’t supposed to believe white athletes can be discriminated against (cough… cough. Stanford running Christian McCaffrey and Toby Gerhart), because that doesn’t fit the carefully manufactured narrative of, in the words of Kaepernick, a “country that oppresses black people and people of color.”

The question we must ask ourselves is this: if the ratings continue to drop for the NFL, will ESPN, sportswriters nationwide, the Main Stream Media, and President Obama himself lecture white fans who turn off the game that they are nothing more than racists and bigots—for defying the programming they’ve been exposed to on a daily basis and refusing to submit their future to non-white empowerment?

Will our Cultural Marxist Ruling Class attempt to shame sports fans the same way the MSM, Hillary Clinton and Obama himself have attempted to shame Trump supporters?

We’ll know in a few weeks the answer to the first part of this question.

But with Trump’s poll numbers having rebounded, we already know the answer to the second part: being called a racist and a bigot has lost almost all of its sting.

Once Americans build up an immunity to this smear, there is no going back.

My further advice to diehard (or casual) NFL fans: when you turn off these games, you might find the weekends far more enjoyable than wasting time worshiping athletes who take a knee or raise a black power fist to advocate further erosion of law and order in America.