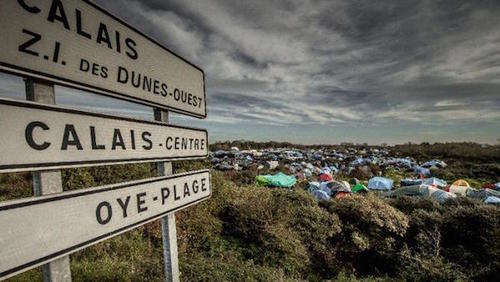 The coastal French town of Calais is unlucky in geography because the entrance to the channel tunnel is located nearby. Thousands of greedy illegal aliens are camped there in an effort to enter Great Britain with its famously generous welfare programs.

Mostly what we hear from the media is the boilerplate sob story about suffering invaders looking for a better life (on somebody else’s dime). But this time RT interviewed French locals who are living in dangerous circumstances because authorities are not willing to deport violent foreigners. In fact, the government is building infrastructure for the camp rather than prioritizing safety for French citizens.

TV HOST: France’s biggest refugee camp in the northern port of Calais has seen three nights of clashes between riot police and migrants seeking to cross into Great Britain. Dozens of officers have been injured and additional police have been deployed to provide security. Such violence between asylum-seekers and police has got locals concerned about their safety too. Our correspondent Laura Smith found out when she visited the so-called jungle camp.

SMITH: Life goes on here in the jungle in Calais behind me. You can see a game of football being played out those boys riding around on their bicycles, but last night the scene here is very different. There was some quite significant unrest just in this area here. What started off with around 10 Kurdish men, we understand throwing rocks, turned into quite a significant disturbance. I’m told that it’s a tinder box here, essentially any disturbance no matter how small can eventually turn into something quite significant, and last night was the third consecutive night of violence during which police fired tear gas.

Meanwhile though, six or seven kilometers away is the town of Calais. The mood in Calais is really turning against this settlement here. The mayor in fact has called for the army to be sent into the camp and of course the people in Calais are becoming increasingly discontented with what they see as the inaction of the authorities to deal with this.

JOHNNY PIETIN (local resident): They turned over the cars. In the streets they went as far as hitting the cars and they broke windows. Moreover shops are suffering major profit losses. On top of that, the threat of being physically attached is felt everyday. Unfortunately, I can say we’re almost in a state of war.

SMITH: The family that lives here don’t want to talk themselves about the attack that took place on their house, but Aurelie Langlois has agreed to tell us the story herself.

AURELIE LANGLOIS (local resident): There was noise. Stones were thrown at the walls, smaller rocks at a car. I started to wonder what was going on. The children were crying. Two children aged two and four. A man came out — I don’t know if you can see that there, but there isn’t like the cable here — so he came out and he was surrounded by migrants, illegals. They threatened him. A woman made a film there on Sunday night when there was trouble. This woman wanted to do the same; she wanted to film. But they made a death sign and said to her, you are dead if you film, and if you call the police you are also dead.

SMITH: There’s around six and a half thousand people living in the jungle at the moment. It’s all calm as I say at the moment but if we just swing round here a little bit you can see the police just there in the distance very watchful. Battle lines maybe being drawn for another night this evening.

The news clip below from EuroNews shows a young left-wing activist saying, “We may be facilitating a rebellion.” Also interviewed is a Calais resident who barricaded his home against rioting outside and said, “It’s becoming unbearable, unlivable.”

The French Channel port of Calais is struggling to cope with the thousands of migrants living in a makeshift camp waiting for an opportunity to smuggle themselves across the Channel to Britain.

Frustration has often boiled over and there have been several nights of clashes with police.

France has accused activists of inciting unrest. The interior ministry says militants calling themselves “No Borders” which is a far-left group that opposes border controls, are exploiting the misery of migrants and encouraging them to riot and to commit violence against the police.

However other activists working in the migrant camp see the situation differently. Rick Mellang of “Yorkshire Aid” said:

“We may be facilitating a rebellion at some point. Essentially, we distribute supplies which facilitate people to jump fences. If we do not give out these supplies these people will freeze to death.”

Meanwhile Calais residents are growing more fearful of the violence. One man said he and his family barricaded themselves at home when around 200 people fought with police outside:

“I hope they do something to make them leave. I don’t think they will, but I hope that at least they’ll increase security measures to keep them from coming here or to keep them in their camp. Because it’s becoming unbearable, unlivable.”

Locals have formed a solidarity group called “Angry Calais Residents” in support of law enforcement, hoping police will stop migrants from entering the nearby housing estate.