On Saturday, several dozen French citizens occupied a mosque under construction in Poitiers, and raised a sign demanding an end to Muslim immigration. 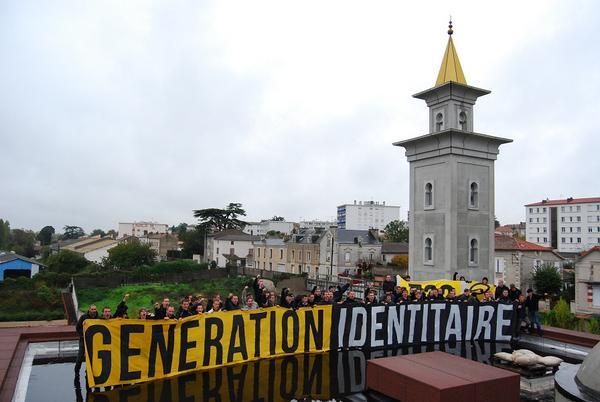 Poitiers was the site of the civilization-saving battle of 732 when Charles Martel defeated the Muslim invaders and chased them out of France.

More recently, however, post-war Muslim immigration into Europe has erased the advantage gained by Charles Martel. Now Poitiers is on its second mosque, no doubt because Muslims like to mark territory with Islamic edifices.

Generation Identitaire, the group mounting the protest said in part (translation from Galliawatch):

Almost 1300 years ago, Charles Martel stopped the Arabs in Poitiers after an heroic battle that saved our country from the Muslim invasion. It was October 25, 732. Today the choice is the same: live free or die. Our generation refuses to see its people and its identity disappear in indifference. We will never be the Indians of Europe (i.e., the American Indians.) From this place symbolic of our past and of the courage of our ancestors, we are launching an appeal to remember and to fight!

We do not want any more non-European immigration or any new mosques constructed on French soil. Since the first waves of African immigration and family reunification in 1974, our people have never been consulted on the populations they are forced to live with. Massive immigration is radically transforming our country: according to the latest INSEE study, 43% of those 18-50 years old in the region of Ile-de-France are immigrants or their descendants. A people can overcome an economic crisis or a war but not a replacement of our population: without Frenchmen, France no longer exists. It’s a question of survival: it is why every people has the absolute right to choose if it wishes to accept foreigners and in what proportion.

Since we have been refused this right and our generation is paying the high price in the street confronted with threats from the scum, we say: that’s enough, we will no longer back down! We demand a national referendum on immigration and mosque construction in France. We will not leave this place until we are heard.”

Naturally the press characterized the protesters as “far right” or worse, but the dramatic action has gotten worldwide attention.

Around sixty members of an extreme right-wing group stormed the site of a future mosque in France on Saturday, to protest against what they see as Islam’s increasing influence in the country.

According to French media, protesters from a group called Generation Identity occupied the building site in a suburb of the town of Poitiers, western France, at around 6am.

They climbed onto the building’s roof and displayed a banner marked with “732 generation identity” in reference to the year 732, when Charles Martel halted the advance of the invading Muslim army to the north of Poitiers.

The group makes their views clear on their website, which bears the statement: “We do not want more immigration from outside Europe or new mosque construction on French soil”.

The protesters apparently took to social media site Twitter, declaring they would not be leaving the mosque until they were removed by the authorities.

But the demonstrators left the site around 1pm after reaching an agreement with police. Three members of the group were subsequently arrested.

France’s Interior Minister Manuel Valls denounced Saturday’s dawn raid, describing it as “hateful provocation”, while Prime Minister Jean-Marc Ayrault “strongly condemned” the act, saying it was against “the French Republic and its values”.

Both the country’s ruling Socialist Party and the Communist Party have called for Generation Identity to be dissolved. Prosecutors in Poitiers are examining whether to press charges against the group for “holding an unauthorized protest and inciting racial hatred”.

“This occupation was wild and illegal and was accompanied by the shouting of hostile slogans against Islam and Muslims. It is the first time this has happened in the history of our country,” said a statement from the CFCM, France’s main Muslim organisation.

“We are deeply concerned about this new form of anti-Muslim violence which demonstrates, once again, the willingness of these factions to risk our national cohesion by inciting hatred and division,” the statement read.