On Thursday, Tucker Carlson opined briefly about a recent Pew poll that shows a growing divide regarding how Americans across the political divide think about our social institutions. Republicans in particular have come to believe the influence of universities on America has become harmful.

Tucker: it’s a big deal when a country’s elites reject their own people. It’s an even bigger deal when the people reject them. pic.twitter.com/2ieZ1Tqw3p

TUCKER CARLSON: Our country’s most powerful institutions have hated the rest of the country for a long time. When the people who run tech companies or Hollywood studios look out the window of their G5s they commute from Santa Monica to Teterboro, they see a population that’s fat, bigoted and dumb. They feel pure contempt for the people below them.

Well now at long last middle America is returning those feelings. A new poll by Pew finds that Republican-leaning voters have come to distrust the higher education establishment a lot: 58 percent of them believe colleges and universities have a negative overall effect on the country; just 36 percent think they have a positive effect. It’s a swing of about 20 points from just two years ago.

Okay you say, that’s just because stupid uneducated conservatives naturally hate schools they could never get into — right? Wrong. Actually Republicans with college degrees are even more hostile to college than those without them because they know how bad it is.

But if colleges have lost the confidence of non-liberals, consider the media: 85 percent of Republican voters say the national news media are hurting the country. Once again, a substantial swing from just a few years ago. Republicans aren’t that impressed by labor unions either, or banks remarkably.

The only institutions that are still viewed positively by both sides of the spectrum are churches and religious groups, and yet those institutions are the ones that are losing power in America.

Now these sentiments are not pointless trivia, not numbers that mean nothing a country can actually thrive without strong respected institutions it’s a big deal when the country’s elites, whether in media or business or education, reject their own people but it’s an even bigger deal when the people reject them.

Republicans and Democrats offer starkly different assessments of the impact of several of the nation’s leading institutions – including the news media, colleges and universities and churches and religious organizations – and in some cases, the gap in these views is significantly wider today than it was just a year ago.

While a majority of the public (55%) continues to say that colleges and universities have a positive effect on the way things are going in the country these days, Republicans express increasingly negative views.

What’s interesting is how rapidly conservatives’ opinion of higher education has fallen — like a rock! 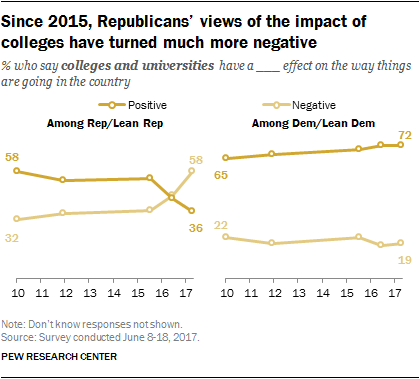 Why is that? Perhaps some citizens are alarmed at the news from America’s campuses which has increasingly been a disturbing mash-up of anarchy, race-segregated graduation and a leftist curriculum more akin to Marx than Milton.

Rather than being places to explore a wide range of ideas, today’s campuses permit liberal values only with appalling levels of censorship. They are creating a generation of fragile kiddies who require a handy safe space where they can hide from challenging thoughts.

Also disturbing to friends of free speech was the protest at the University of Missouri in November 2015 where a professor of communications called for “muscle” to rid her of a student reporter with a camera (Watch.). These libs with tenure are thugtastic! 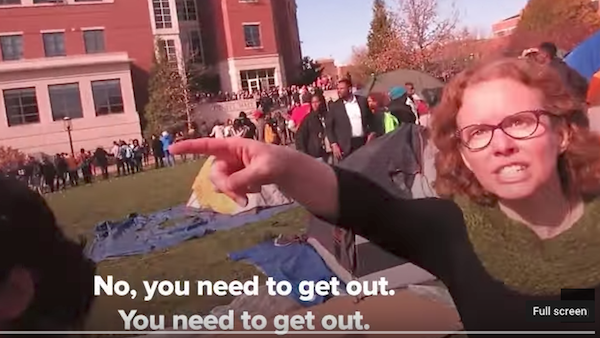 In May, Professor Bret Weinstein appeared with Tucker Carlson to discuss the prof’s disapproval of Evergreen State College’s strongly worded request that all white people leave campus on a designated day — he thought the order was racist for some reason. More recently, it was reported that other faculty wanted Weinstein to resign for being such a troublemaker.